Consider a Tree: It Leaves

Further news : After Chokri Belaïd’s assassination on Feb. 6, the Tunisian Prime Minister announced that he would form a new government of independent technocrats (which the opposition insists upon) to run the country until elections could be organized, thus putting aside his allegiance to the ruling religious party. His party did not support him and sabotaged his efforts, thus requiring him to resign.
The ruling religious party then proposed the Minister of the Interior to become Prime Minister and form a new government within two weeks. When a Minister of the Interior moves up, it usually signals something worse to come. Although the new Prime Minister attempted to find new alliances and partners among the opposition parties, all refused except for the two parties that currently form the ruling "Troika" alliance and have high stakes in the government. Last Friday, the Prime Minister announced his new cabinet of 30-some ministers, which will undoubtedly increase up to the preceding 80 ministers (!) once the cabinet is approved by the Constitutional Assembly. This new cabinet can be described as totally incompetent for the job of running a government. Musical chairs comes to mind. Supposedly, independent technocrats filled key ministries (Foreign Affairs, Defense, Interior, & Justice), however, it is common knowledge that those people actually favor the ruling religious party and are therefore not independent. So childish.
In the meantime, international banking institutions are turning their backs on Tunisia as rankings sink, inflation continues to push prices up, unemployment continues to rise, salaries continue to stagnate for those who have jobs--with the exception of the Ministers and Constitutional Assembly members. There remains little hope that the government of the ruling religious party can affect any sort of change or improvements, and, even more worrisome, future elections for a permanent government are not being planned. The country continues to limp along in a netherworld of "transition."

And so, I bury myself in my art. I finished stitching on the twelfth and last segment of pomegranates. 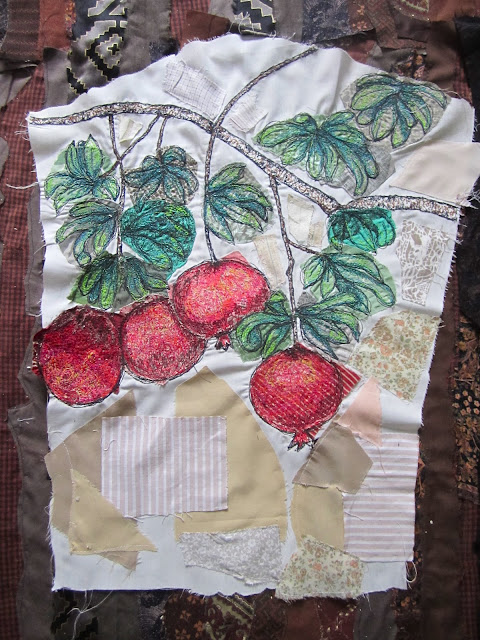 Stitching on the pomegranates inspired me to play with thread just for the fun of it in my sketchbook. 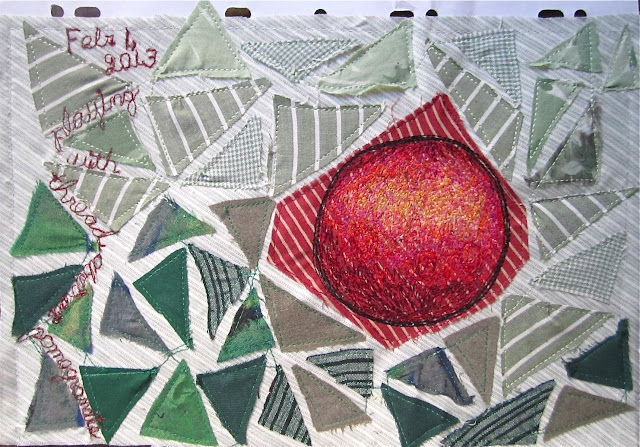 Ahhh, those shiny threads. An abstracted pomegranate (or a red ball)--pure pleasure. 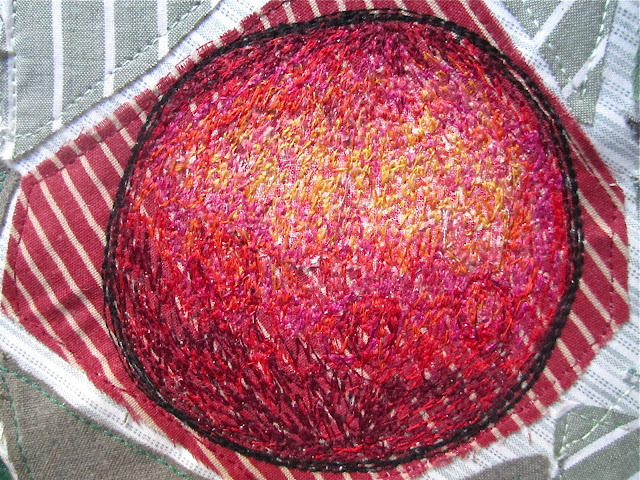 Pomegranate leaves provided the next idea for the sketchbook. 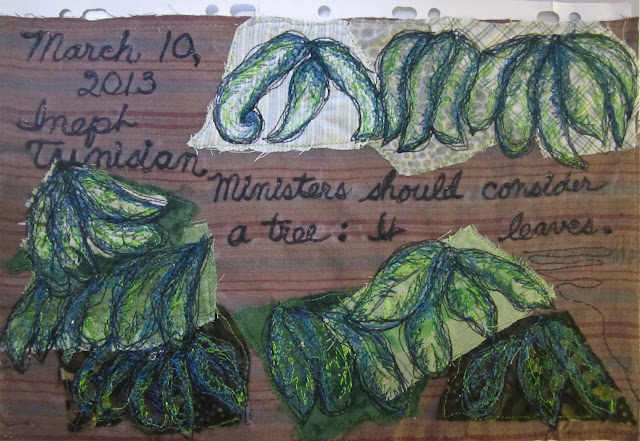 However, the political scene informs this page. It reads: "Inept Tunisian Ministers should consider a tree: It leaves." 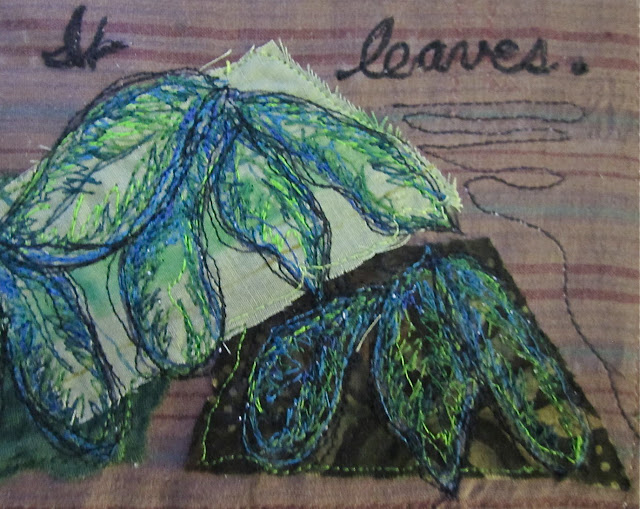 Difficult to resist playing with words. At this point, that may be all that Tunisians have...words....
Labels: Art quilts, sketchbook, Tunisia

Your artwork is beautiful, as always, and I feel your pain with the government. It seems the whole world is in a state of flux.

I like your pomegranate, and i feel with you for the trouble of the government.

Love the details and the colour palette of the pomegranates!

Love your pomegranates art piece!! I have never seen pomegranate leaves, but I love the fruit!!!
On one of your previous posts I mentioned I did not hear about the assassination on our news, but later that day it did make the news, so I guess I heard it from you first, blogland, who would have thought! It's sad when power sits alongside self-interest; the power is wasted and the self-interest is a waste of time - the populus gains no benefits at all......

Oh, Nadia...TBTG you have your art...and your wonderful art! Pls stay on your farm all safe with your olive trees and mosaics and your pomegranates. Should I send something to you? Thread? Fabric? I could try..let me know...

Filling your time with your amazing art can help to push the turmoil of the country from your every thought although it must be hard to live with such uncertainty.

Nadia, I Love your pomegranate, and particularly what you have done with the leaves.

I love your art with a message. In Japan, too, those appointments go to people who were high mucky-mucks in business, retired with big benefits, and now get big bucks sucking up to the politicians. The Japanese word for them means " those descended from heaven". hey are out there raising taxes so we can pay for their "services". At least there is no fighting!

Thinking of you, Nadia - xxoo, sus

What a terrible time. Sorry to hear the news. The poms are beautiful. This last panel for the cloth/quilt is my favorite I think. Love the leaves too.
Thinking of you.

I weep for your country and pray for wise leaders. I wonder if art could be part of the solution? Take care, Nadia. xo Carole

Every time I hear "Tunesia" I think of you/ Have been keeping up with BBC and other news sources. Your art, your stunningly accomplished art is just the best thing ever, as all art is. this New Yorker, helpless as a newborn in her dotage, sends love.

Amazing piece of work! Shame it can't be said about your government :-(

Beautiful work - the pomegranate or ball - so well done.
Inspiring. Always regretting the difficulties in your country - it began so hopefully a year (or was it more?) ago.

amazing work as always - the colours are beautiful!

Nadia, YOUr work inspired my small steps in play with thread painting. Your message is bold!

Nadia, I found your blog from your comment on mine... I see why you wish you could go on a retreat too. I Love your mosaic planters and your Pomegranates and leaves... It looks like you have made a little retreat for yourself right at home... Art and gardening are great things to bury yourself in... Praying political things improve soon!

Oh, nadia! Are you and yours safe? I DO hope so. We hear about Tunisia on the evening news and I keep thinking of you. You are fortunate to have such a grand diversion. Keep up the good work. The pomegranates are stunning! Really beautiful? Well done you! Be safe.

I love your word play. LOL But unfortunately your political comments could apply to many other nations in this day and age. It's all so sad. It's like the whole world is in a shark tank.

Hello Nadia
Your work is so nice especially the leaves. I like your way for recording Tunisian situation.
All the best
Najlaa

miserable political and living situation. glad you have the means to make such beautiful art.

Nadia, I am a tree and leaf kind of gal, and I'm loving this piec with all the collage and abstractness that you're doing.
I too and concerned for you and your family. Praying for you all.

What a sad confusing mess it all is, I couldn't hope to understand it all. Your pomegranite piece tho, is a delight, a sight for sore eyes & totally understandable ;)