Bear With Me, Part 3 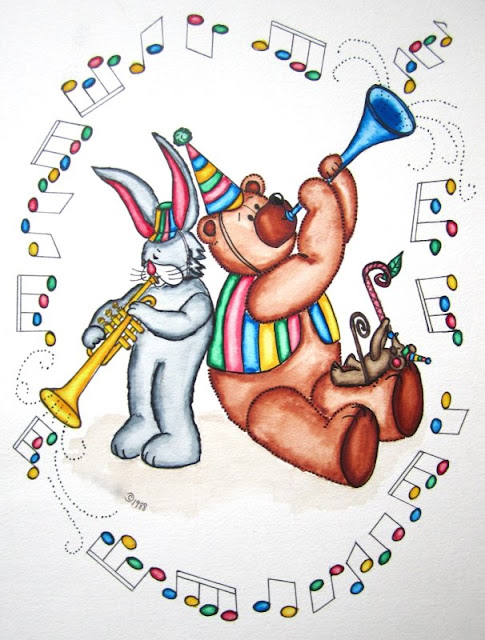 Bear With Me, Part 2 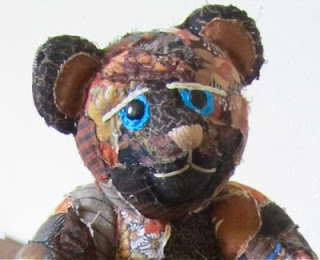 So my teddy bears traveled from the States to Tunisia in a suitcase many summers ago. One little 11-in/28-cm pink bear began looking shabby because it was made out of a synthetic fleece that pilled. 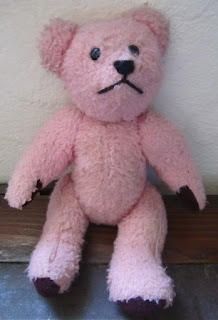 Having a deep respect for the way the joints are made (getting the joints tight challenges patience), I couldn't bear seeing this bear on the downhill. Time to recycle: 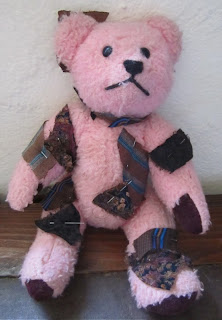 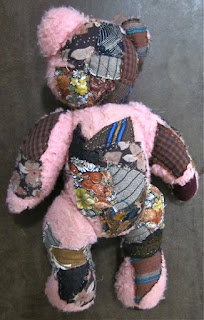 The fabrics came from my collection of recycled flea market finds.
As I was tired of the pink, I went back to the traditional brown...sort of. 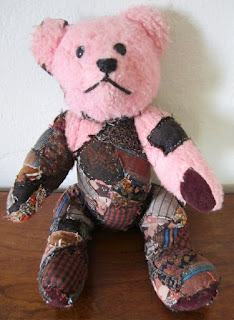 With a long needle, I used a sort of running stitch/back stitch to sew down the patches. A beast to do! 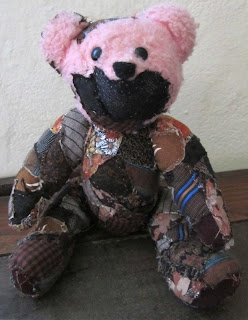 Given the times, I would name the bear at this stage the "Censored T. Bear." Working on the face was a bit disconcerting: dolls and bears seem to pick up a bit of personality of their own. I kept telling myself that I didn't believe in voodoo dolls and that this toy wasn't drowning under the fabric! 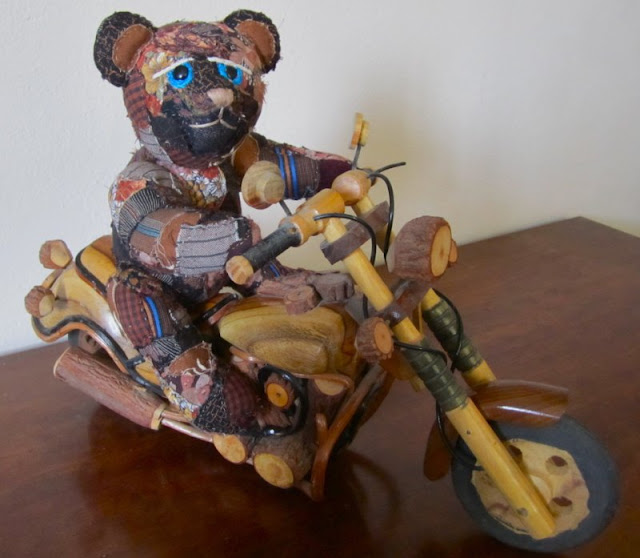 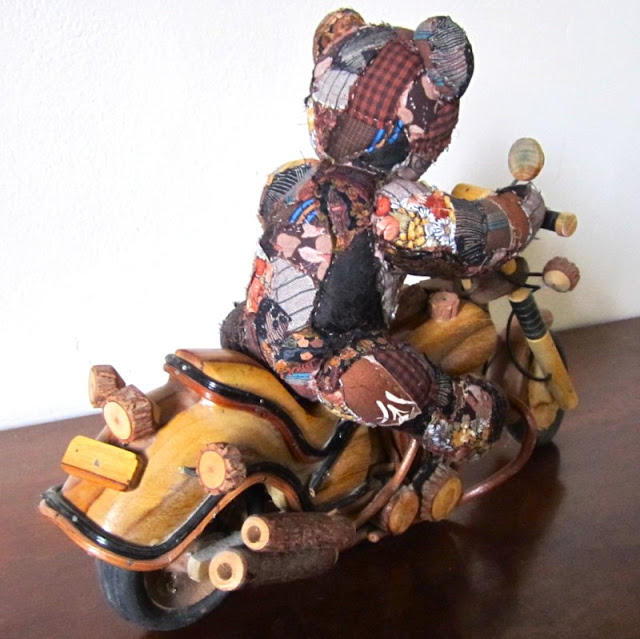 And the T. Bear rides off into the sunset....

Bear With Me, Part 1 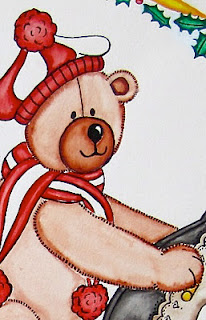 'Tis the season...to wear wooly sweaters and create, give, or play with cuddly, fuzzy toys. Therefore, this seems a good time to bring up the subject of teddy bears. Like many crafters, my mom went through a teddy bear phase in the 1980s--and I got caught in the ricochet. I even did a number of drawings and watercolors.
In her usual, enthusiastic manner, she bought numerous books and fabrics, collected patterns, and made bears. As she was a chain knitter (otherwise she would have been a chain smoker), she collected knitting patterns for the bears’ clothing and accessories as well. During one of my summer visits, then, we had a teddy bear 'workshop' in which we chose several patterns, bought fabric, and then, we each made bears. 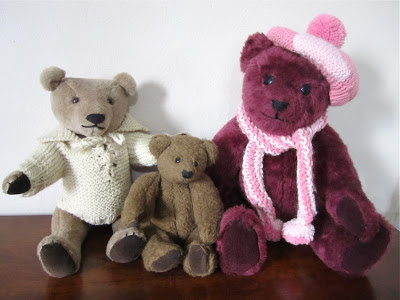 My mom's bears were better. She could do anything if given a pattern and so she made many and became an expert. 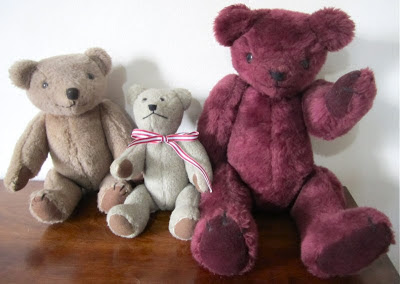 Here are my three "twin" bears. I inserted a music box with “The Teddy Bears’ Picnic” song into the burgundy bear.


My mom must have given most of the bears away as gifts, but the ones she made with me that summer always stayed with her. And I never understood the significance of that until I shared this story with you. They were “family,” she had made them with me. 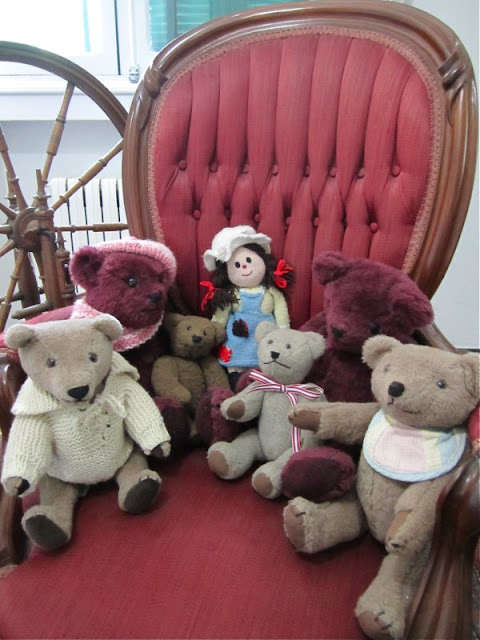 Now the bears are reunited and sit on my grandmother’s chair with the Cinderella doll that my mom knit from a pattern.

And may you have a Bear-y Happy Holiday Season with your loved ones! 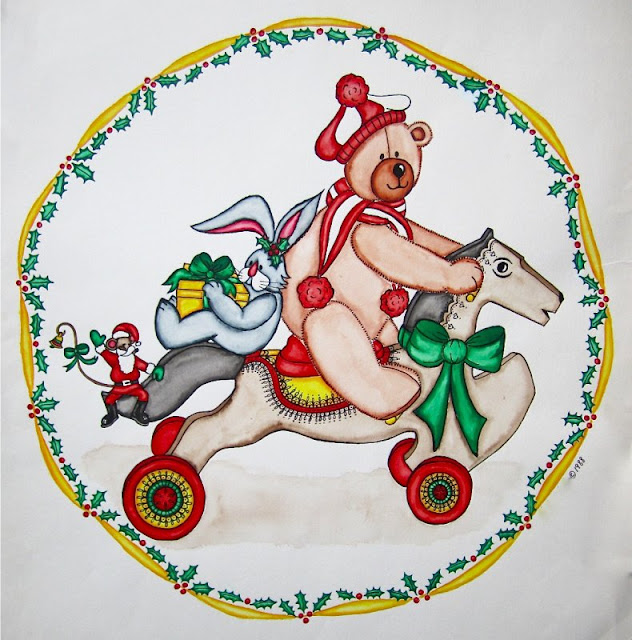 News Update: A Rocky Road Ahead

The news took over this week.


Concerning the Arab Revolution, there is some good news. Yemen’s dictator Salah finally negotiated with the opposition parties to leave power and the country. OK, so he’s gone. Problem: his family and the whole power structure remain in place. Elections have been promised in two months, however, if the current government runs those elections, then nothing much will change. The people have not bought it and continue to protest and civilians continue to die everyday. It’s a rocky road ahead.

Dozens of Syrian civilians also continue to die everyday while peaceful protests continue. Unfortunately, the US government may attempt to weigh in on the side of the revolution in order to maintain influence in the region, giving the revolution a bad name (messy politics in this part of the world). Hard to predict the outcome. I salute the courage of the Syrian people. It’s a rocky road ahead.
Egyptians protested in Tahrir Square once again to oust the prime minister, viewed as a Mubarak supporter. So the ruling military council (which basically has a death grip on the country) named another prime minister who had served in the Mubarak government—unacceptable in the eyes of protesters, as one might imagine. In the meantime, Egyptians elected a parliamentary assembly to formulate a new constitution. However, the military council intends to have the final say on any proposed constitution. The military council (Mubarak’s cohorts) obviously wants to keep power, influence, and wealth. It’s a rocky road ahead.
The new transitional Libyan government is having difficulties bringing armed groups under control and collecting weapons, while trying to form a new army. Tripoli is under lockdown and militia groups have been asked to return home. Armed groups have attempted to cross the border into Tunisia and when refused, have been known to open fire on authorities. Tunisians living in towns along the Libyan border, the very people who opened their homes to Libyan refugees, appear to be fed up with the lawlessness that war has unleashed. Tunisian authorities have closed the border until the Libyan government can send competent authorities to control the situation.
Members of Tunisia’s constitutional assembly seem to have forgotten that their role is to write a new constitution. A tug of war has developed as certain groups demand a “piece of the cake” in the new government. In the meantime, the Central Bank has issued warnings that the country is on the brink of bankruptcy and protests continue to cripple the economy. Liquid bottled gas, which many people use to cook and heat, has become scarce as temperatures drop.
As if there weren’t enough urgent problems, a university in Tunis closed temporarily because bearded men beseiged it, demanding that women students wear a “niqab” (black fabric covering the head and face) if they wanted to take their exams. I would first comment that I have nothing against women who choose to “veil”, that is, wear a headscarf and modest clothing if that is their choice. One’s clothing should not get in the way of attending school, voting, working, or anything else for that matter. However, attacking university women and imposing a way of dress—which has no foundation in Tunisian tradition, by the way (this comes from the Gulf)—impinges on women’s rights. History shows that the attack upon women is not a question of religion (Islam preaches moderation), but rather a bid for power that makes use of women as pawns. Why don’t they go and empty the numerous bars of drunken men? It seems these men perceive university women not only as a threat but  the “weakest link” as well. Economic and social classes also enter into the question, as new groups struggle to fill the power vacuum and push aside established upper and middle classes.

And I would venture to guess that Tunisia is doing better than anybody else.
Indeed, it’s a rocky road ahead.
25 comments:
Labels: Libya, Tunisia
Newer Posts Older Posts Home
Subscribe to: Posts (Atom)