During the next few weeks, I would like to occasionally feature a few of the talented and generous people I met during my travels. I must begin with Patty who welcomed me in Knoxville, Tennessee. I had stumbled upon her blog (here) and had asked her about guilds and fabric shops in the area…and that’s all it took. She took me to the Thursday Bee and the Smoky Mountain Quilt Guild. In addition, we did a tour of quilt shops and she took me to her home where she has a beautiful studio which was originally the living room of the house--this woman has her priorities straight!

Not only is Patty a professional hand quilter, but she possesses quite a selection of quilted clothing. I particularly liked her coats of which these are a small sampling.
A lovely evening coat of velvet.          A sassy blue coat and hat, taken in her studio. 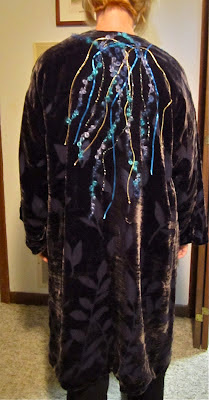 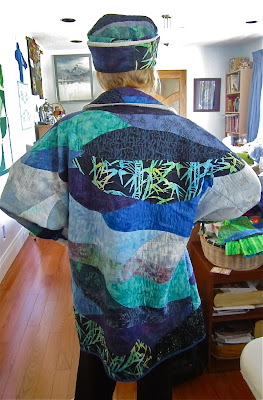 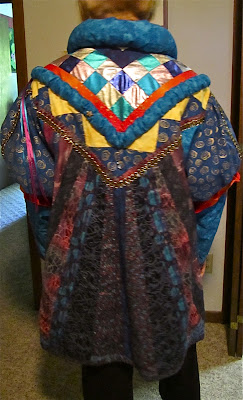 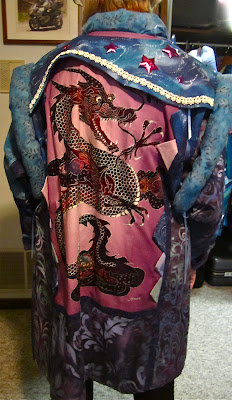 Here are a few of her beautiful quilts. Patty has a liking for Hawaiian motifs and everyone knows I have a fondness for appliqué. Hers is impeccable. 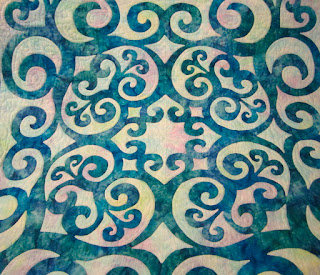 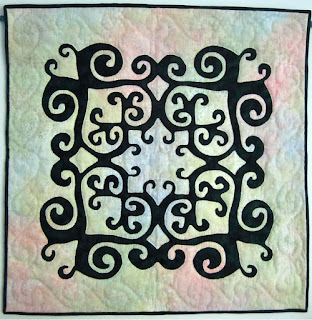 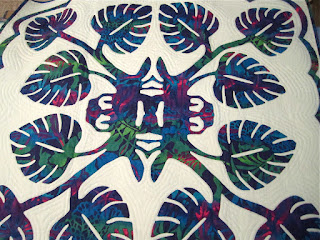 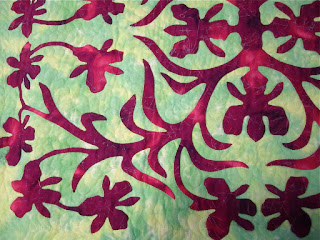 Patty is prolific. She must have a hundred quilts stored away. 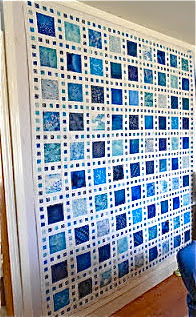 My heart skips a beat when I look at this square quilt.
Her circle quilts are equally captivating. 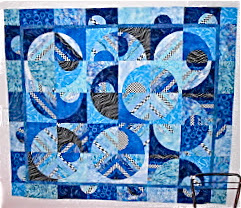 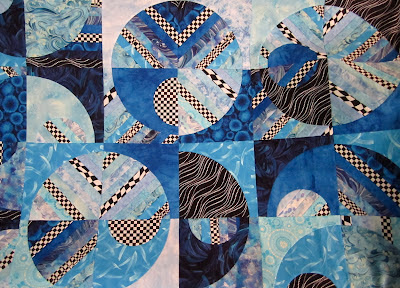 This one is titled "3rd Day of the Universe."
Can you guess Patty's favorite color?

So thank you, Patty, for making my trip to the States memorable.
Did I have a good time!

Yes, one year ago today the tranquil Province of MulticoloredPieces came into existence.  Easier said than done—it took about forty years of work/play to get to this one year. When I hesitatingly started out, I calculated that I had enough material for about a year. However, it would appear that there still remains enough material to get through another year.
In my peregrinations, various blog birthday presents crossed my path. 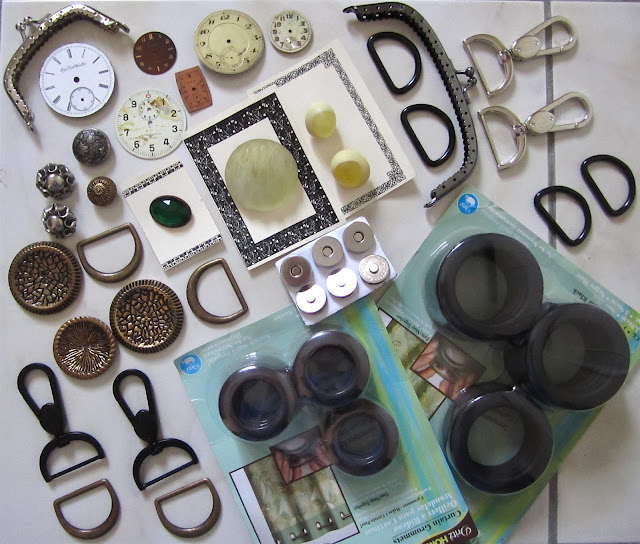 Many useful items for future play and posts beckoned to me. Purses seem to be in the future so I purchased the hardware for straps and clasps. Old buttons showed up--notice the two round, yellowish buttons that look like eyes? Bizarre and irresistible. No idea what I'll do with them. The old watch faces are for a piece about time that has been simmering on the back burner for too long.
And who could resist the fabric in those beautiful American quilt stores ? 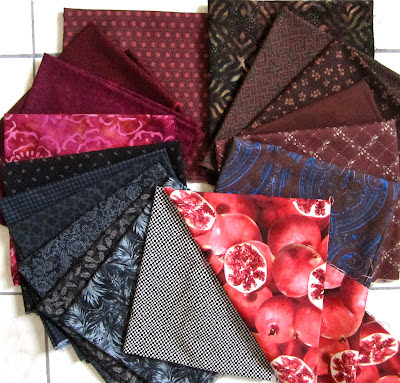 I truly restrained myself, buying only with my pomegranate tree quilt in mind. OK, I threw in a few blacks because they're always useful. I may never use the pomegranate fabric, but, I knew that I would regret not buying it once home.

What have I learned in this year? Probably like everyone else, I’ve enjoyed the making of new friends and having art/quilt shows available at my fingertips. I’m astounded by the creativity of artists/artisans around the globe and their generosity in sharing ideas, techniques, and information, in allowing visitors into their lives. In addition, the diversity is invigorating.
Of course, I didn’t realize the amount of work a blog would require, however, one post a week for three weeks, then a week off feels right to me. I find this blog keeps me on track and focused. For a long time I created my art quilts in a relative vacuum. Now a window on the world has opened and I can illustrate my blog with my artwork. Indeed, MulticoloredPieces has become an artistic endeavor, my form of an artistic chronicle.
Looking back at that first post, I feel the need to revisit that monster of a quilt, Flowers for Abou Jihad (Nov. 1993, 79”x79”) maybe because the colors go well with the above watercolor painting and perhaps because it remains engrained in my soul due to its size and the three-year gestation period (worse than kids).

This piece moves on its own if you look at it long enough; it seems to generate energy as if it's going to swirl away to an exciting future, as I hope MulticoloredPieces will do as well.

I would like to take this opportunity to thank all followers, readers, and visitors. You have made this birthday magical just by your virtual presence.
41 comments:
Labels: Art quilts

I'm back. I returned to the tranquil province of MulticoloredPieces after six weeks in the States visiting family and meeting blogger friends (more on that in later posts). It was a blast, but, living out of a suitcase leaves much to be desired. Basta!
I found a great deal of garden work as summer approaches, and so, I'll be busy outside for the next few weeks. For the moment, I'd like to return to my diatribe on the beach. Even though I'm thankful to be back in Tunisia, the beach remains as unappealing as ever. Probably because of the sand. Sand is useful for making glass, I suppose, or for adding to the clay in my garden. Beyond that…?
Well, yes, beyond that:
At the beach, the vistas are spectacular with the melting of the blues of the sea with the blues of the sky at the distant horizon. "Sea, Sand, and Sky" (March 1995, 56"x64"/1m40x1m62) reflects my attempt to capture that.
The irregular log cabin blocks of the background are constructed in brocades, satins, and other fancy fabrics along with some cottons, in order to give a bit of shimmer to this piece. The colored, raw-edged sections are cottons from used clothing. That uneven bottom edge presented all sorts of technical problems--a beast to do, but well worth it. Admittedly, then, the beach is good inspiration.
20 comments:
Newer Posts Older Posts Home
Subscribe to: Posts (Atom)