Magic Carpets: The Wild Ones 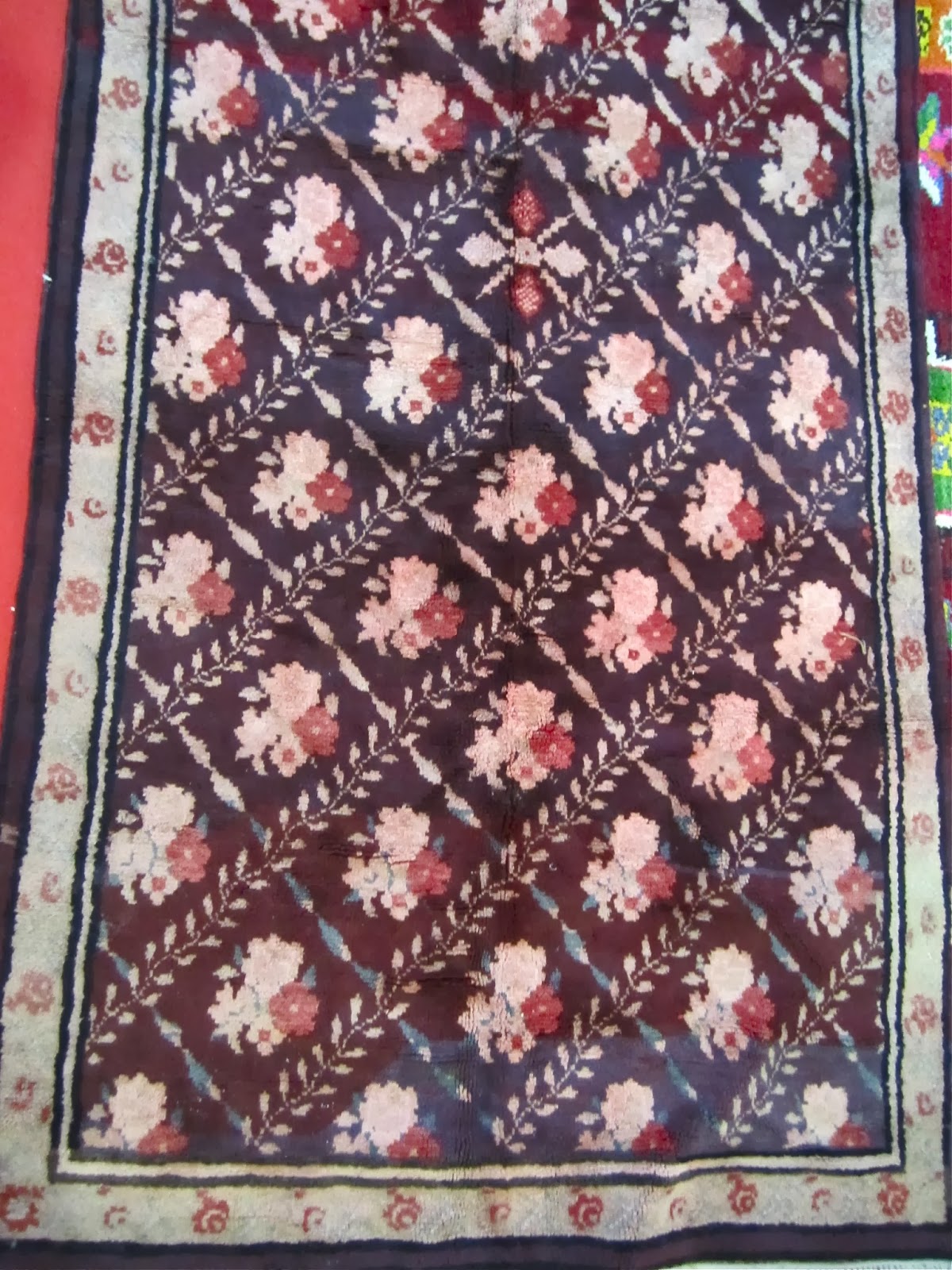 Saving the best for last. In the official carpet and rug world, these pieces would probably be classified as outsider art. Untamed designs and the wild use of color point to innocent genius.

The most sedate of the group, this pile floral rug has lost a lot of its color. Notice the leaf designs that create the grid for the flower motifs: small leaves similar to a feather design running in one direction, and single leaves end-to-end in the other direction.

The ragged edges on the next rug suggest that it has received much wear. 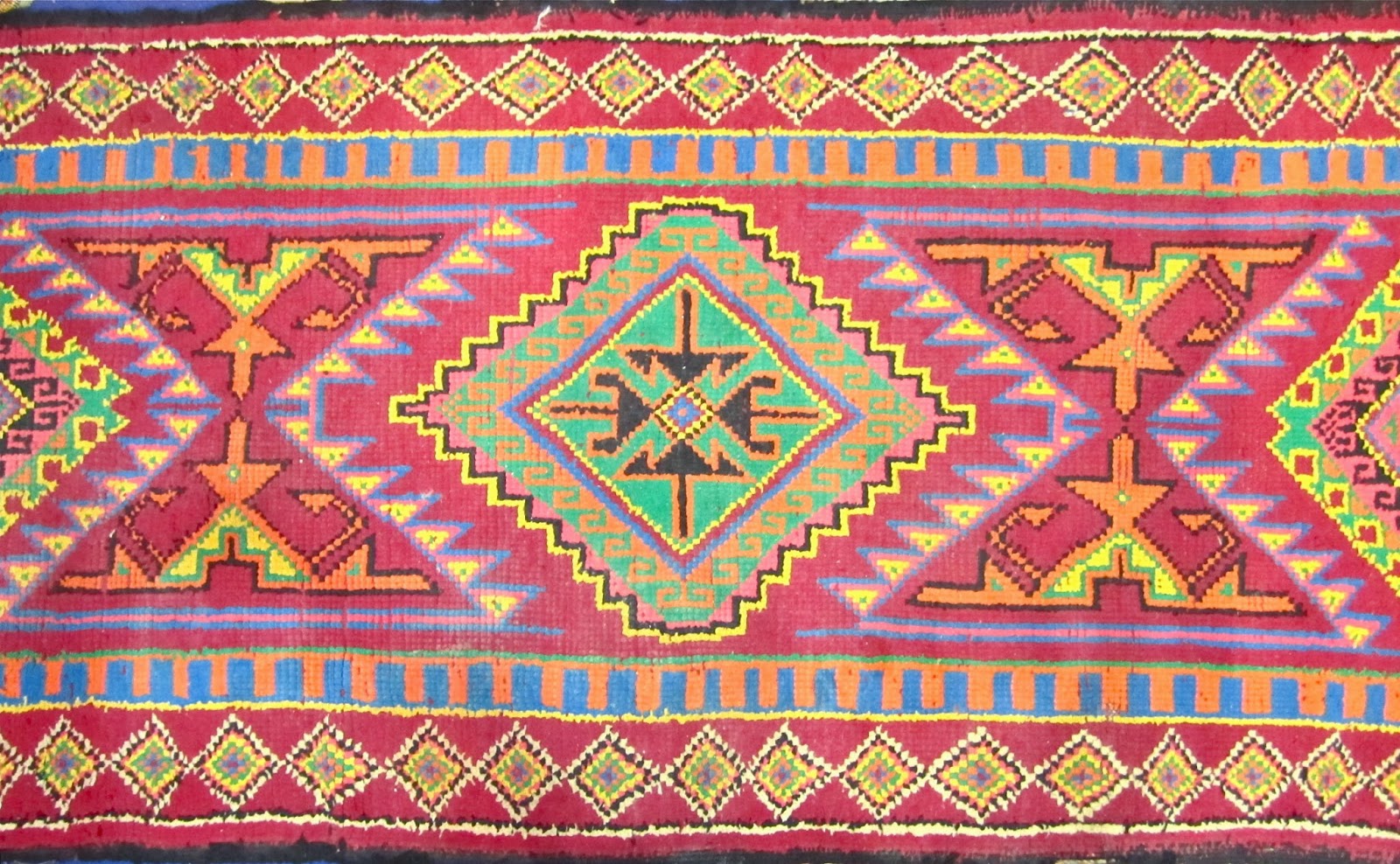 It must have glowed in the dark when it was new! 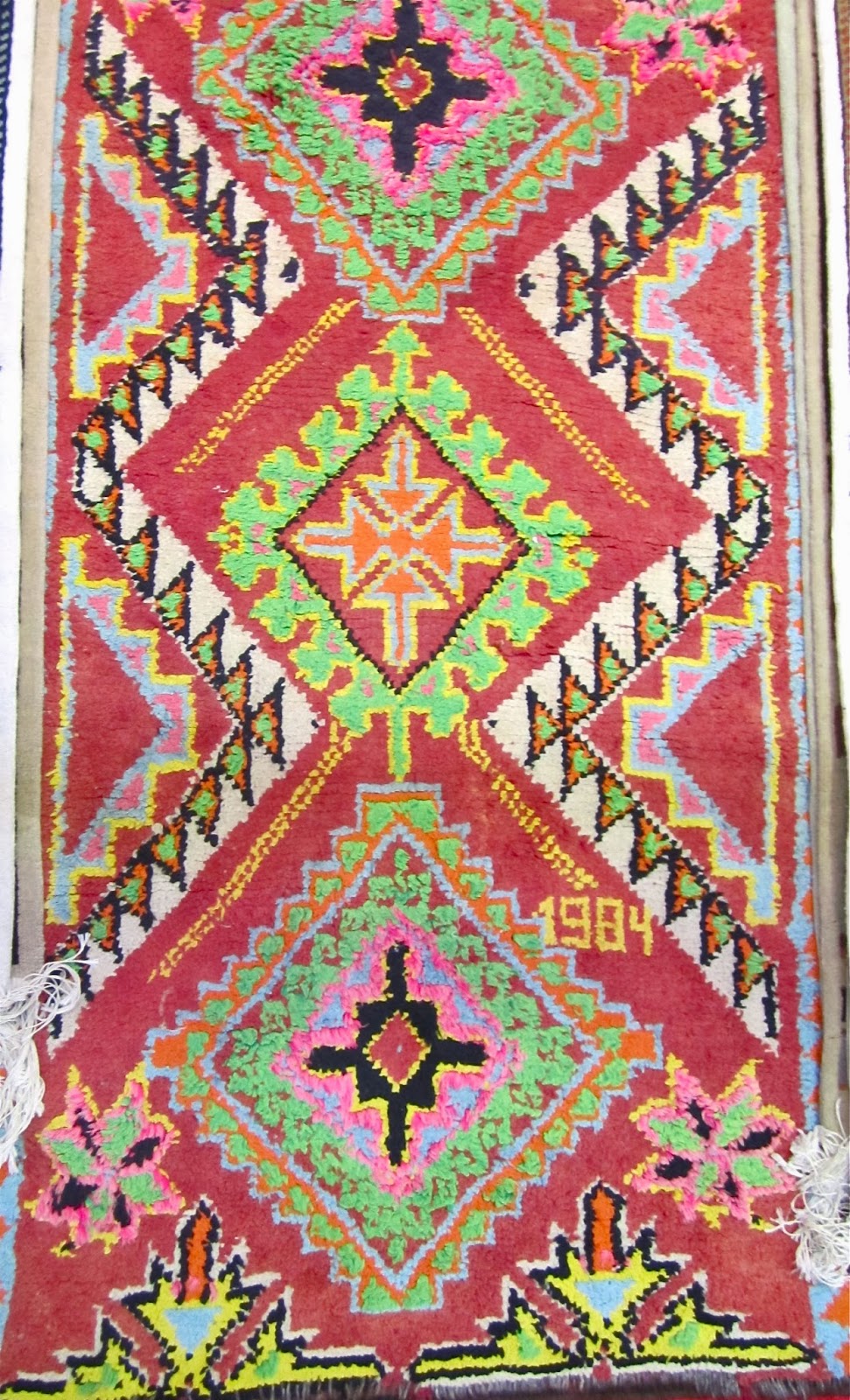 One rarely finds dates on rugs so this pile rug is unusual with its "1984" worked into the design.

This dark pink rug still sings and dances despite years of wear. 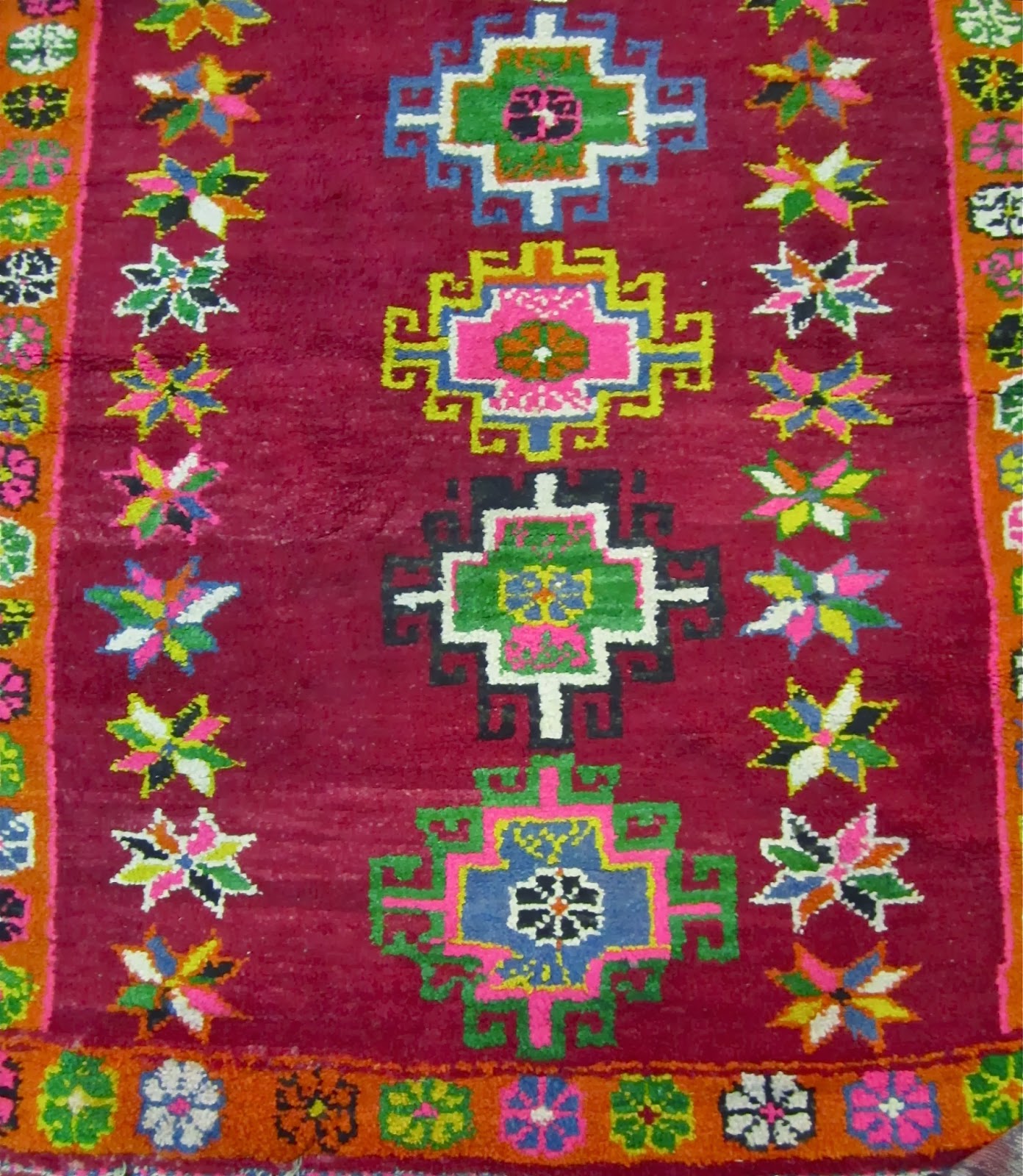 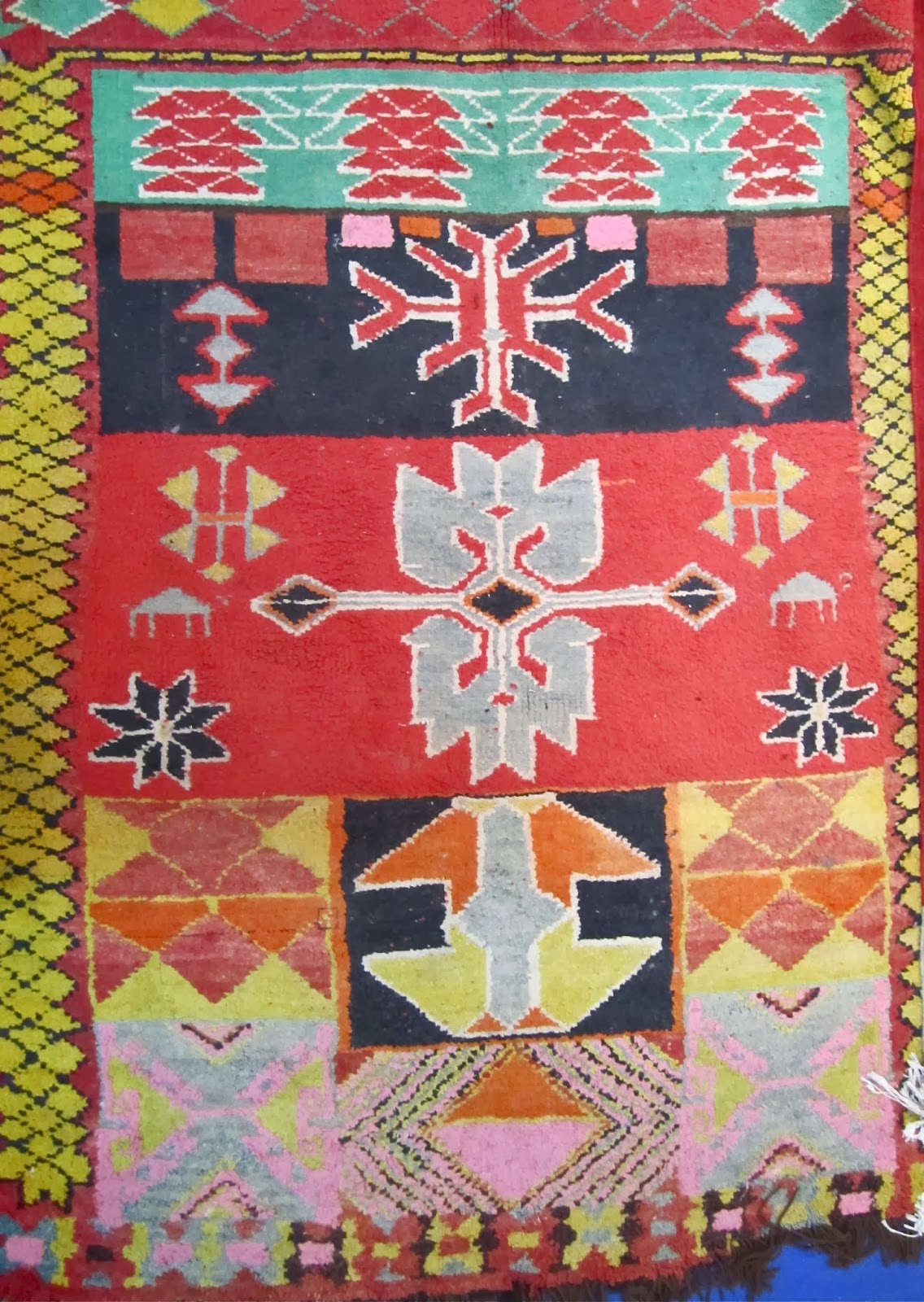 This rug is right off the charts. In my mind, it's so ugly it's cute. 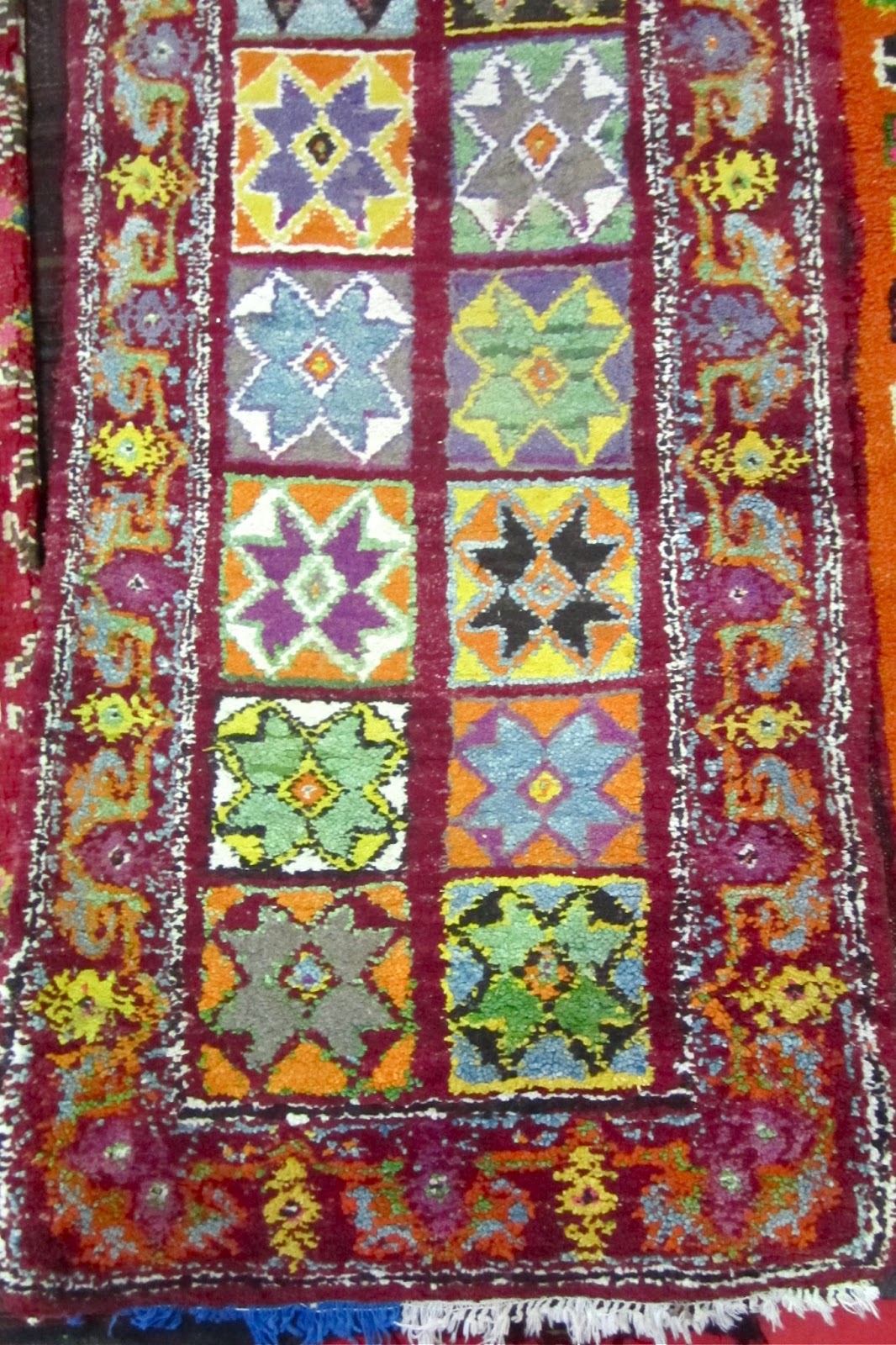 And last, but not least, and my favorite as well: an eight-pointed star design. It must be the stars that please me--so quilt-like. Or is it the wild colors and crazy border?

Drat! I should've taken this one home, too.

When so many gorgeous rugs are displayed at a craft show, they overwhelm the spectator. It is difficult to "see" much of anything. I have enjoyed taking a second and closer look and I hope you have enjoyed the magic of these rugs and carpets as well.
7 comments:
Labels: Tunisia 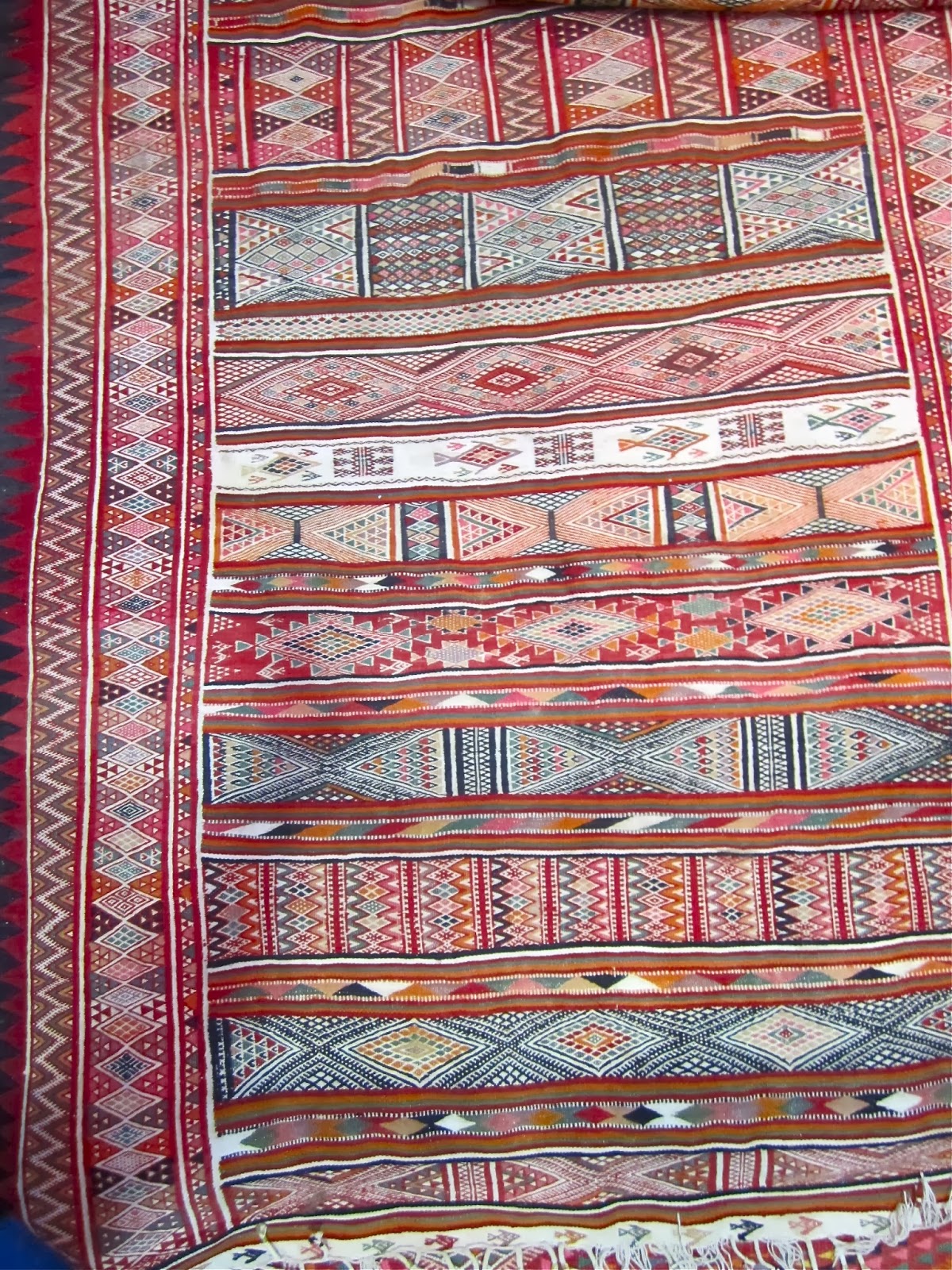 At the craft show, the beautiful old flat-weaves commanded attention.

I suppose these are 30 to 40 years old. Lovely weaving, beautiful combination of colors. 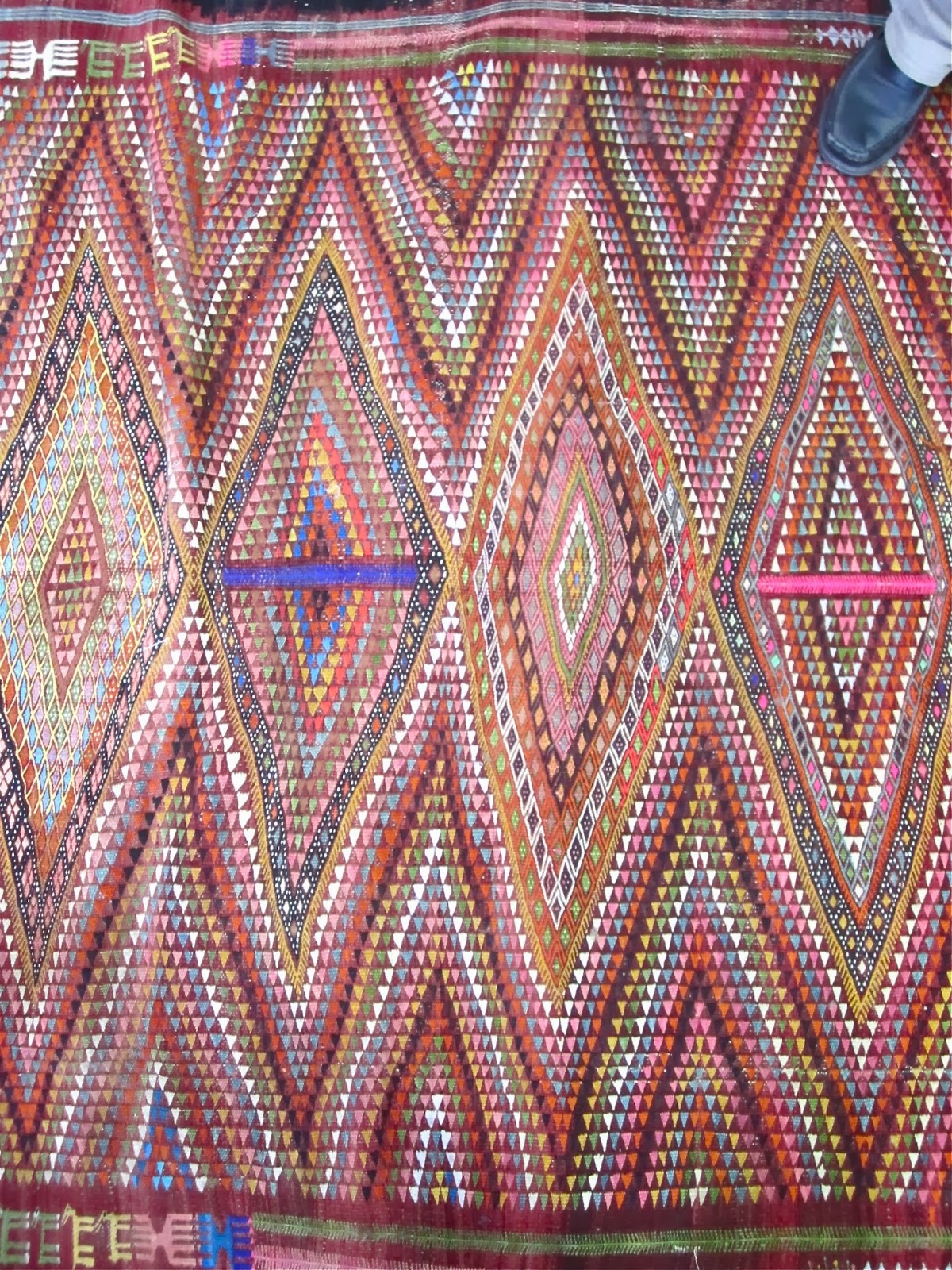 There are occasionally surprising touches, like the pink and purple strips in the middle of the diamonds. 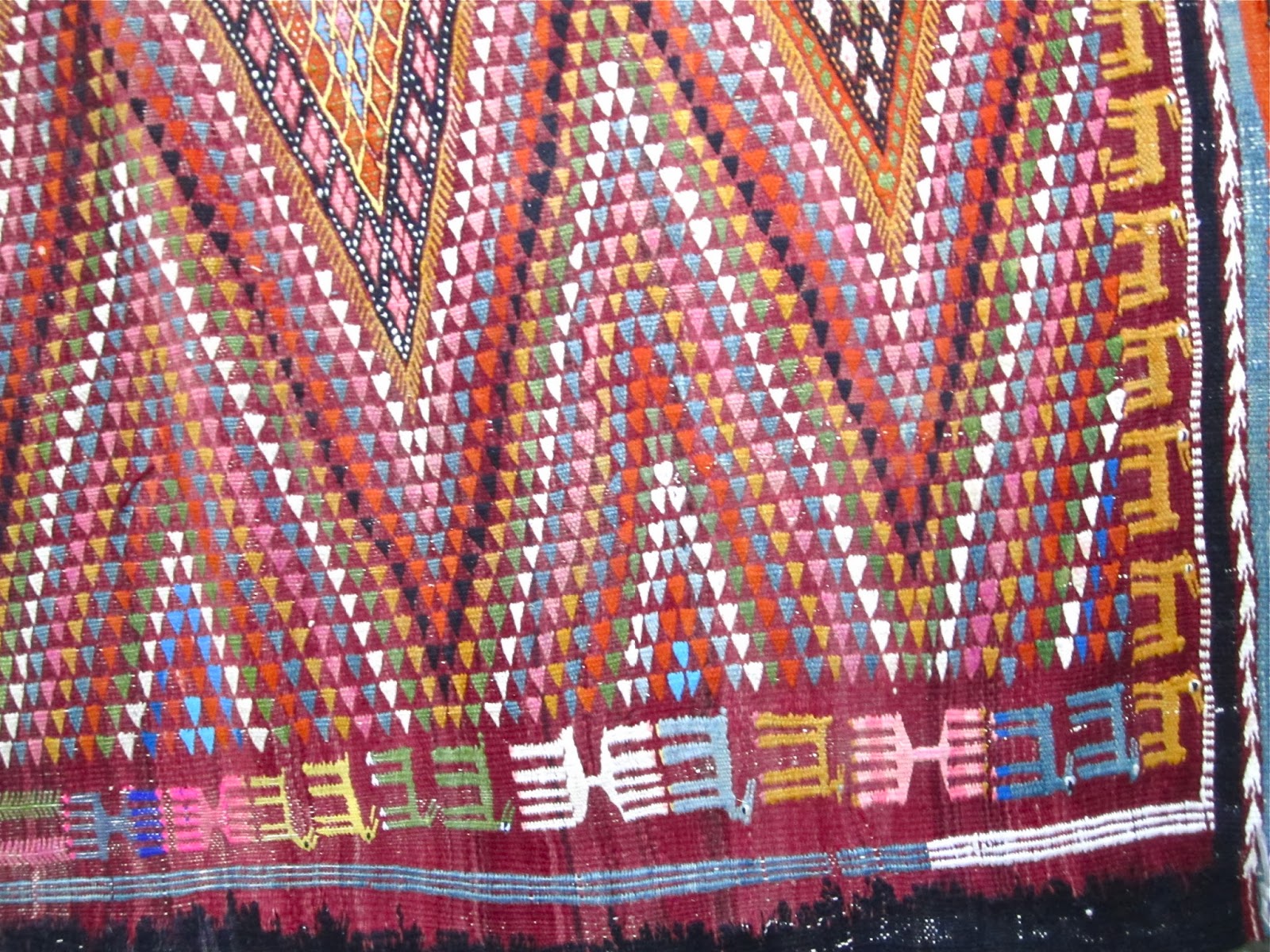 And the borders are of interest; they're a sort of signature. 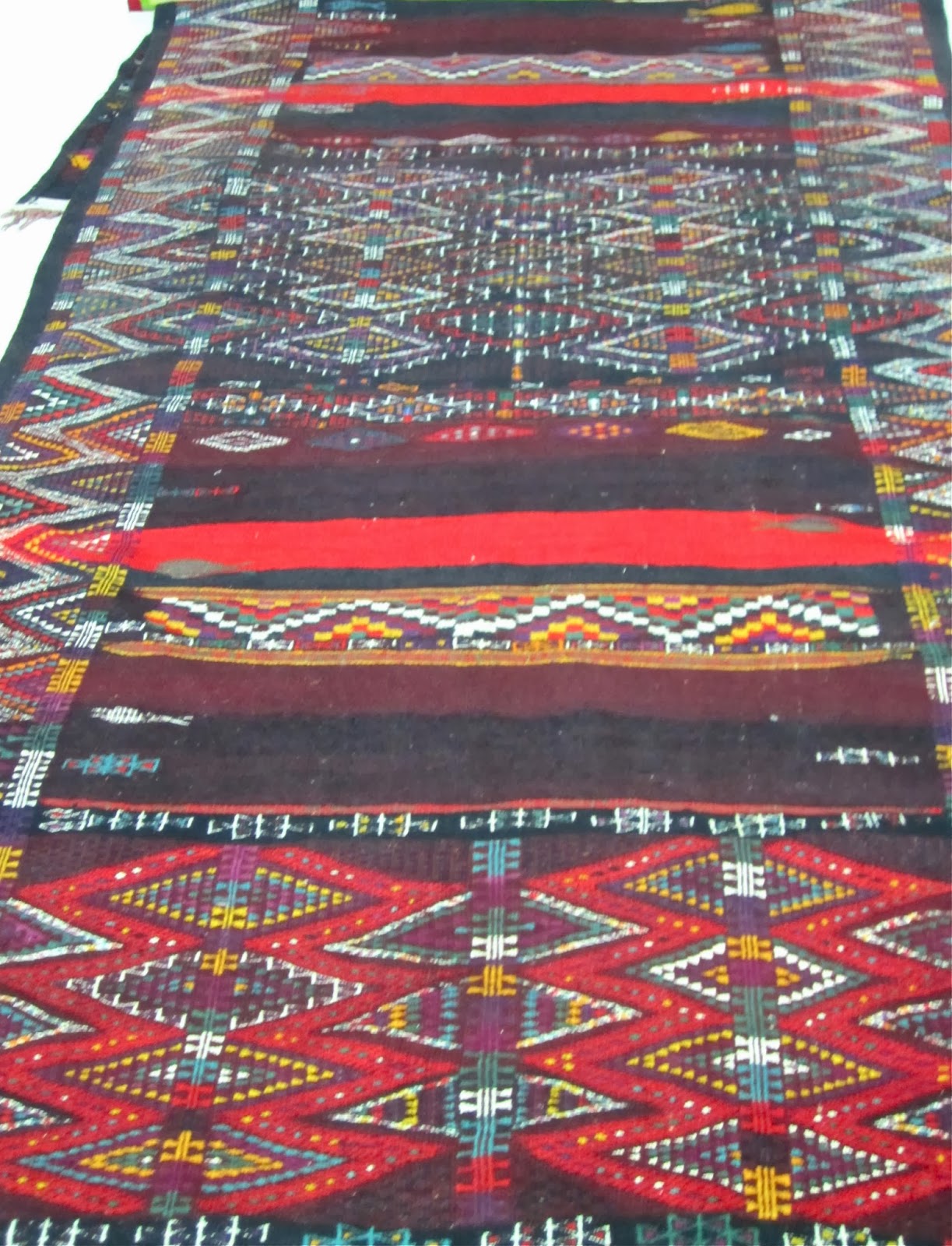 The use of black makes the colors pop out, dramatic. 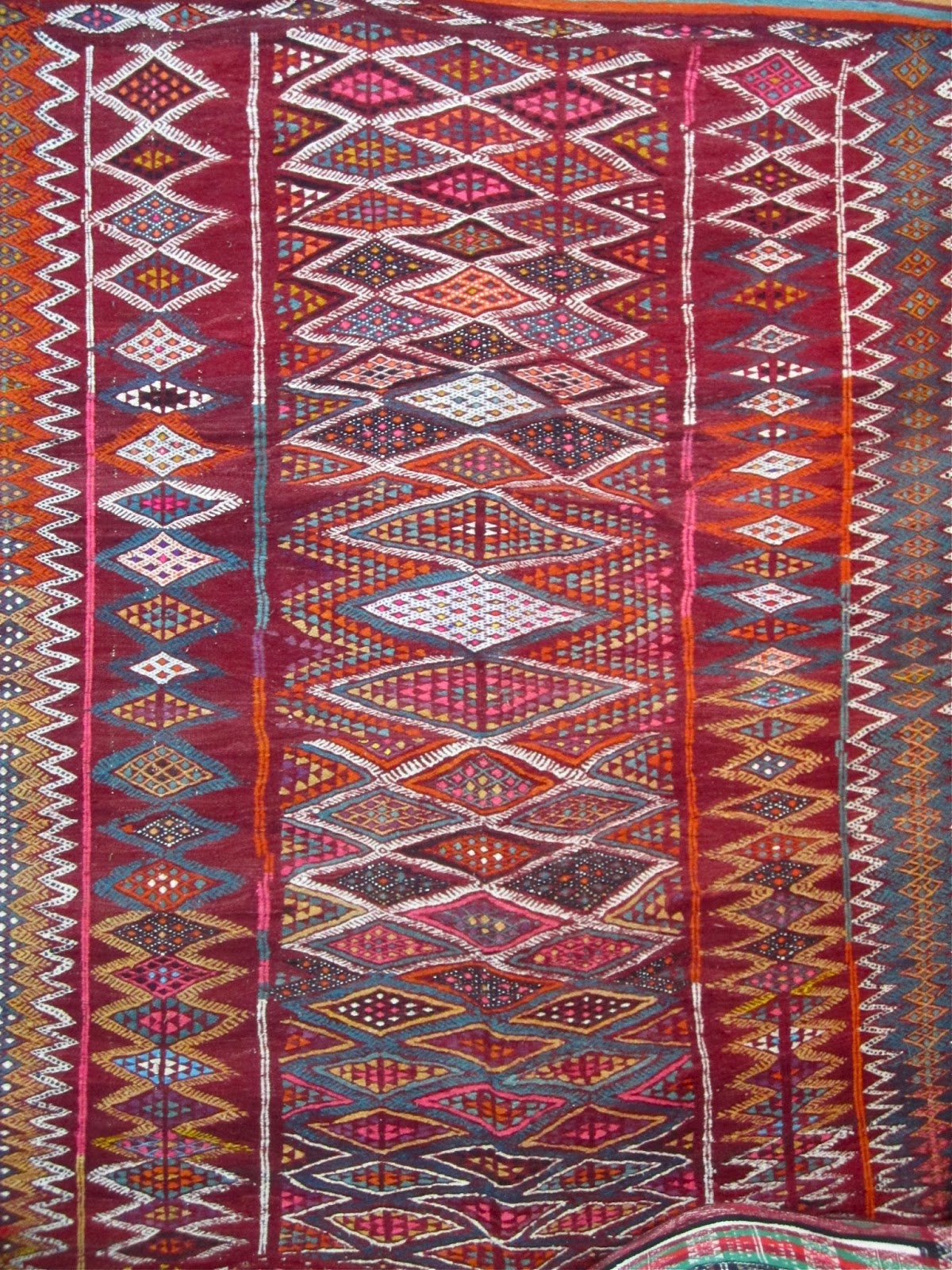 The warm colors (and especially the pinks) with that soft blue-gray make this rug (r.) sing for me.


Ahh, but my favorite, the one that not only sings, but dances for me: 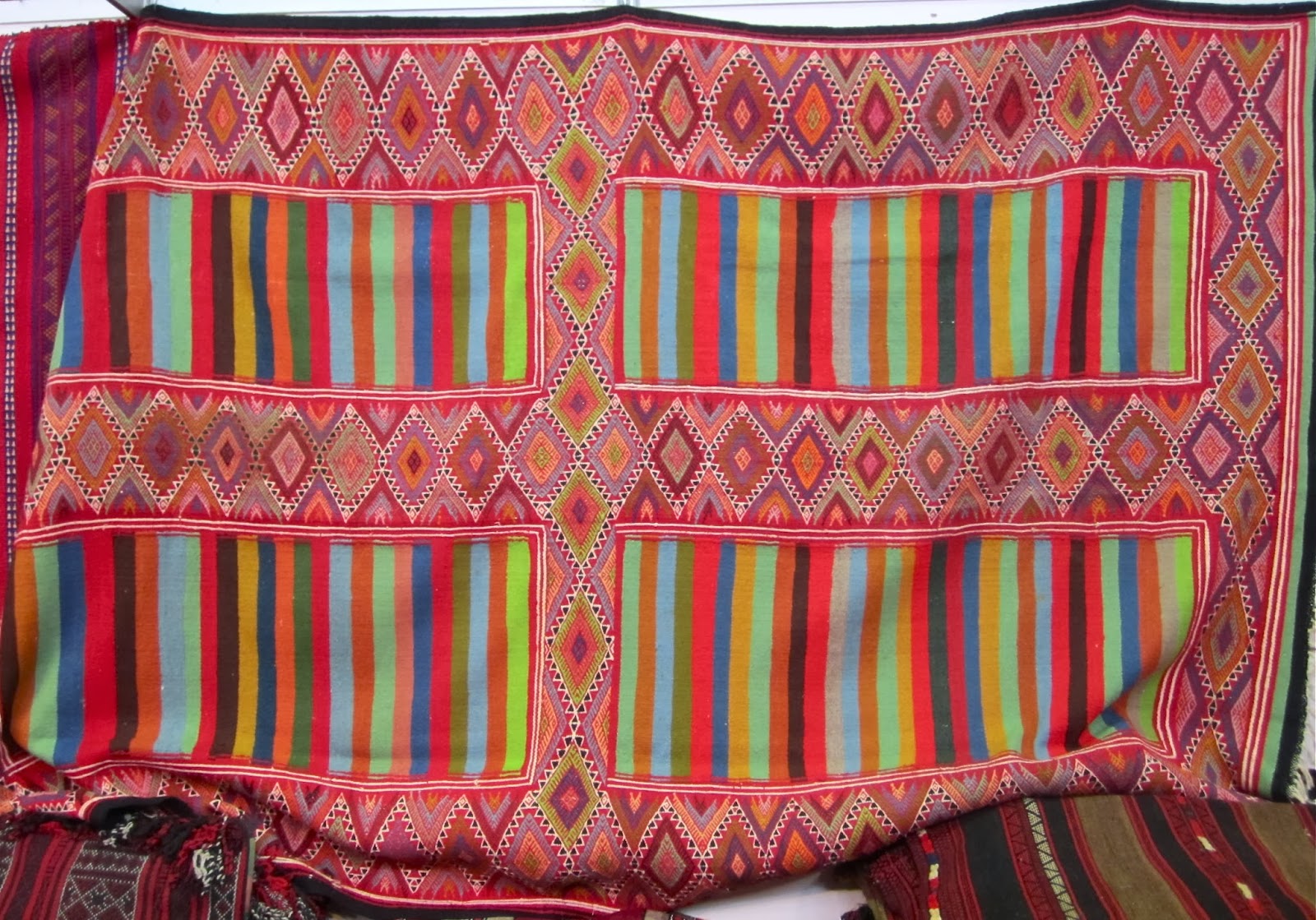 Such craftsmanship and what an amazing combination of colors. I'm usually not a fan of acid green, but here it's perfect. I wouldn't have dared...Drat! Why didn't I take this one home?
11 comments:
Labels: Tunisia

In laymen's terms:
things are holding together, but, are in a tangled mess.

Now you may understand why my artwork is often so entangled. 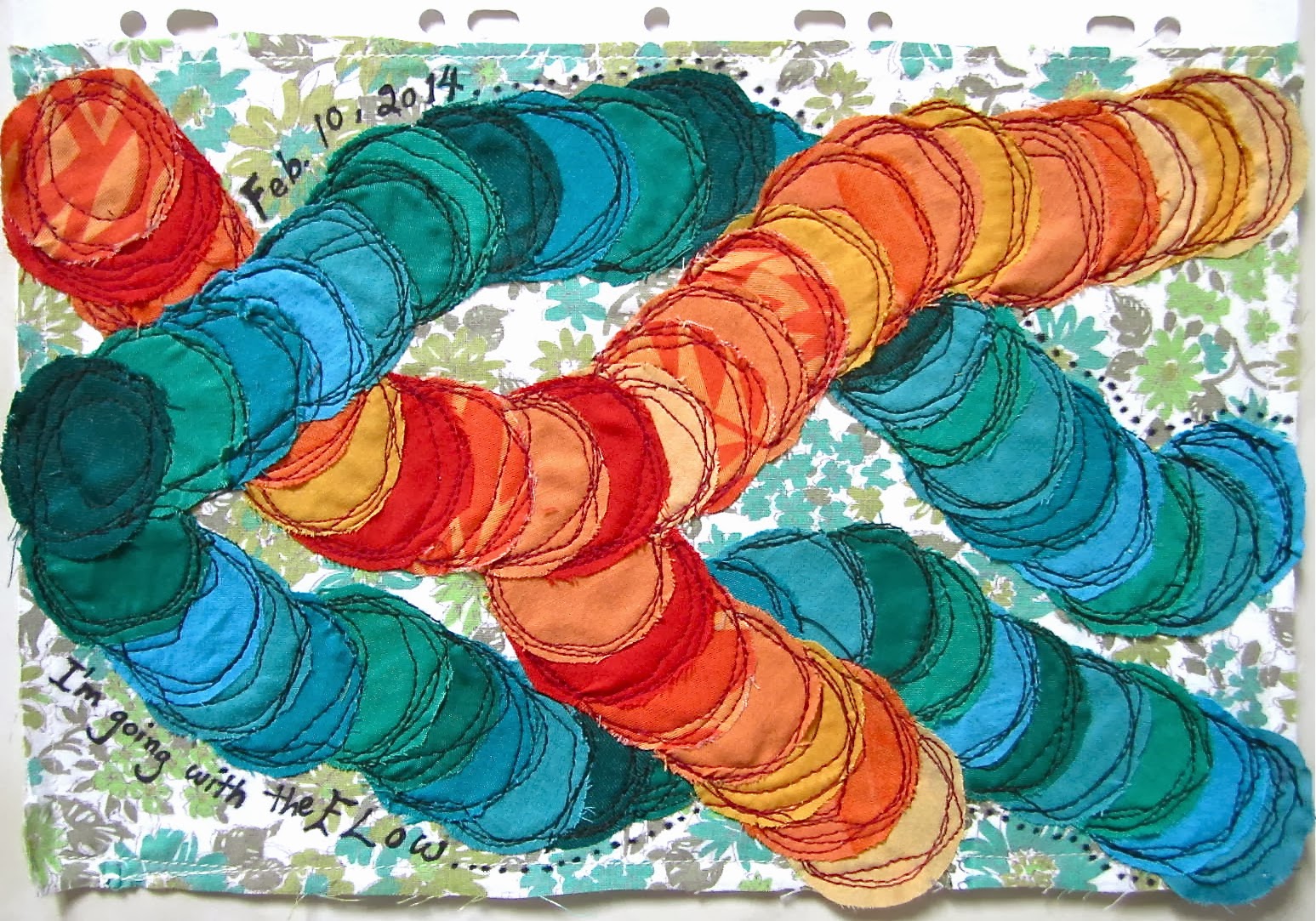 As my sketchbook page indicates, I'm just going with the flow.