Flower Power or Sketchbook as Memory

Remember Flower Power in the late 1960s? My mom had a different take on that. She loved fine china with all its complex and flowery designs, and checked out junk and antique stores regularly in search of teacups in Spode or Lalique or Royal Albert...the list of companies in her mind was lengthy. I suspect her collection grew once all the kids went out into the world, because to amass such an extensive collection on my dad's meager teacher's salary was quite a feat. And she would use them lovingly, when friends would come around, on formal occasions, or just for her afternoon cup of tea. There were flowery, decorative stacks of them in the dining room to brighten the grey, drizzly Oregon winters.

Truth to tell, I raised my eyebrows and never quite understood. Give me a big, sturdy mug so I don't have to worry about breaking anything. 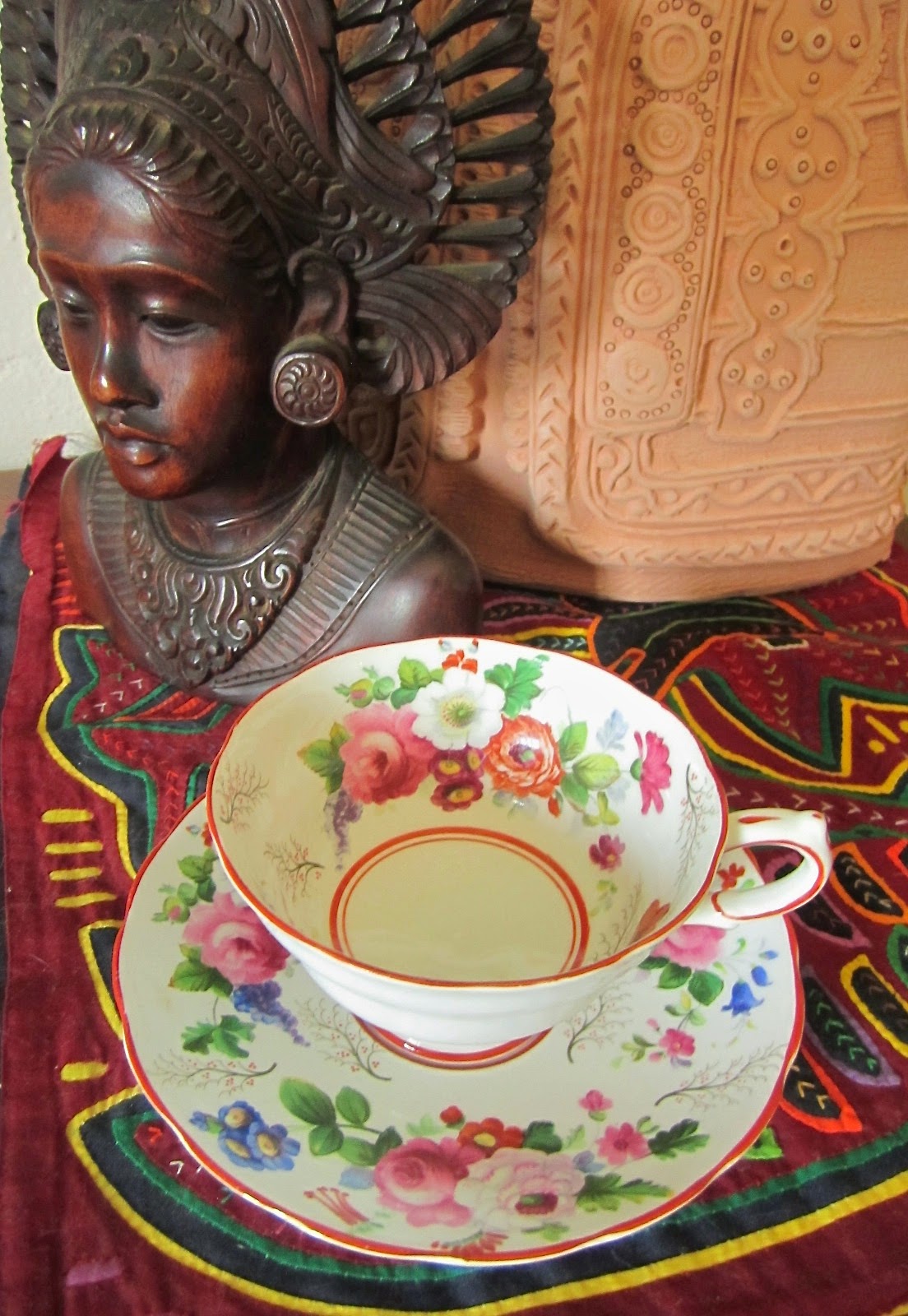 Recently, however, with the online classes at Sketchbook Skool, my thoughts have turned towards the sketchbook or art journal as a work of Memory, as a commentary on one's life to be bequeathed to loved ones eventually, to the younger generation. I tend to use my Textile Sketchbook/Art Journal in that sense, but, paper and paint never tempted me much. That may be changing. One of the assignments concerned teacups and suddenly there was a torrent of outpouring from SBS students remembering mothers and grandmothers. This seems to concern women in particular (what is it about teacups?), but the Memories were there. 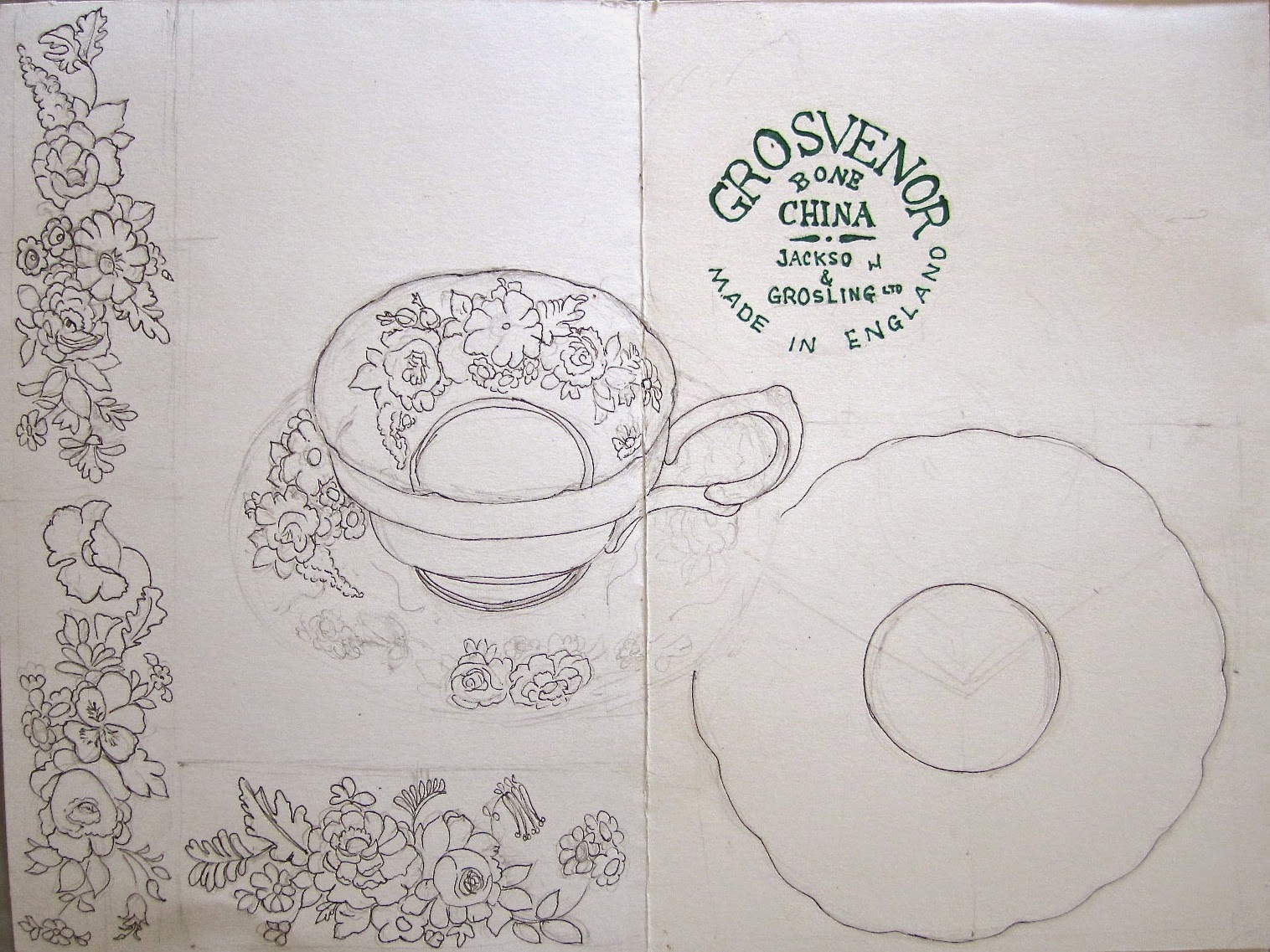 This forced me to think about 18 of my mom's teacups gathering dust in my cupboard. I looked them over and realized they really are beautiful. I chose one and started a layout over two pages.
Because of the complexity of this design, I got distracted by another cup in blues that seemed just a bit simpler in design. (Hmmph! It still took me 3 weeks to finish.) 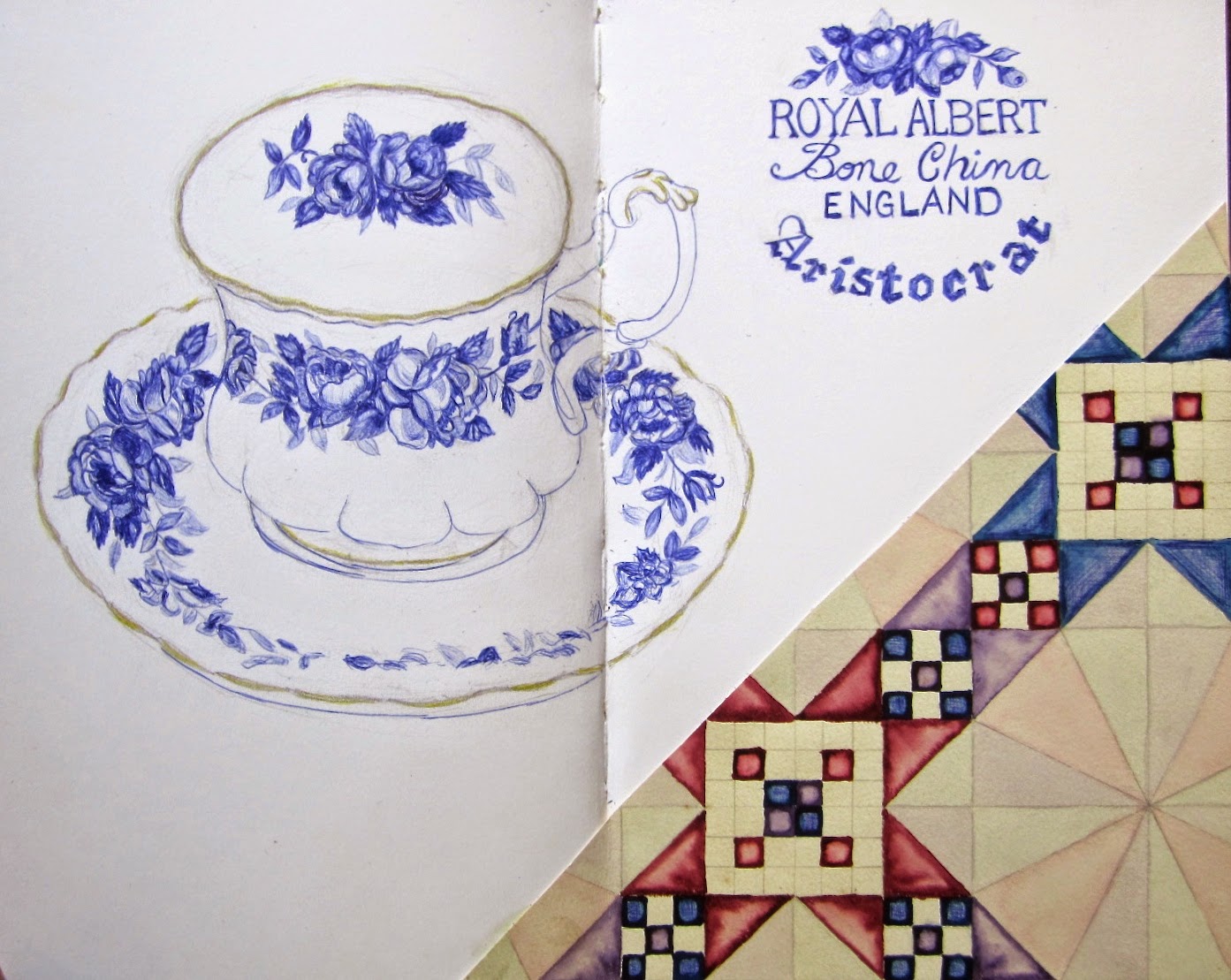 I glued a recycled watercolor painting to the corner. I like the yellowed paper and the hard lines of the geometric patchwork design that contrast to the swirly florals. Done with a Bic Crystal ballpoint pen, I had fairly good control over the floral design. Then the moment of truth came when I added the watercolor shadows. After spending so much time on the finicky flowers, I nearly had two heart attacks when I ruined it all twice...however, if I've learned one thing at Sketchbook School, it's to keep going. And so, it all worked out in the end. And I thought often of my mom--OK, Mom, got it, teacups are useful (to paint). A series may be developing here.

Now, I find it comforting to think that maybe one day my granddaughters will sit and sip tea from their great-grandmother's teacups while looking at their grandmother's sketchbooks. They will remember... Memories of Flower Power...
17 comments:
Labels: grandmothers, sketchbook 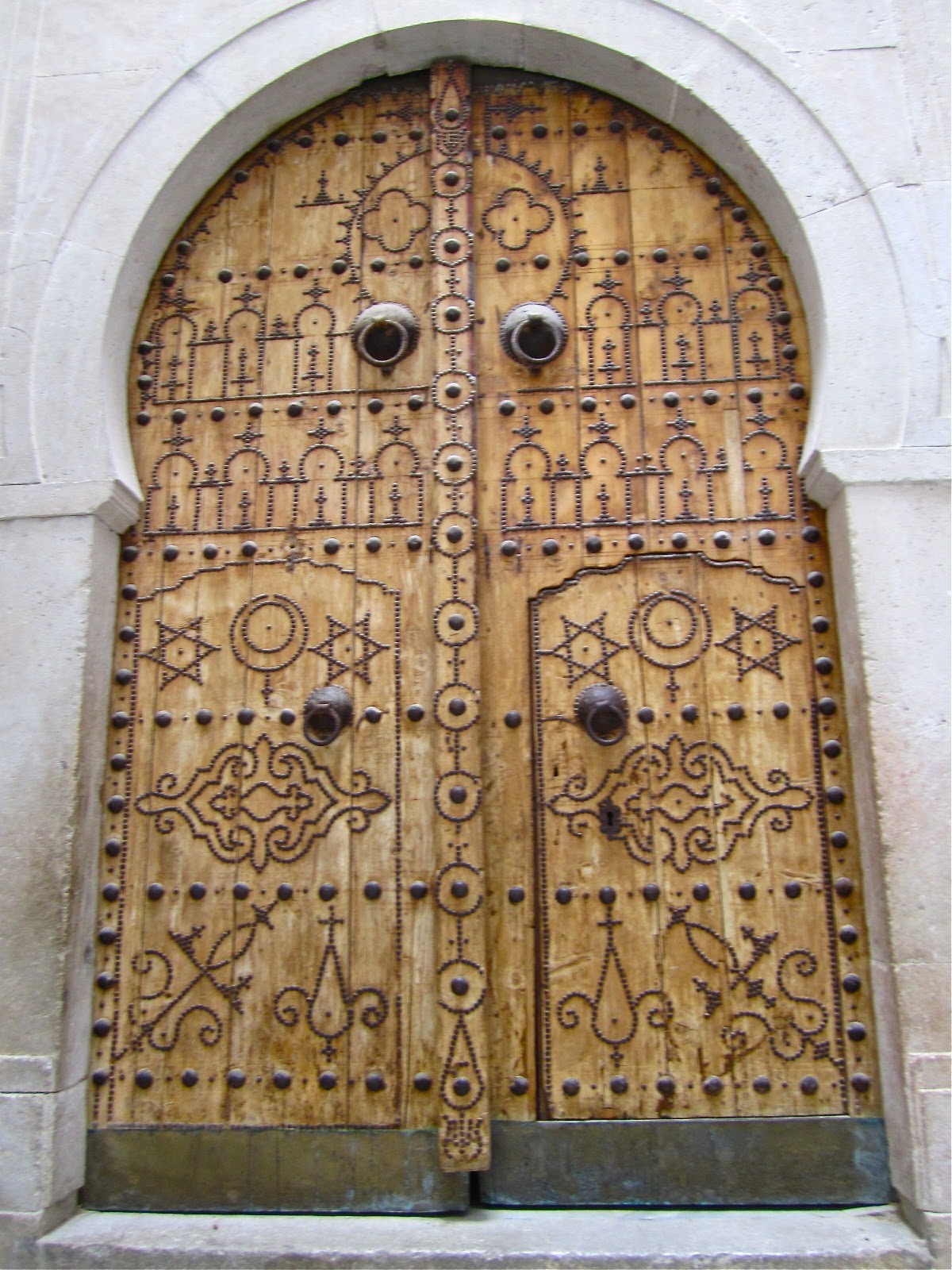 As the Bardo Museum in Tunis contains one of the most spectacular collections of Roman mosaics in the world, the Camp director decided to take campers to visit and sketch. However, the palace itself is worth the visit.

The Bey (King) of Tunis resided in the Bardo Palace, which was constructed in the 19th century, until it became an antiquities museum in 1885.

The museum has been renovated and extended, however, one can see the former splendour of the palace.  Leading up to the front door, a series of lions stand watch. The National Assembly now meets in that section of the palace. 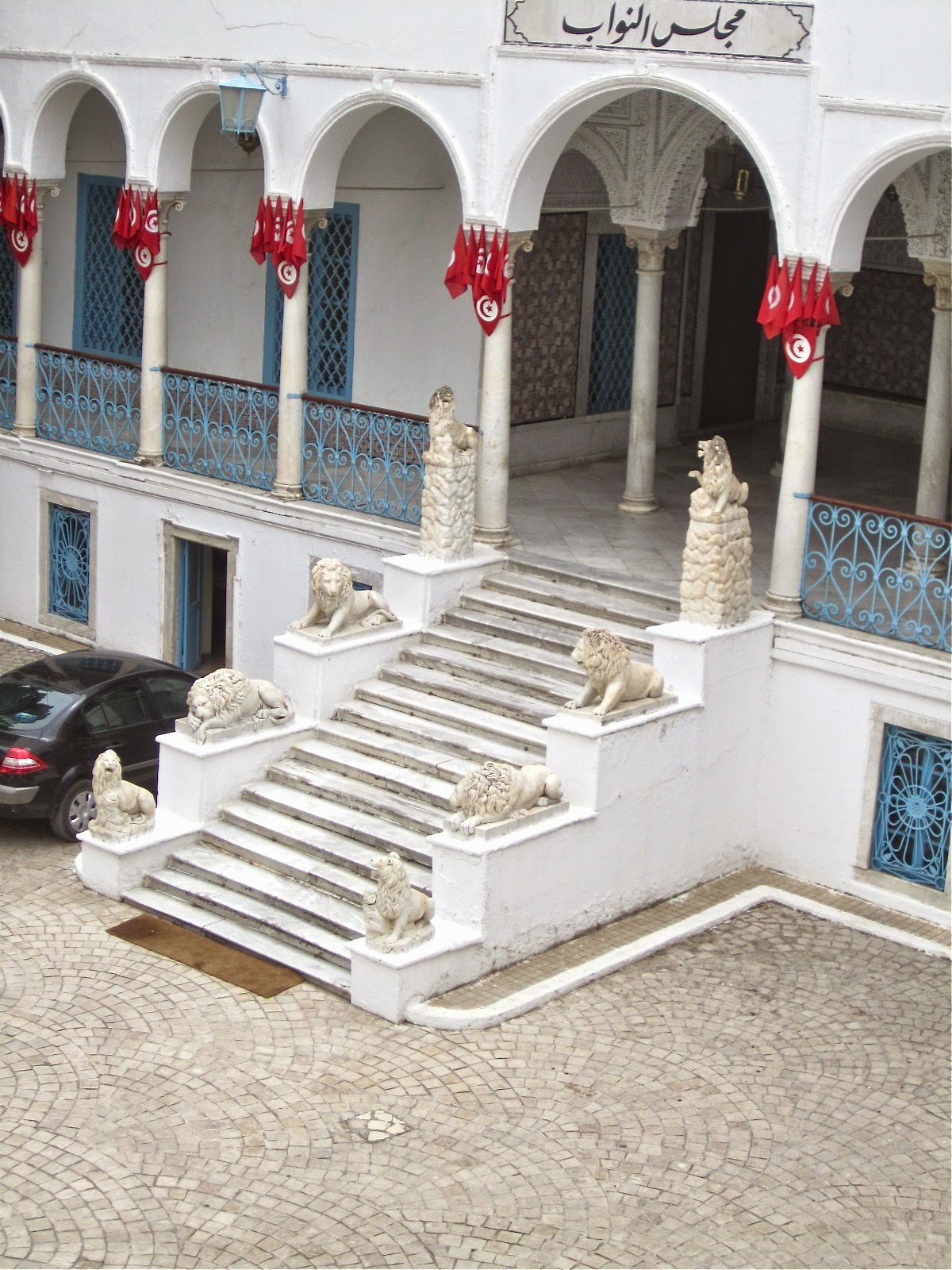 Some exquisite ceilings can be seen. 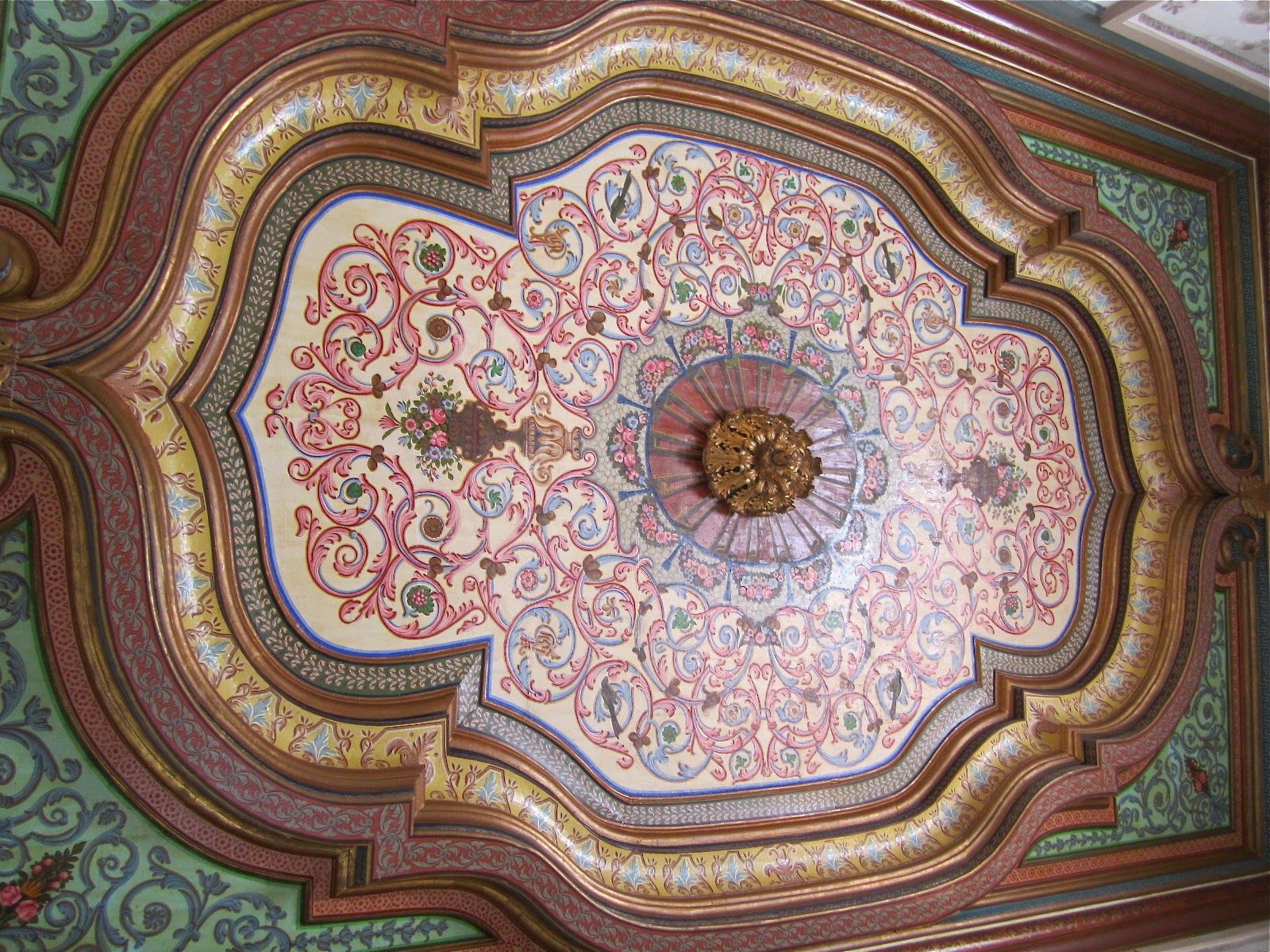 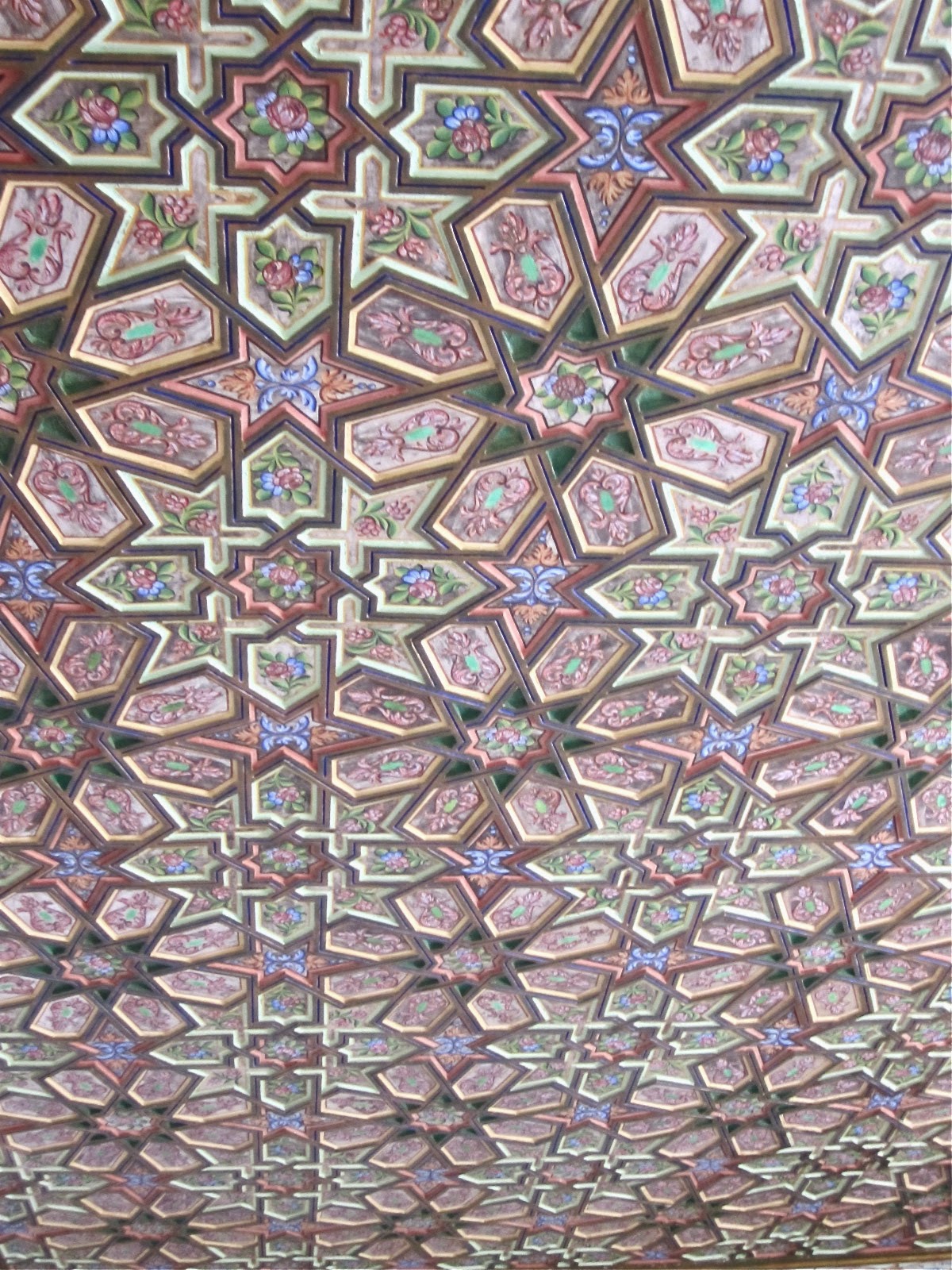 I could live under this ceiling.
Breath-taking... 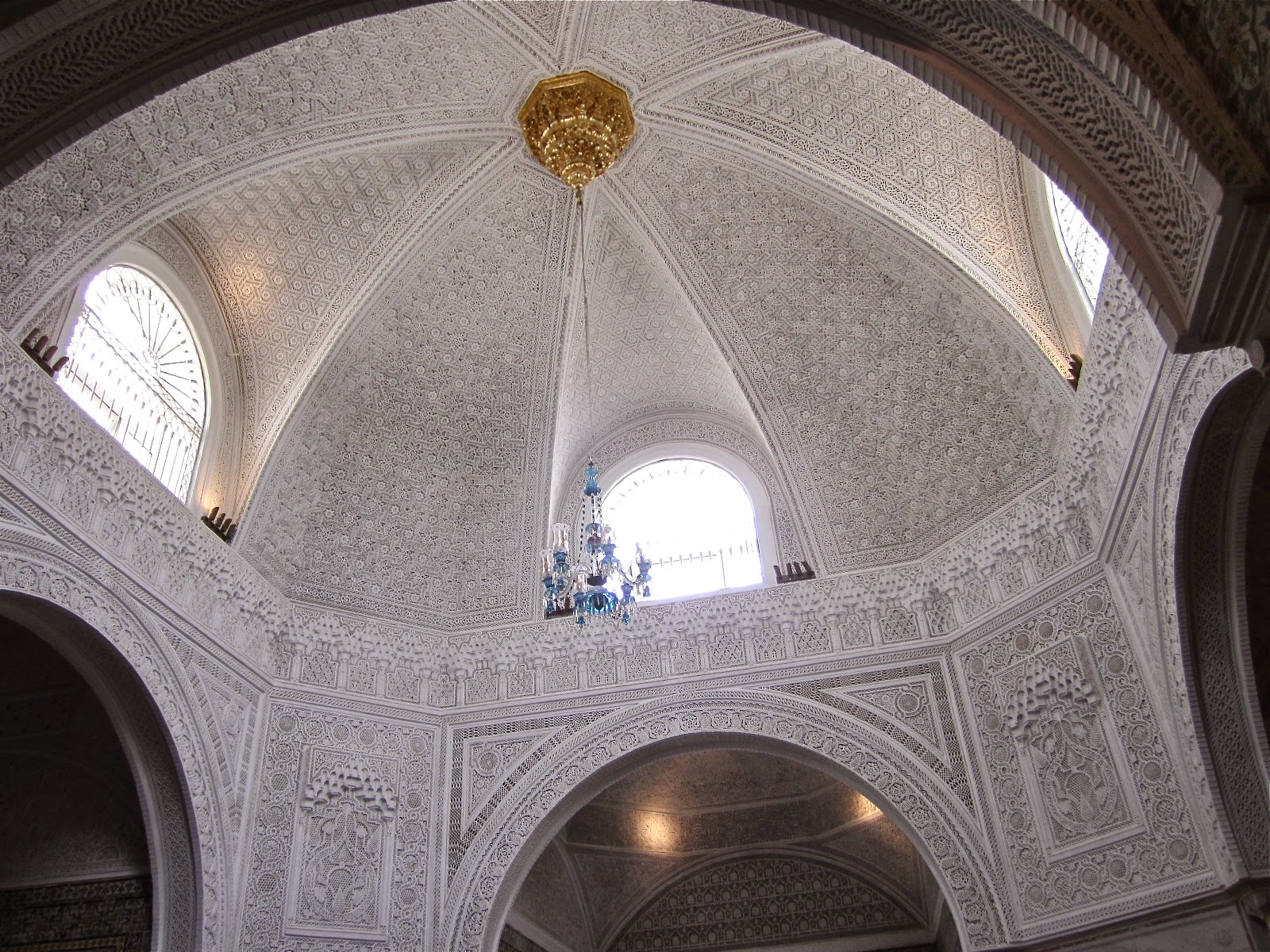 Maybe the most spectacular and certainly over-the-top: an ornate mezzanine floor. 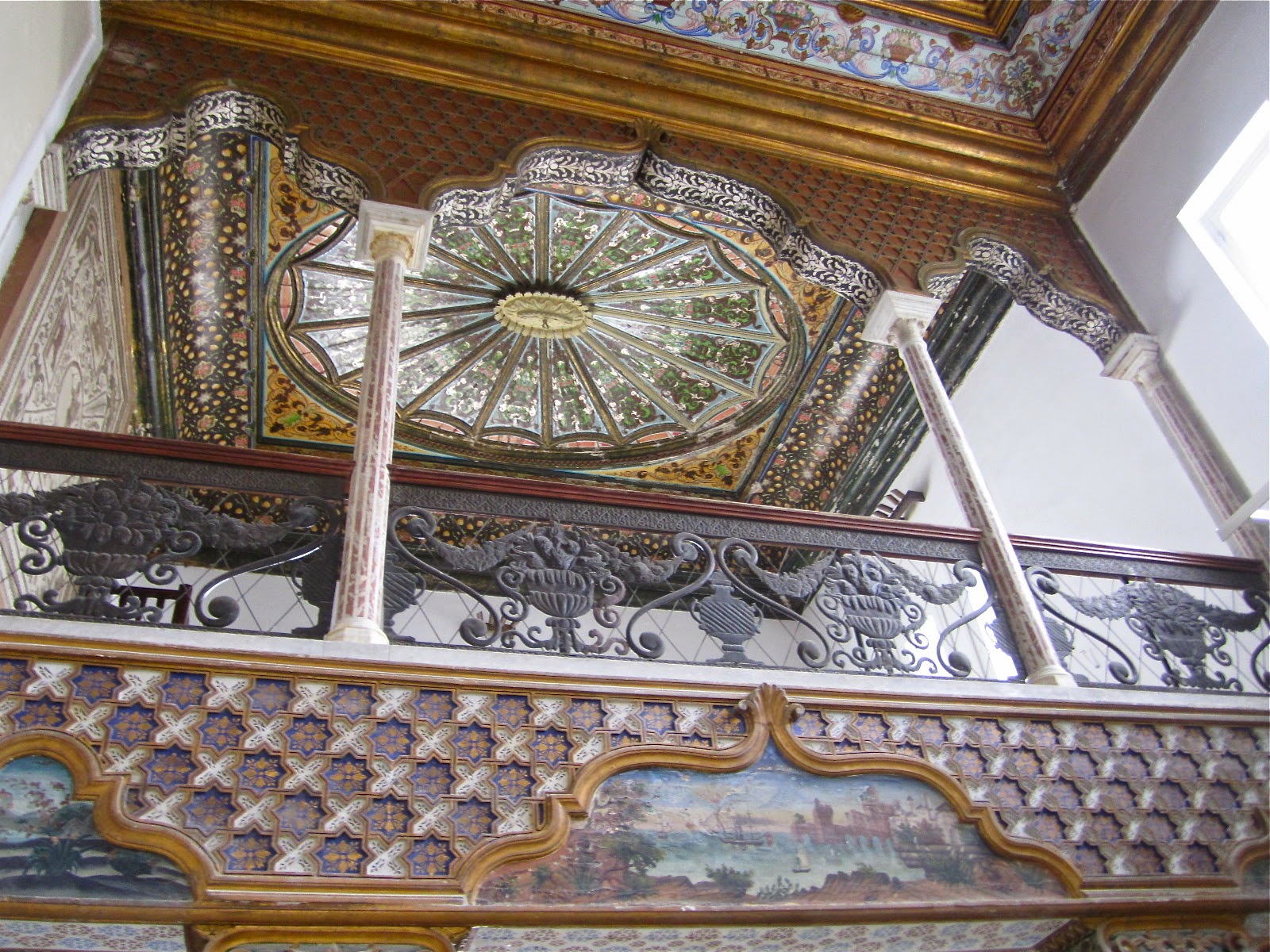 It's hard to know what to admire first, the woodwork, the painted ceilings, the metalwork, or the gorgeous marble of the columns.
And of course, lovely tile work graces many walls. 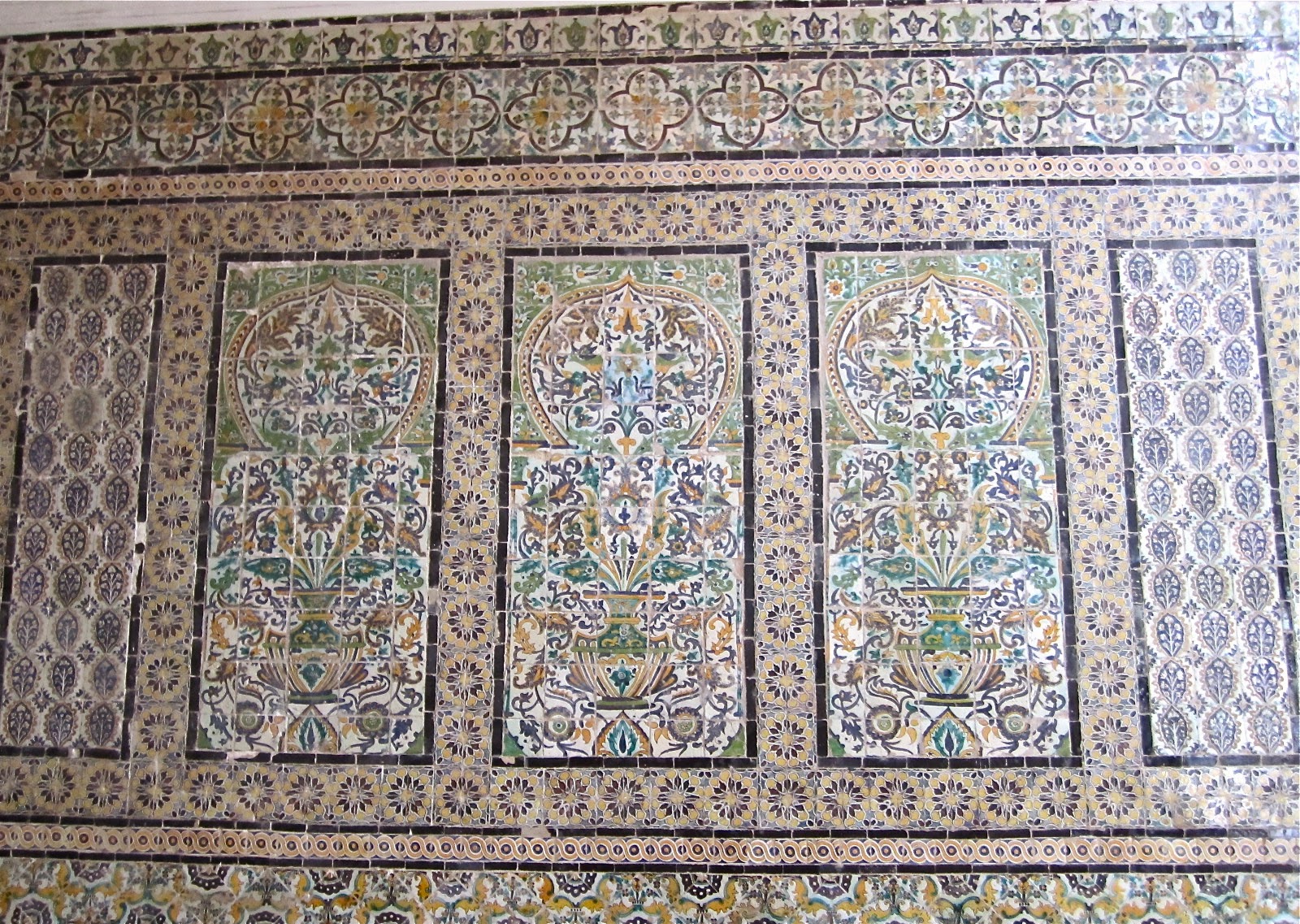 Memories of Istanbul, for the beys were of Ottoman descent and kept ties to the center of the Empire. One can't help but admire the sophisticated use of pattern and color.

I'll have to go back when the weather gets cooler.

After the Little People left, I vowed to do some Spring Cleaning early, you know, some deep cleaning, organizing and junking stuff that will never be used, especially in my workroom, which is really my playroom, but don't tell my family (I keep the ironing board set up and ready to go to keep up appearances). In the corner, a framed pen & watercolor painting from the 1990s leaned against the wall, out of use and forgotten. 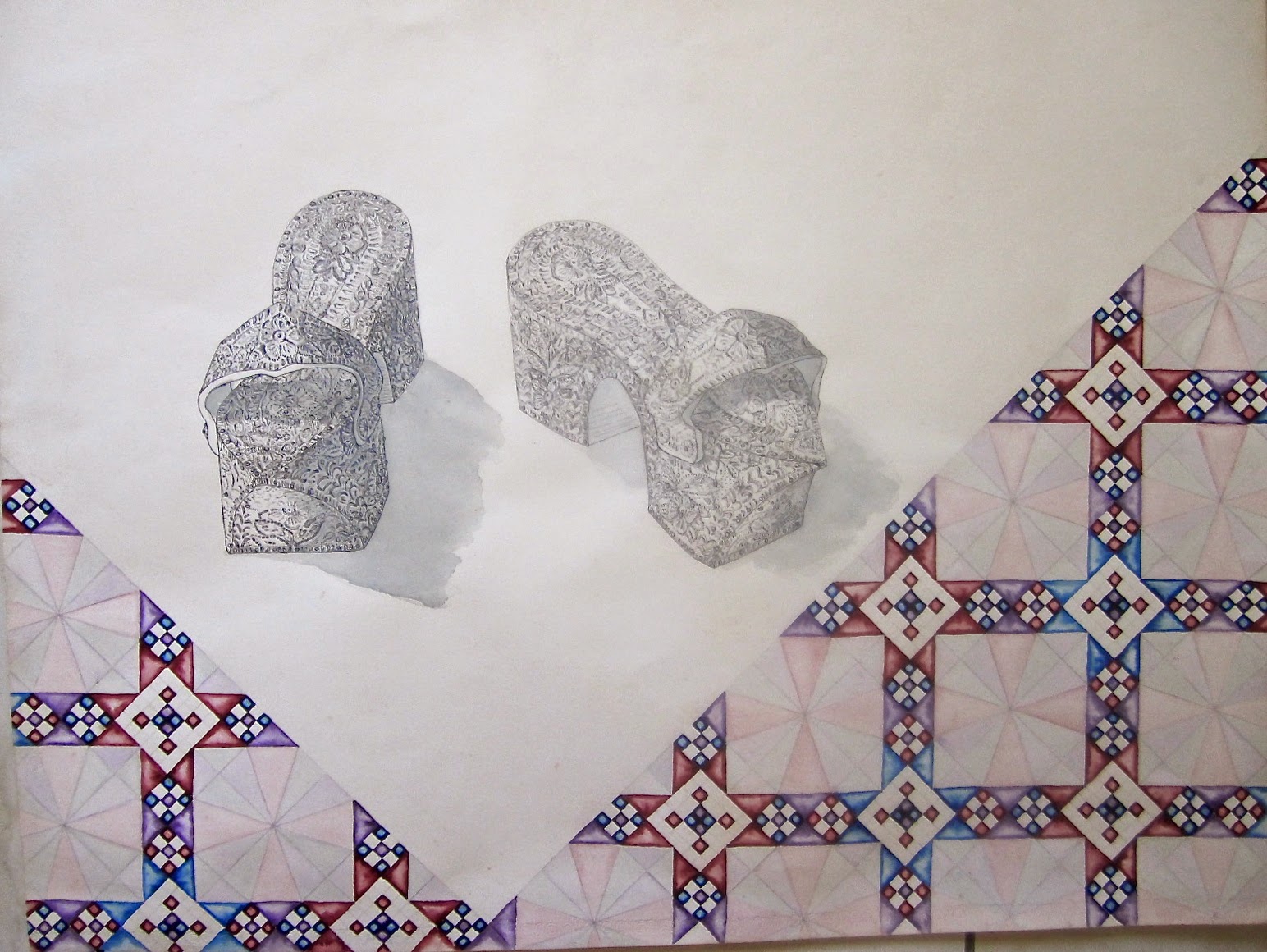 It was just at this moment that the cat decided to have an accident (he tried to tell me he was desperate) on the frame of the painting...which in turn required a thorough cleaning of the whole corner. I took the picture out of the frame, washed the frame and put it in the garage for future use. The painting was yellowed so I tried to put it in a drawer, however, it was too big. I'd have to roll it up.

Then I looked it at, I mean I looked at it. I remembered...I remembered the lovely Tunisian wedding shoes with the tapped design in silver foil, nailed onto a wooden clog. They dated from 1940 and belonged to my Tunisian mother-in-law. The craftsmanship was outstanding, but one shoe was obviously made by an apprentice and the other by the master, seen in the clarity of the detail work.

Then I remembered the hours spent gripping a Rotring pen (maybe a 0.2 or smaller). It probably took me more time to draw them than it took to make them. I framed it up with a patchwork design. 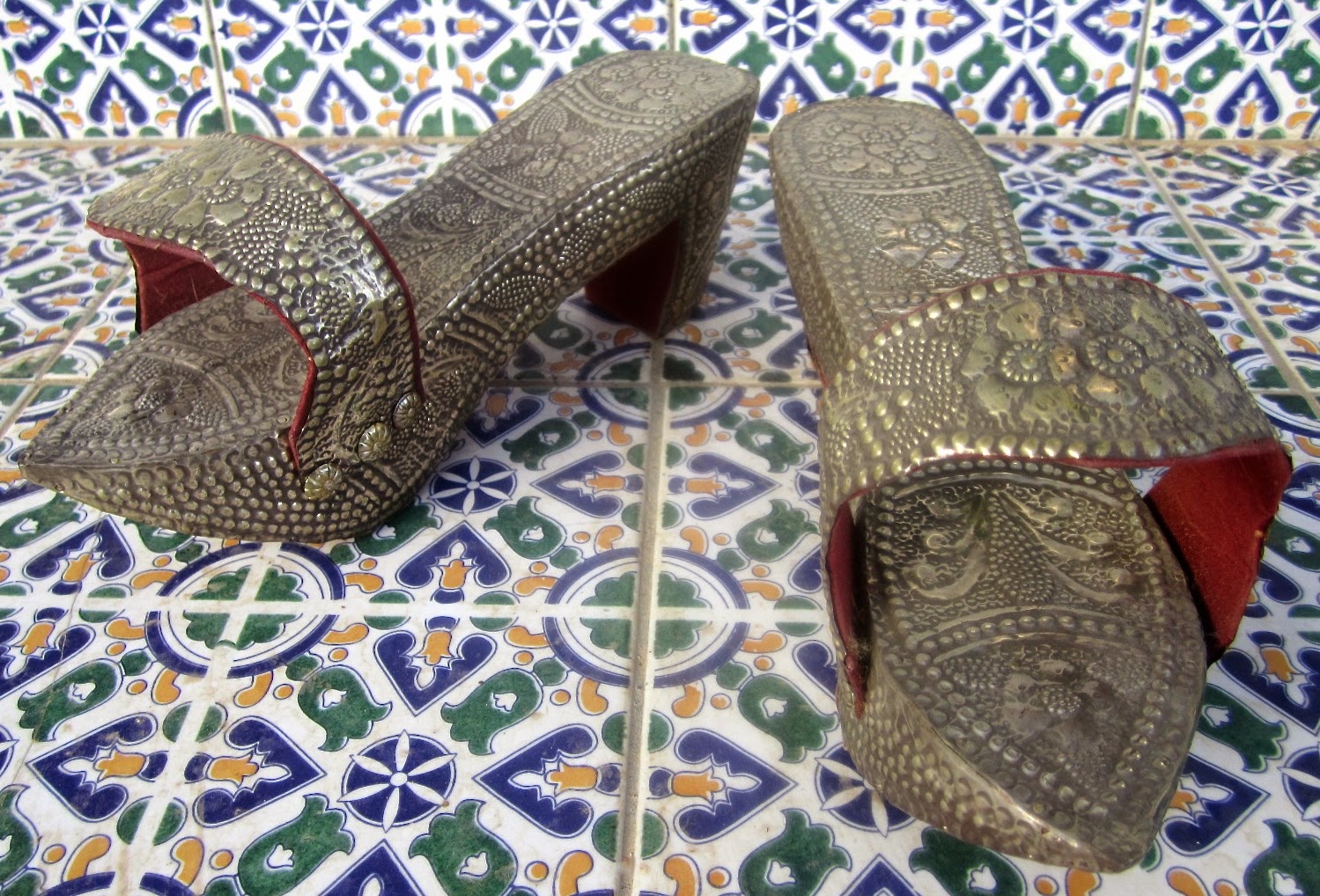 These clogs are not particularly comfortable, but the modern ones are worse. My daughter's wedding shoes are too narrow, less attention is paid to the craftsmanship, and the designs have been simplified. Yet, they're pretty to look at.

Lately, I have been reflecting on the sketchbook as a "travail de mémoire", Memory, which is linked to recycling as well. I took my "fancy" sketchbook (Stillman & Birn with heavy paper), painted a background with watercolors, then cut out and glued on one of the shoes. 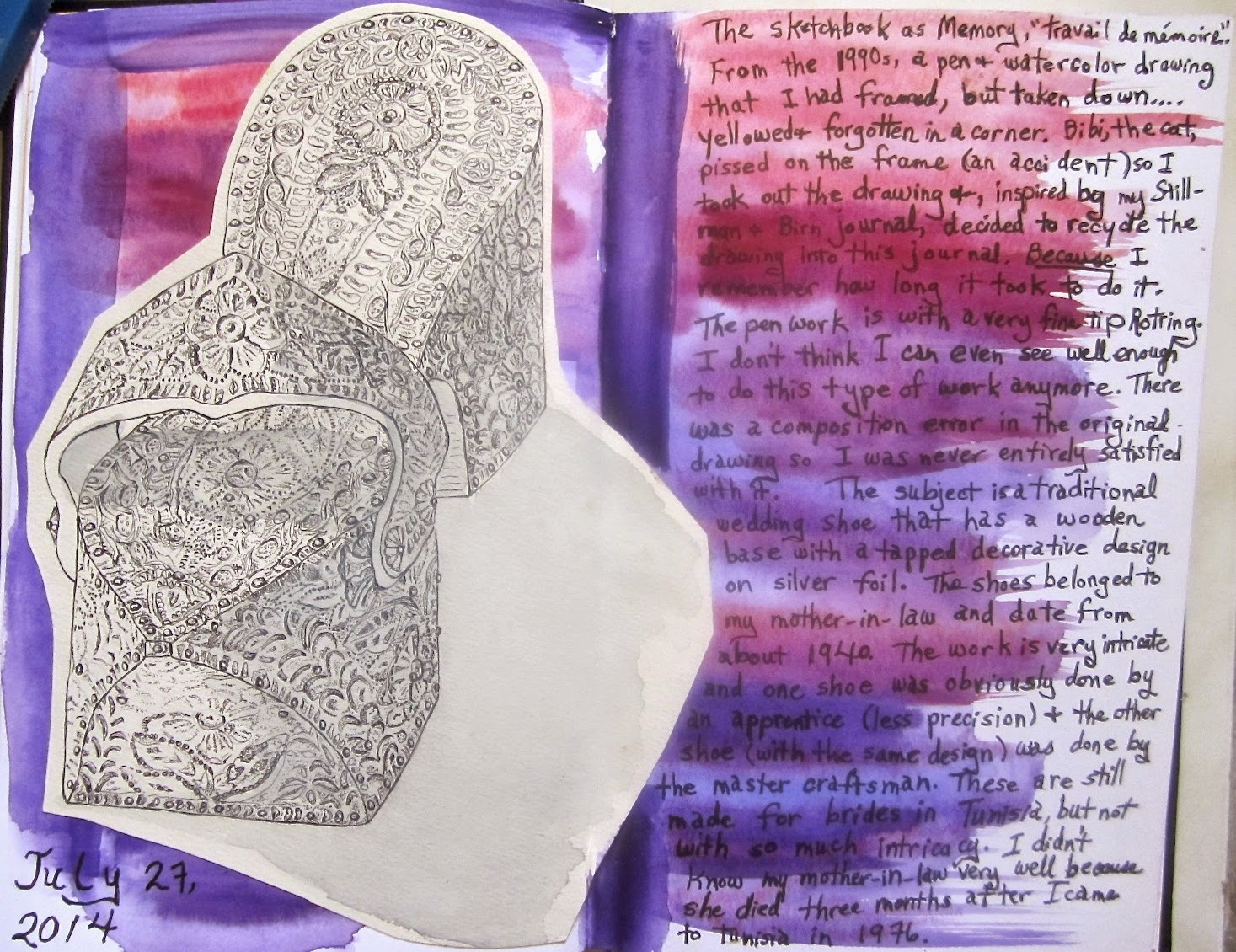 Of course, I had to tell the story of the shoes and the painting. Maybe one day a family member will read it. Memory, memory... 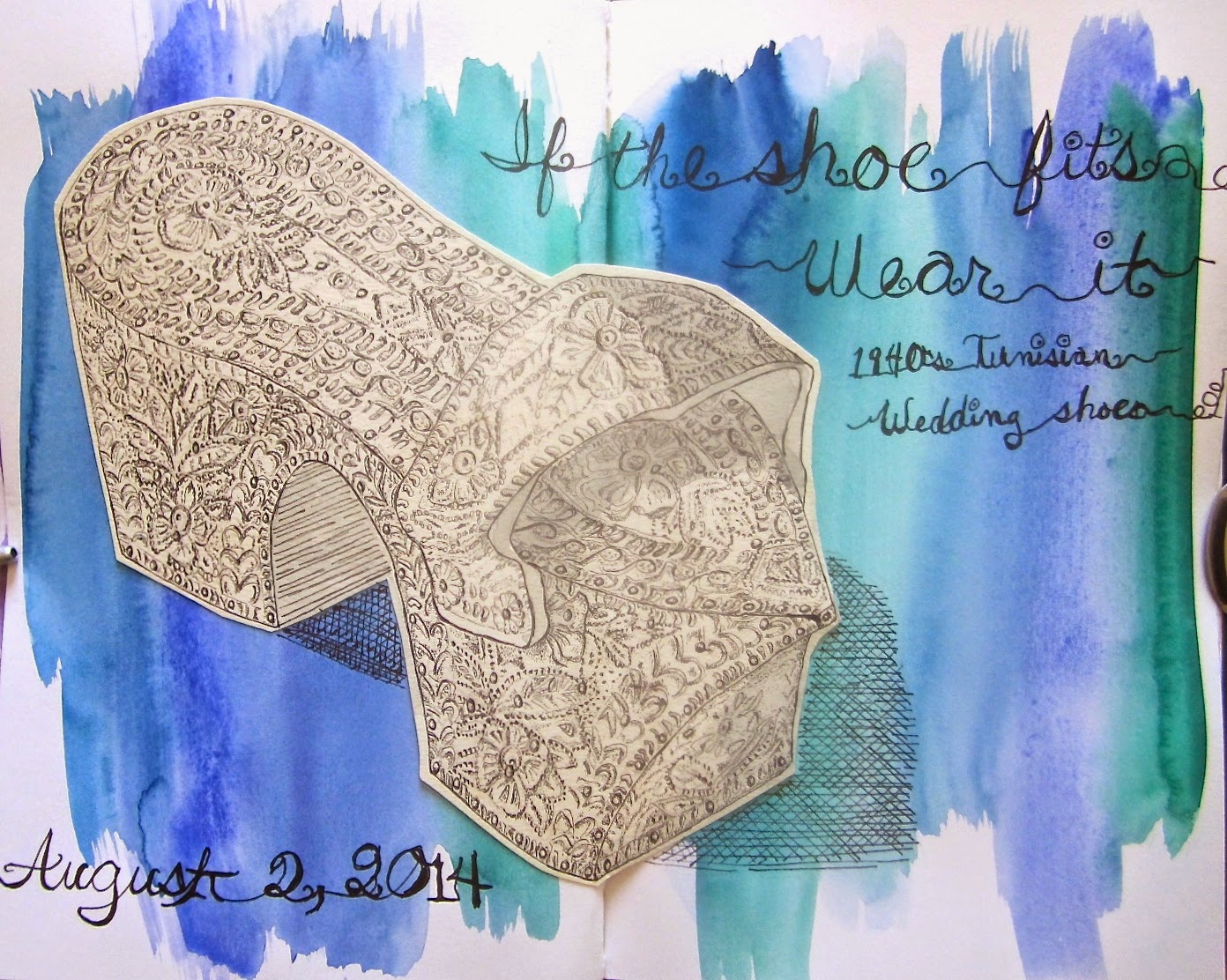 The patchwork sections frame a watercolor of figs. I like the contrast of the yellowed paper and the stark white of the journal. 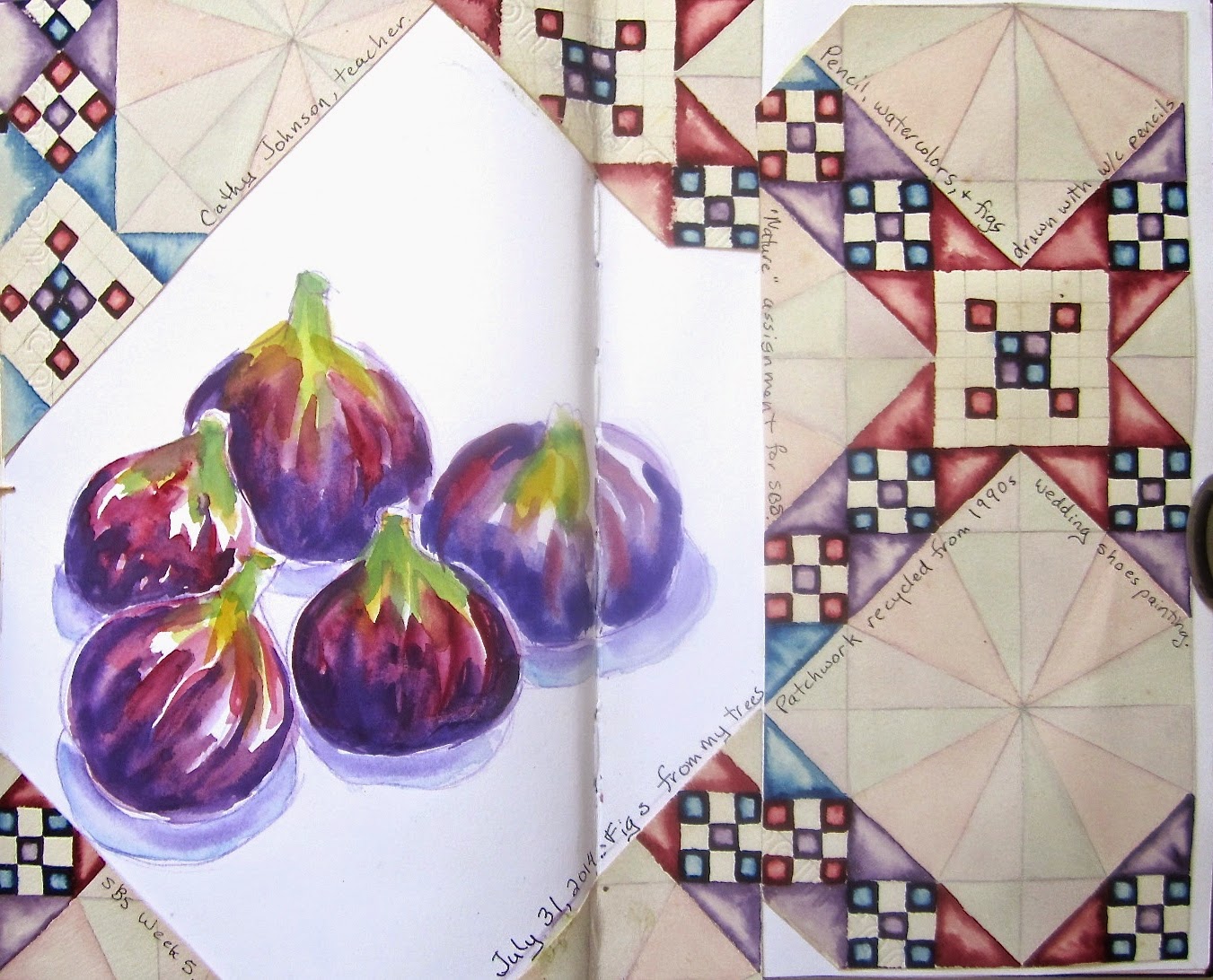 That old painting has taken on a new life and I like to look at that "fancy" sketchbook often. Now the shoe fits much better...
11 comments:
Labels: sketchbook, Tunisia
Newer Posts Older Posts Home
Subscribe to: Posts (Atom)