The winter garden persists with cloudy, gray weather. To brighten things up, the coral bells (Mother-of-Millions succulent) have been flowering since mid-December. 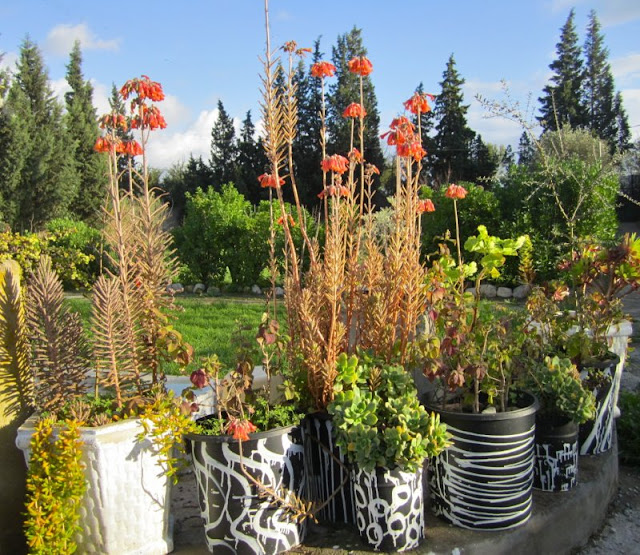 How could one ignore such abundance and beauty? Time to sketch. After lightly drawing my subject in pencil on a man's shirt sleeve (recycled shirt in my stash--I did not whip it off my husband's arm), I laid down some fabrics with approximate colors and machine sewed it all down with newsprint as a stabilizer. 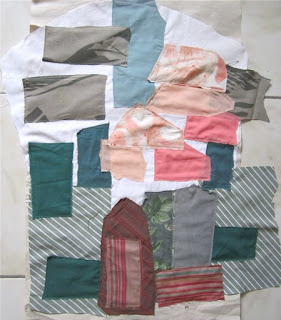 Then I sketched with a permanent black marker, 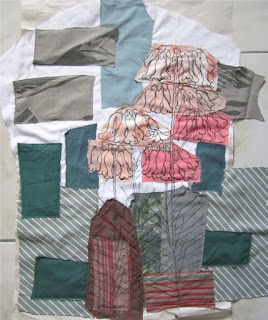 however, I just didn't have the colors I wanted.
Ah, but I have some lovely, shining colors in thread. So I added stitching, 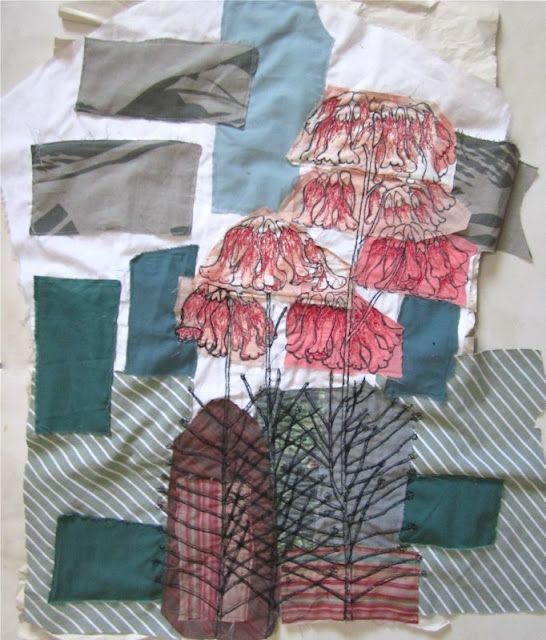 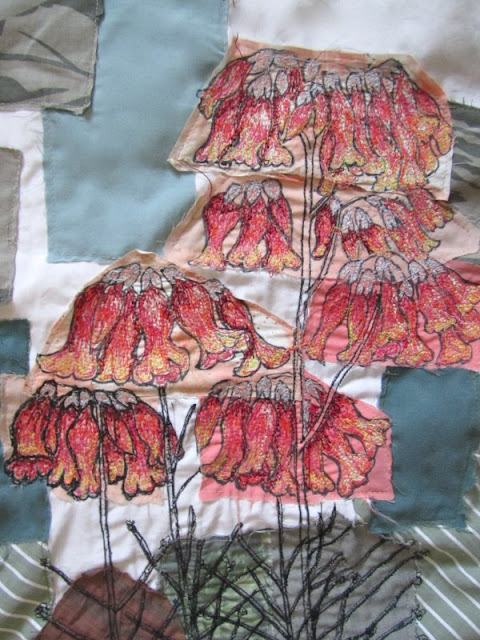 and then the black thread to get back to the idea of contour drawing. 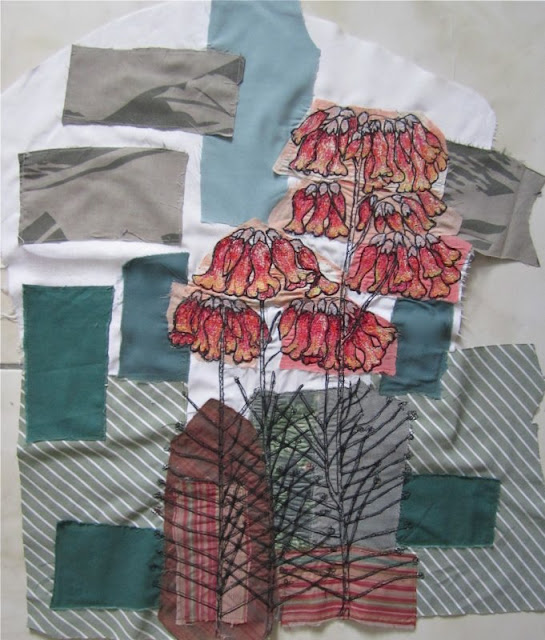 A work in progress, this piece will see more hand stitching in the background. 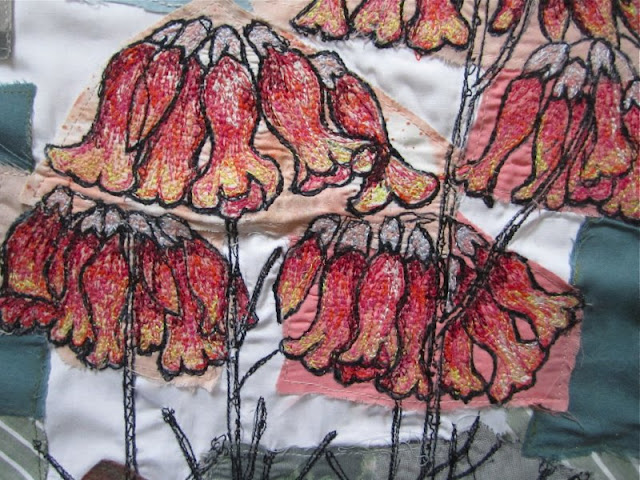 One can not really beat nature for color, but what inspiration!

And as winter loses its grip on the garden,
spring whispers that it's time for the wildflowers to make their appearance. 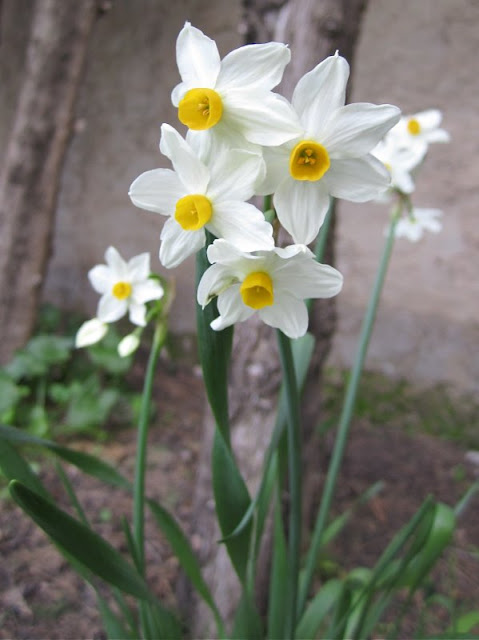 Time to get out my sketching supplies again--
there's another shirt sleeve to be transformed!
36 comments:
Labels: Art quilts, garden

It was destined for the rag bag, my worn out bathrobe—one of those pieces of clothing that get used and used and fit your body comfortably, yet never get any attention. The fleece was pilled, stained, and worn thin in places.  I really didn’t care for the color, a purple, which I had chosen as the best of what was available on the rack—you know, best of the worst.

However, a dilemma faced me--how to replace it. Obviously, I could buy a bathrobe, but probably not in a color that I liked. Or, I could make one, but, I would then have to find a pattern and go hunting for bathrobe fabric—if-fy at best. I started toying with the idea of sewing on top of the rag bathrobe. Nothing to lose.
Then Melanie Testa announced that she was going to spend December 2011 working on and posting about a beautiful red velvet jacket that had seen better days (here). She organized a Flickr group that she called Rockstar Boro (here), “boro” being a Japanese method/art of recuperating and mending cotton fabrics by hand. The perfect motivation! So I tagged along in the Flickr group and began my bathrobe.
My color choices from recycled fabrics: 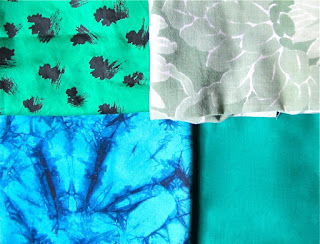 I do like blue with green--and then a bit of purple snuck in: 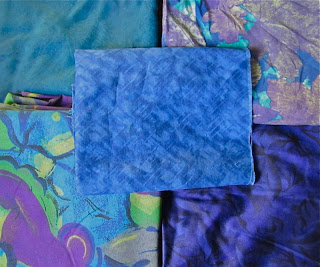 At first, it looked like it would be my worst piece ever. This is the closest you will see of the “before” bathrobe. I don’t want to publicly humiliate myself.

The purple slowly disappeared under rectangles and triangles of various sizes that were machine appliquéd onto the fleece, raw edges showing. The fleece was surprisingly easy to sew upon. Very time-consuming, however—there was a lot of ground (or fleece) to cover. And to think that I considered going back into it and adding hand embroidery… 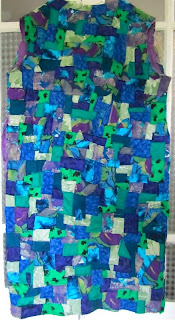 However, the appliqué did not appear strong enough to survive the washing machine. So I tested machine-quilting the arms with a scribble. 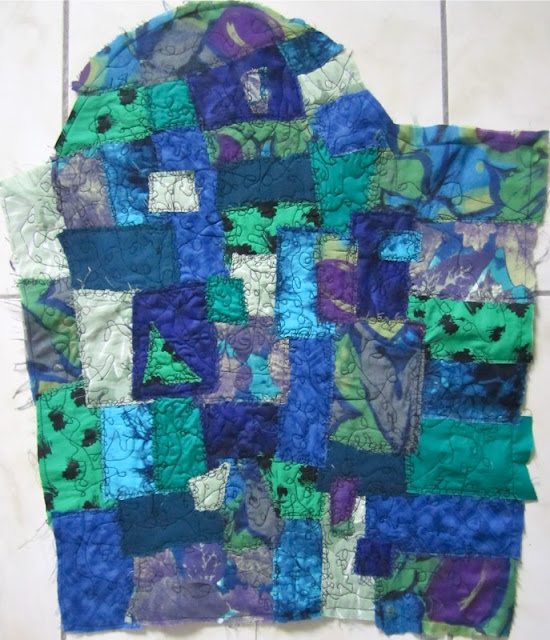 When that got boring, I started to put in simple shapes--houses, hearts, leaves, flowers, 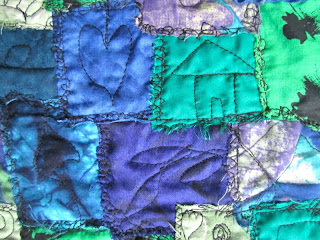 and some wobbly cars.

With all that machine stitching, my soft bathrobe became stiffer, however, the washing machine should take care of that. Hand stitching would have worked much better, but would also have taken another 5 years. You have to choose your battles.
I thought about adding a lining, but now I like the purple with the black stitching. 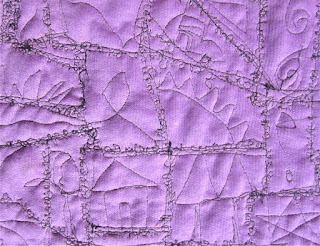 So I put on bias binding, changed the buttons (old pewter ones from my collection), and did the buttonholes by hand. As the internet is so public, you see the headless photo of the finished product: 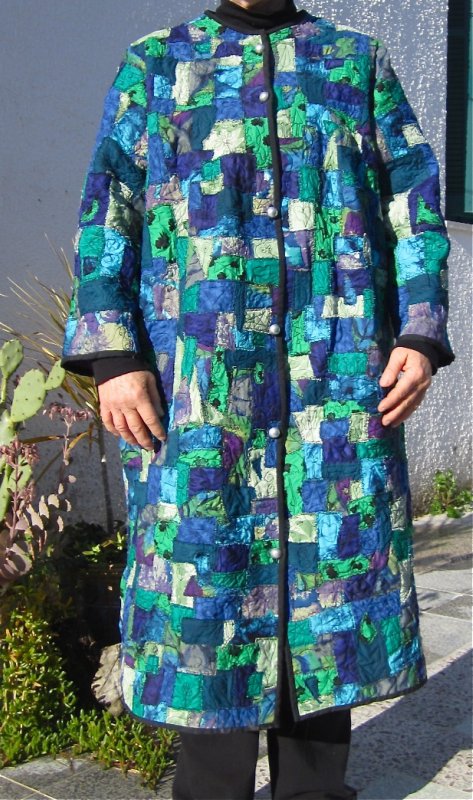 In the end, this isn't very “boro.” In fact, I’m just not a very “boro” person--I like playing on the sewing machine too much. However, the Rockstar Boro group was nice not to kick me out. In fact, they were encouraging (Thanks, everyone!). Still, I do like to admire other people’s work in the boro style, and Jude Hill’s Spirit Cloth blog (here) is a good place to see some exceptional creative work along those lines, and she lists other sites of interest.

Problem : my "new" bathrobe is now so beautiful that I don’t dare wear it!
48 comments:
Labels: patchwork items/clothing, recycling 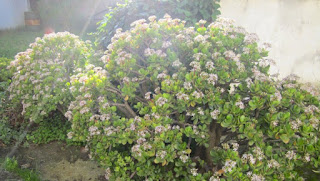 During an exhibition of my art quilts, someone noted that I had different periods. Well, no. Rather, different strands of thought pervade my work and keep coming forward. The strands intertwine, sometimes linked by technique, sometimes by color, or sometimes by ideas. For example, the War and Revolution theme persists, and connects to my strands of thought on social and political comment. Counterbalancing these themes, another, more peaceful, strand of thought concerns The Garden.
At the most basic level, The Garden represents my own garden. As I am blessed to live on a small farm with a luxury of space, my garden is large enough to contain a small pomegranate orchard, which now sleeps. In the meantime, other plants put on a fanfare in the winter garden.
It’s a good year for the jade plants. These 25-year-old plants have gone wild with flowers that draw the bees. 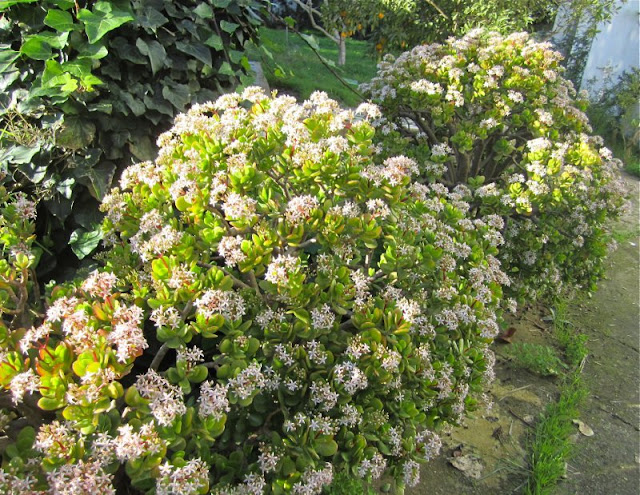 I can’t remember having seen them put on such a display.
Other succulents are getting ready to bloom, ready to burst forth. 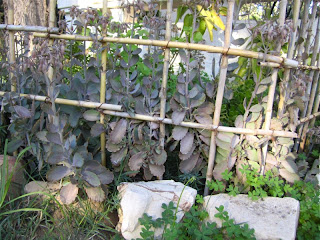 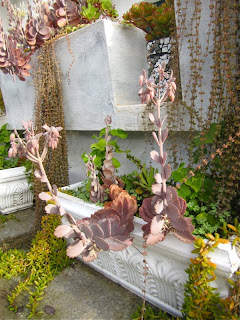 There are a few winter roses as well. 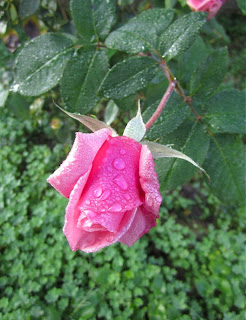 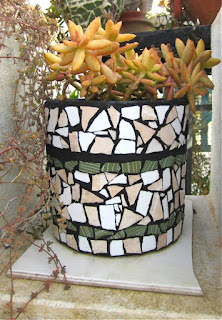 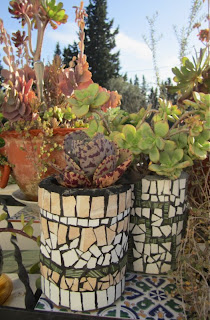 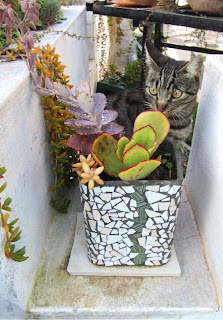 The cats got curious and pointed out that bloggers post pictures of their pets all the time. Ok, ok, I got it... 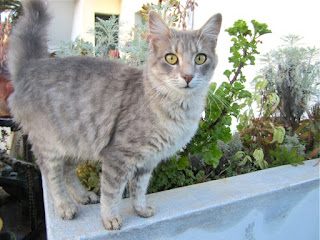