Extreme sports draw attention, however, it is unlikely you will ever find me bunjee jumping off a bridge, jumping out of an airplane at high altitude with a small pack strapped to my back (that thing is supposed to save my life?), or climbing the Himalayas. Rather, extreme needleturn appliqué gives me all the thrills I require.

My artwork is generally idea-driven. From somewhere, something appears, grips me by the throat, and demands expression. Therefore, I consider possible colors, materials, and technics. Yet, one exception comes to mind. Dare I admit ? Extreme needleturn appliqué dominates my life--I’m hooked for life on that process. It’s magical. Fabric, after all, goes in all directions if allowed to. Consider all the rulers and gadgets that have been invented to keep fabric square and under control. Ha! I threw control out the window! Let the fabric go where it wants to. Illumination: fabric on the bias is a wonder of nature.
It all began about twenty-five years ago with this humble piece that I still pick up and stitch upon from time to time.

I layered four 5 inch wide stips of fabric (including a shiny satin and patchwork leftover from a garment) and began doing reverse appliqué. 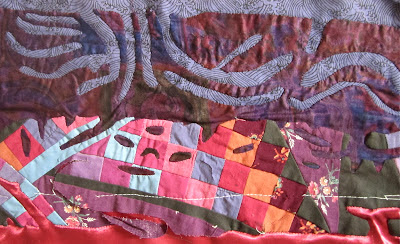 Maybe someday it will work itself into a piece.

Those red lines seemed so simple yet so elegant in movement.

I also used leftover patchwork scraps to appliqué onto a patchwork background.
Coral, (37½”x54”/95 cm x 1m37, April 1997) part of my beach series, is hand appliquéd and machine pieced and quilted. The border fabrics are hand painted.
fabrics.
I confess to one magical trick to produce thin appliqué pieces. It's all in the needle. At my local village mercerie (notions shop) I found a long, slender needle that I could grip easily. I immediately bought a whole package and discovered that my needles were milliner's needles--number 7 being my predilection. You've certainly heard that question: if you were stuck on a desert island, what would you have packed? I couldn't live without those needles...
Of course given my nature, my appliqués have become more complex. However, I still have an uncomplicated piece or two going (commonly referred to as the "early extreme style"). A current WIP (work in progress) that I will eventually cut apart: 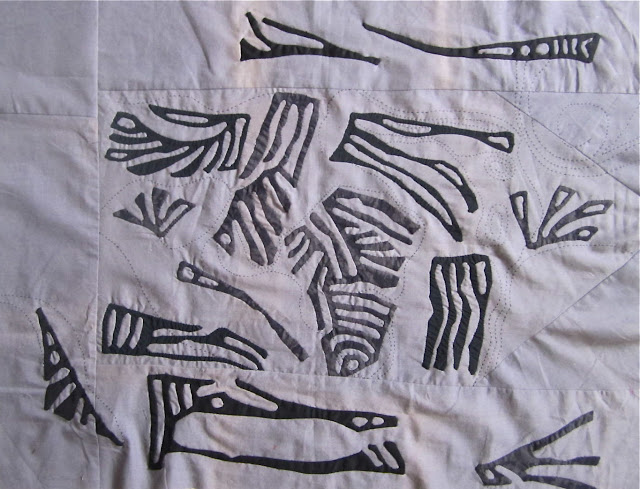 The method is simple. Cut out a piece of fabric in any shape, or use a large scrap that already has an interesting shape. Needleturn appliqué down one side and then cut into the shape as you go to create holes, lines, gaps, waves, etc. In this piece, I've added some stitching lines as well. 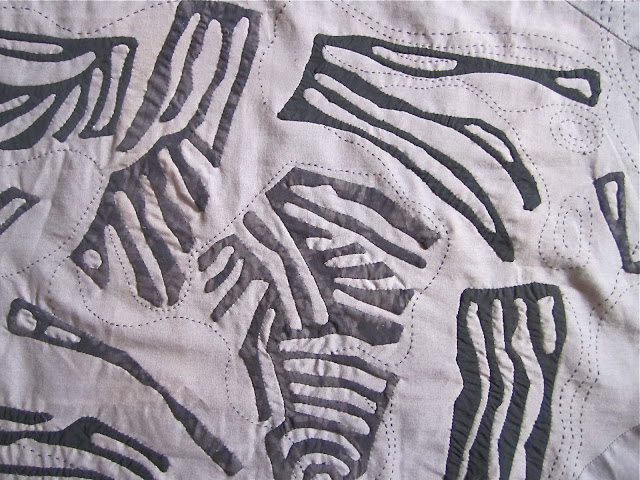 Another WIP. This garment looked so worn at the edges that I began adding a border while glued to the AC this summer. At first, I considered following the leaf design of the fabric, however, that seemed rather expected and monotonous.

The rules for this appliqué: each piece must be rather small and have a different design. I find the confusion of designs pleasing as the leaf design begins to recede. 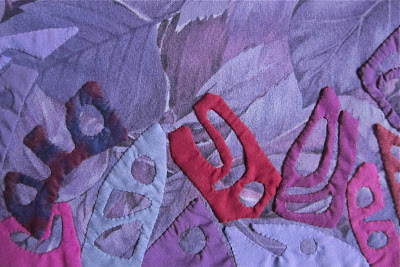 Ahh, those purple and plum colors. It must be the figs from my garden that influence my choices. This year I ventured into drying fruit. The fig harvest was so bountiful and the weather so hot and dry that I now have 10 k. (22 lbs) of delectable dried figs.

Can one beat nature for its colors and bounty?
Labels: Art quilts

Nadia, your artistry amazes me. It is just gorgeous. And that you so often take things discarded by others and turn them into things of beauty just makes it so much better!

I adore reverse applique and have practised it over the years. I like the unpredictable kind where you don't know what is going to show up! I also like this technique as practised in the Alabama books--the one she calls reverse, reverse applique. Too much fun already. Your work is wonderful. I wish we could get together for the afternoon to stitch and chat!

Your art boggles my mind...just beautiful...love the colors in the onions.

OMG, Nadia, what amazing work you do!

what a great intro to your beautiful work Nadia !

The purple leaves piece is just spectacular. I love the contrast of commercial print with the lovely little freeform appliques on the edge. Exquisite work.

Such beautiful shapes and forms you are creating. Your work is always so beautiful .

This is true inspiration! Thank you!

Nadia, this is all so interesting to see your older stitch work and to hear you explanations and inspirations. I'm looking forward to part 2. Oh and the figs make my mouth water!
Is it cooling down yet? We are now enjoying sunny days and cooler nights. Autumn is here.

Nadia~ Your work is truly amazing! It's so interesting to see so much of it here together. The story of you :)

This is something that I never tried. I have seen a mola exhibition a short time ago and I was fascinated. Your use of reversed appliqué is captivating and very inspirational.

Beautiful! Love your colors and images! Thanks for the Milliner's needle hint. I've read about them and keep meaning to try them.
Mindy/Minka from the Diaries group.

Nadia, your techniques are amazing. Love the energy and colors! And, yes, who can beat nature for its colors?!!

It's so wonderful. Thanks for commenting on my blog.

I love your wild and free applique! Letting it tell you what it wants to be seems so exhilerating. Thanks for being so creative and for sharing it with us :o)

thanks so much for explaining...it's new for me.
The needles..I've to search them
the colors of nature are never to be copied and so so pure.
love your work but thats something you knew already

Haven't you been busy! I love your work, thanks to you for sharing it with all of us. I too, love needle turn applique. did you have the milliners needles or did you buy those at the shop in town? I will have to check on mine.

Nadia, finding your site this morning has been such joy. I just spent my morning going back through your entries from this past year and I wanted to tell you that I feel that this is exactly what a blog should be. I'm amazed by your work, no doubt, but I am inspired by the beauty you create around you, the history you share and the inspirations you bring to this blog. I love applique and have done alot of mosaics as well. I packed those up because the cloth is so much softer to work in :) but I'm seeing the connections now, the deconstructing and repurposing of cast-offs. Thank you for sharing...amazing and fun.

This is wonderful work...it looks like fun and is mesmerizing to my eye!

Wonderful post!"Coral" is gorgeous!
Thanks, Nadia for your visit in my blog.
PS:I like dried figs!
Kiss,
Dany

Nadia it has been pure pleasure visiting your world today. I had lots of catching up to do and you never cease to amaze and delight me. Of course your needlework is over the top beautiful and today I caught myself chuckling with your story telling.
Thank you for sharing and for the sweet comments left on my blog!

Incredible that your technique!