Yet a Rockier Road

Let’s begin with Good News. A friend just opened an Etsy Shop called Egyptian Quilts. He features the appliqué work of the Tentmakers of Cairo. He’s offering a sale for his Grand Opening so pay him a visit at :
http://www.etsy.com/shop/Egyptianquilts
I’d like to thank all who have sent concerned emails for the recent news.
The event : The appearance of a Youtube video about a movie slanderous to the Prophet Mohamed caused massive protests throughout the Arab world. Consequently, Tunisia drew attention in the international news after the extreme right organized protests that ended in an attack on the US Embassy.
Protesters climbed the Embassy walls, burned cars in the parking lot and ransacked the accessible recreation area (commissary, tennis courts, swimming pool). Then they went to the American school across the street, which they looted and burned parts of (including the library). Pictures surfacing on Facebook show looters walking off with computers, TVs, and even garden hoses.
You may wonder about police presence. Well, they appeared, but were overwhelmed and ran out of tear gas. Later in the evening, two police stations were attacked and torched in different cities.

The results : Tunisians, understandably upset, are questioning the inept management of the whole mess by the government, which is run by a religious party.  Furthermore, they wonder at the government’s lenient policies toward extreme right groups whose members have frequently broken the law in violent public confrontations only to be acquitted in court.
The US government has withdrawn non-essential personnel from the Embassy and they discourage all visits to Tunisia. Great. We're still trying to figure out the meaning of all this. 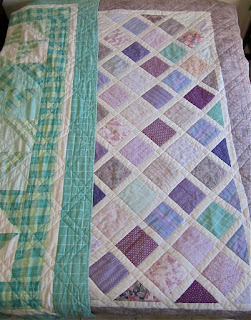 Feeling frustration, I turned to the piece I'm working on for Jude Hill's Spirit Diaries. Yes, I broke down and took another online class, however, this one is not project oriented, but a discussion on technique and process with an active forum. I thought that this could be my anesthesia, a way to listen to something else besides conversations and rumors of impending doom. However, it is apparently not meant to be.
Jude chose 'Wings' as her "filter" or theme for the next few months, which I happily adopted to my project, a worn, double-sided bed quilt that I'm using as a canvas. I chose the purple side to experiment upon and to leave the green side for later.
And so, I began appliquéing abstracted wings of two triangles (or a bowtie) onto one corner block. A basic structure that I modified with reverse appliqué. 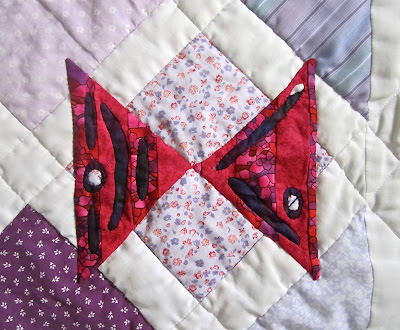 I could have happily continued exploring ideas connected to wings, however, I find that I'm now being pulled toward Icarus. You probably know his story. Daedalus, his father and a brilliant craftsman, warned Icarus not to fly too close to the sun or to the sea when they made their escape from the island of Crete using wings made of wax and feathers. Being young and exuberant, Icarus of course went as high as possible, only to find that the feathers fell off as the wax melted from the sun's heat, and he plunged to his death in the sea. 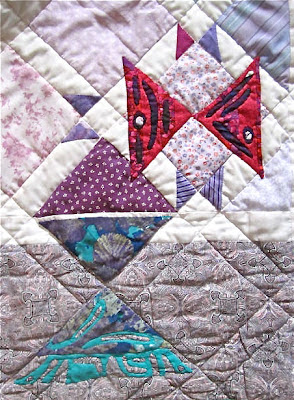 The story of Icarus thus contains a warning, yet it is not about extending oneself or trying to reach greater heights. It speaks of extremes that we should avoid because they are harmful to us.  The warning reminds us to keep our balance and to remember the virtues of moderation.
Thus, in these troubled times of extremism, I find the story of Icarus compelling. Moderation and Balance.

To go from disorder and confusion 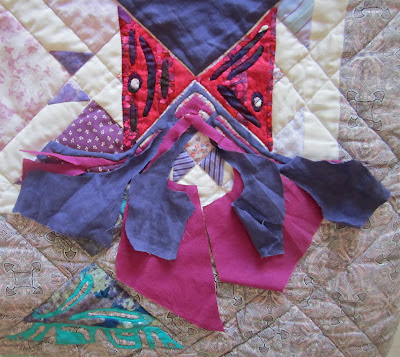 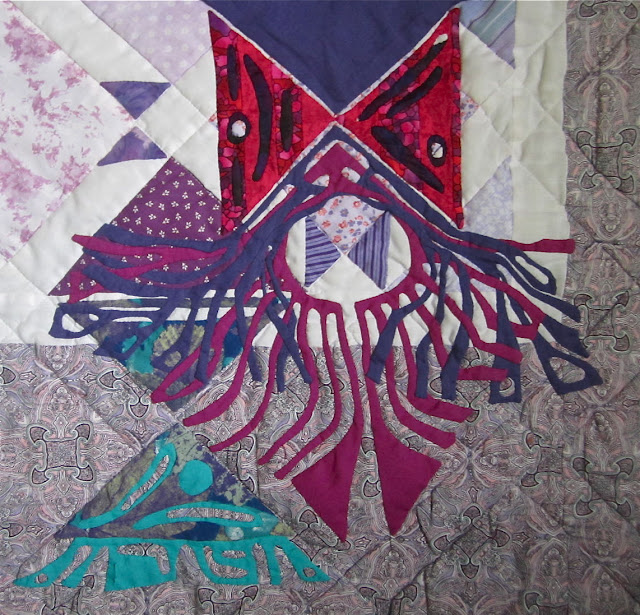 Your appliques are the best! Love where this redo is going. So sorry about the problems in your part of the world. We've gotten some beautiful photos via Facebook showing Muslims with signs saying, basically, that the PEOPLE are not behind all this madness and do not condone it, reaching out to the world in peace and understanding. I can't imagine the tinderbox you live in -- here these days we just get daily doses of lies, hatred and vitriol aimed at other Americans.
Take care of yourself and be well, Nadia.

I'm so sorry about all the disruptions. I've watched on TV and can't understand for the life of me why we can't all live and let live. How I wish none of these types of events were going on in the world. Nadia, your link to the Egyptian quilts do not work. Just wanted you to know because I am very much interested in viewing the quilts. We must continue to pray for peace.

Thanks, Carol. I fixed the link so it works now.
nadia

Thank you for your updates about the situation...may things settle to some balance and harmony again. It helps to have a local viewpoint such as yours...the media does not help things either. Be safe and well. I love your applique..just beautiful!

Nadia, I thought of you when I was watching the world events over the weekend. So disturbing and confusing . I have such a difficult time getting my head around such hatred and brutal behavior. Your posts have shared so much about your world in Tunisia thru your eyes.
Your piece is very beautiful and revealing too. We all look for order and harmony. Did you mean to stitch USA or create that illusion in the green area at the bottom?
I hope all is safe for you.

that's some beautiful, free-spirited applique. you have been in my thoughts.

Thank you for explaining what's going on in your part of the world. I knew I must've missed something important when we were on the road last week, and have had a hard time piecing together what it was.

You are a sense amongst the senseless, sanity in the midst of insanity, taking a creative direction to pierce through chaos. Icarus didn't calculate the heat, hubris got in the way of clear thinking. May you, and all beings everywhere be safe and free.

When my kids were small, I made them sit down and talk things over until they came up with a solution to their issues that didn't involve fighting. Now they are all grown and, not only the best of friends, but peacemakers in their communities.
It makes me sick to see such violence that solves nothing ... and we are getting it here from the Chinese who want some islands now that there might be oil in the area ... and are angry that the USA returned them to Japan. At least the embassies are down town.
I think the world should be run by quilters... stitching together rather than tearing apart.

I think we are all seeing a certain amount of unrest in our world right now. Yours is more extreme, but it's pretty widespread. It really helps to have something we enjoy doing that takes our attention away from things we cannot control.

I wondered what and how you were doing with all this upheaval going on in your neck of the woods. I'm glad you are safe and keeping busy. I like what you've done with this example of your applique...very unique design.

Nadia~ This is such a thoughtful & powerful, yet peaceful post. I appreciate your sharing a first hand view.
Take care.

pleace take care Nadia.
Here in the Netherlands are protest meetings too and , so bad, people haven't even seen the film.
The world is strange

Nadia , this is a wonderful, thoughtful and thought provoking post. I appreciate it so much. My prayers are with you and yours.I pray for the world actually , that common sense and love and creativity may prevail. You have chosen creativity- the right path. God bless!

dear Nadia, you and your animals and family were of course the first ones to spring to mind as the events in Tunisia spiral across the news. Your post is a clear sighted assessment, and very welcome. So hard to know what to believe from US media. Icarus, yes. -sus

Wow! That's horrible what is happening so close to you! I'm glad art is helping, and hopefully healing. I for one wish that most protestors would understand that many (most) of us Americans are sick that one person would abuse the freedom of speech that we have here. At least that's the way I see it. I refuse to even look at the Youtube video. FWIW, I tried to turn such an awful thing around and use it to teach my own 2 sons, who are now very much interested in Youtube, about the great deal of responsibility they, and we all must exhibit using such a tool, combined with the freedoms we have. I hope you are safe.

First - it is good to hear that you are safe. I have had and will keep you in my thoughts as this chaos continues and hope for a quick resolution, if at all possible. Now to your expressions thru your
exquisite designs and colors for your appliques. Such calming therapy and brilliant design. I wish you peace and safekeeping.

Keep safe; my thoughts are with you!

Oh my I love everything you are doing with your quilts. I have never seen such great pieces before. I would love for you to join me at www.sewcraftykathy.blogspot.com

The Egyptian quilts are beautiful, thanks for the link. I hope you continue to find solace and balance in your quilting--these are unsettling times, indeed.

Your blog is very thought provoking. I am at a lost as to why people must act violently to get their anger across to others. "An eye for an eye" only leaves everyone blind.
I visited your friend's Etsy shop. Such gorgeous work! I did a few favorites and pinning.
You always show beautiful soul-searching artwork.

How difficult it must be to live in the midst of such turmoil. Yet you manage to convey such pragmatic solutions. As usual, I love what you're doing with this applique. Be safe!

Thank you for this thoughtful post. You've hit it on the head with the Icarus story. Love what you did with your disorder and confusion applique.

Thanks for your visit and kind comment. Already it`s the translator into my Blog, thanks .Your appliques are lovely.
Happy day.
Hugs

Keep up the good work - both in quilting and in trying to make sense of things. Keep well, happy and safe...

Friend, you do amazing work! Thank you for sharing it with us :o)

GREAT applique, and a good story. I didn't know that about Icarus. Stay safe!