A few years ago, I said wistfully to my husband, “I wish I could renovate a cute, little ol’ house, a fixer-upper.” He replied even more wistfully, “And what about our house?”

That made me open my eyes. Although it seemed like just yesterday that we finished building our home, it had indeed aged, and not gracefully. You know those lovely old Italian villas with peeling paint, rusty wrought iron and broken masonry? Sort of shabby chic types of places? Well, Italy isn’t that far away, and the construction in Tunisia is with lots of masonry—brick, cement, and tiles—but my house was on the shabby side without the chic, more rundown than anything else. The worst were the sinking floors—we didn’t have one flat floor in the house, not even in the bathrooms and the doors didn’t quite close right anymore. And then, there were large cracks in the walls to repair as well. We had been dragging our feet because of the huge task of putting in new floors, which meant moving everything out and gutting the house. This was hardly a DIY project.
Once the masons got started, the pounding was infernal because the tile floors rested on a cement base that had to be broken and redone. Thick dust settled everywhere and piles of broken tiles, cement, and bricks accumulated in the yard—the sidewalk disappeared and the grass took a beating. When the masons finished a room, we followed right behind and painted it and moved back the furniture, which required attention as well. On the positive side, the masons finished in three months, a feat, I’m told, for such a huge job.
There’s nothing like before and after pictures to add drama. Well, these are during and after pictures, but they’ll do. 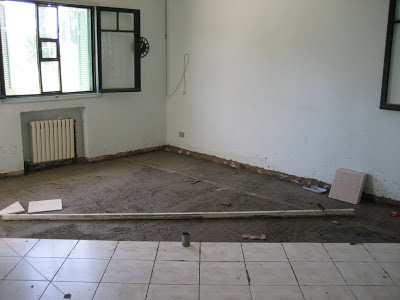 The living room was a soft green that had yellowed over the years. We chose a marble-design floor tile that lightened the room. Note the old-fashioned radiator. Yes, they work very well for Tunisian winters. The windows may appear odd because we need permanent screens. I could write an entire post on my battles with bugs. 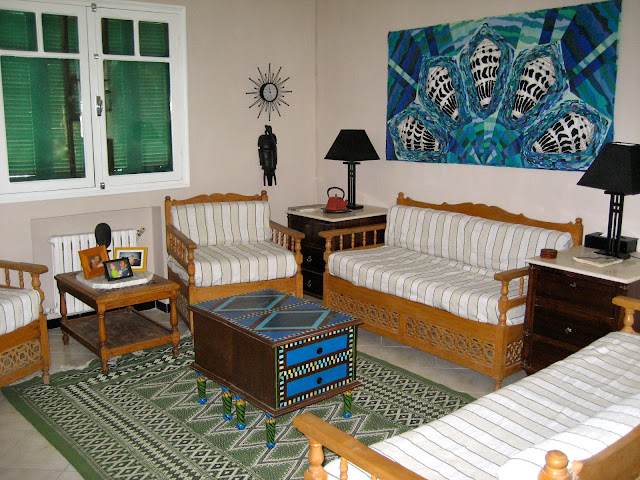 I wanted a slightly warmer, neutral wall color and I decided to hang some of my art quilts. I gave up on curtains for the living room. With exterior shutters on the windows that are closed at night, curtains become superfluous. From a practical point of view, curtains require monthly washing (at least) because of the dusty environment (oh, p-l-e-a-s-e). The cushion covers and flat-weave rug (Klim) are hand woven--one of the advantages of living in a country with a weaving tradition. The "coffee table" is made up of two bed-side tables that I painted many years ago. The side tables by the couch were actually the drawers of a very large desk. I love having drawers (so useful for hiding stuff), but who needs a huge desk these days? I've got it all on my laptop. I added marble tops to the drawers. Yes, my style is purely eclectic...

A reminder of the Mediterranean beach culture, Sea Shells V (Dec. 1998, machine appliquéd, embroidered, pieced and quilted) was inspired by a small shell and the blues of sea and sky. 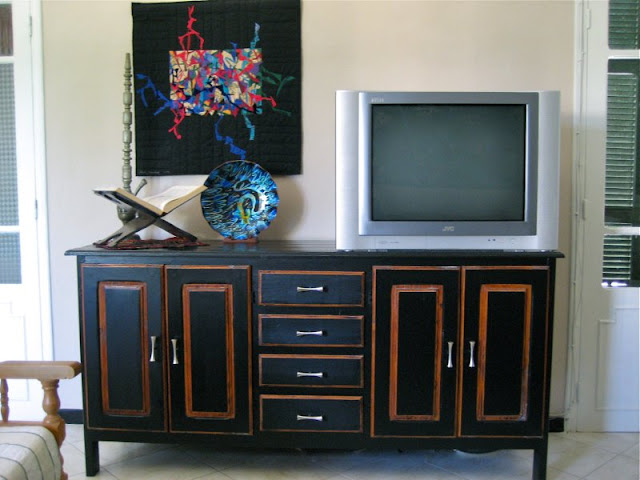 The dining area buffet was so horribly boring, I wanted to junk it. Instead I repurposed it. Painted black and sporting new pulls, it now hides TV technology and miscellaneous items. 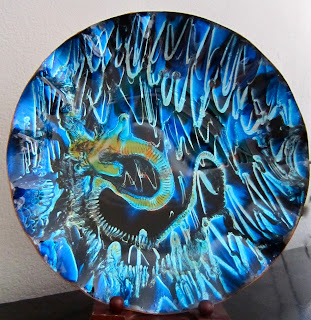 The plate deserves a mention in passing. A gift from a Mexican exchange student to my parents forty years ago, it's made of pigskin that has a coat of glass--maybe the correct term is "glassified"? Not visible in the photo, the border undulates and the back is ochre. This plate with its intense blues and vivid design was the most unconventional object in my parents' home (besides me, some would argue). It never fails to catch my eye and I've never seen anything like it.
So much for the living area...more to come.
Labels: Art quilts, home décor, renovation

The sea shell quilt is gorgeous!

Wow, what a project! The results look great. And I love that sea shell quilt, too.

Glad you dropped by my blog, and I've enjoyed looking at yours. I intend to keep reading - you've got a great combination of an interesting life and interesting art.

Thanks for stopping by, Nikki and Judy. I've so enjoyed exploring the blogger's world with so many creative blogs like yours. So much inspiration.

Wow, your seashell wall hanging is glorious and fits so beautifully in your room.
Thanks for dropping by Tanglewood threads and welcome to the blogging world...so much wonderful work being stitched out there.

Thank you for finding me, because I love your blog! Absolutely fascinating! I only just read the first page so far and I wanted to tell you I love your sea shell wall hanging. It has such a striking design. Wonderful thank you x

Thanks for stopping by my blog today and leaving some wonderful comments.......loving the sea shell hanging and the room is wonderful too.

Nice to have a look in your house :)
Different from mine in a different country :))
Like the art quilt!

Again, fascinating style of decoration and quilt. love this abstract quilt and the sea shell one too. You are a great inspiration indeed. Thank you.

I am thoroughly enjoying your blog - what wonderful colors in your art quilts. Your renovations look fabulous.

Love-love-love it ! Your shells artwork is amazing,so well-balanced ! I hope you will go on with quilting...
Katell