When I first came to Tunisia many years ago, not all households had bathrooms. Yes, they had indoor plumbing, with toilets and sinks, but not an official bathing space with a bathtub. The reason was simple: people went to the hammam (public baths), men in the morning, women in the afternoon. Today, private homes have bathrooms, however, the hammam remains popular. In home décor magazines, I’ve even seen bathrooms in extravagant homes designed like a mini-hammam with lots of marble, built in benches and large sunken tubs—very lovely.

I went only once to the hammam. I found it a bit too public for my personal taste, however, I like the idea and if I had been raised in Tunisia I would have probably gone regularly. You see, the hammam is not just about getting clean. It’s a place where people meet, and there is a leveling factor, it’s rather democratic: everyone is in some state of undress. You can’t show off or hide behind your clothing. Plus, it’s a total experience that takes at least a couple of hours: there are several stages in several rooms: the steamy sauna, the cool water area and, of course, there is the masseuse (masseur for men). You stretch out on a cement slab and she works you over with a rough wash cloth. She charges about a dollar and a half for a full body scrub, about five dollars for a full body sugar waxing, which is traditional for married women. After further washing and rinsing, you come out with a new skin, sparkling clean.
What I find the most interesting about the hammam is that it serves as a social space. (There are those who argue that there is an actual hammam culture that overflows into other social gatherings, but that is the subject of a lengthy article.) People meet there, everyone meets there: the young, the old, the middle aged—as I said, it is a rather democratic space. Even mothers with their small children come so no one is left out. The hammam includes a casual café: cool drinks are served at the end, if desired, in the “cooling off room” (one does not immediately exit after bathing—do you want to die?). People may also bring a snack to restore their strength after such an exhausting experience.
During the colonial period (which ended in 1956), the French would throw accusations at Tunisians about their women being “cloistered,” “veiled,” and “sequestered” because Frenchmen couldn’t penetrate the social spaces and see (with a connotation of possess) Tunisian women. However, women participated in a commmunity that exists at the hammam, at marriages (frequent summer events), at the mosque, etc. In fact, they had a better social life than I do!
So my thoughts on the hammam lead to my bathroom renovation. The gutting process of the bathrooms was dramatic. 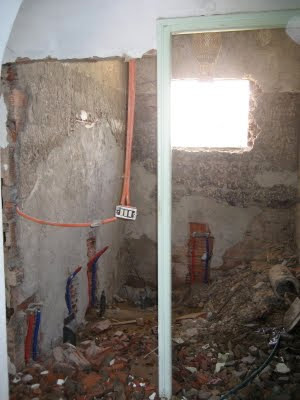 In the main bathroom an interior wall came down because of a leak. The floating light switch should be in the middle of a wall. We wanted to keep the fixtures because of their quality, but that dark green seems to be out of style in Tunisia. Tile-hunting was tedious. We settled on white tiles that cover the walls to the ceiling and we chanced upon a green tile that was cut for the horizontal lines. I wanted more of those green tiles for mosaic flower pots, but they’re not produced anymore, drat. 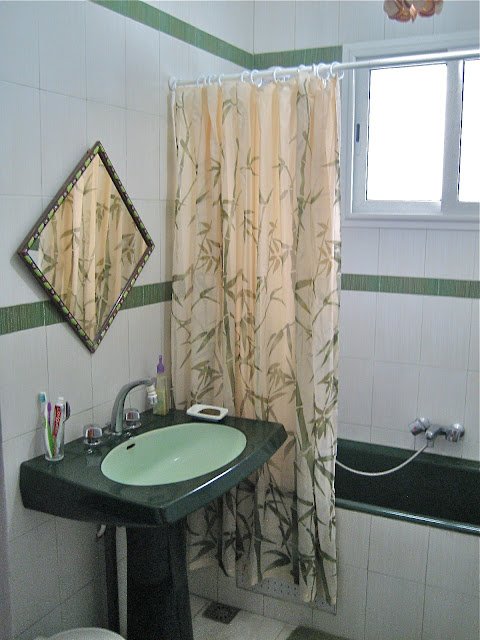 The macramé ceiling light remained. I like it too much and I remember all the work. 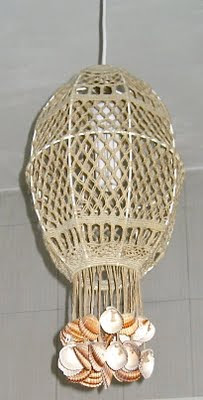 Under the category of smaller is better: the mini-bathroom/shower stall. Originally just a toilet and sink, it was never really used much, maybe it seemed too dark and cramped. 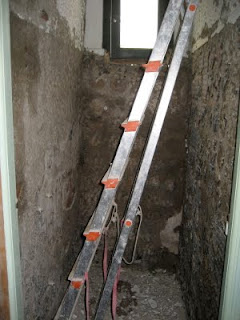 White tiles set on the diagonal made all the difference and the mason cussed a blue streak for having to work in such a cramped space with such small tiles. 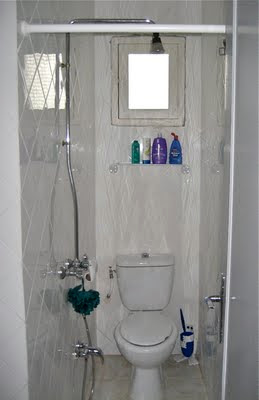 The toilet does double duty as a seat under the showerhead and the shower curtain is clear with pockets. 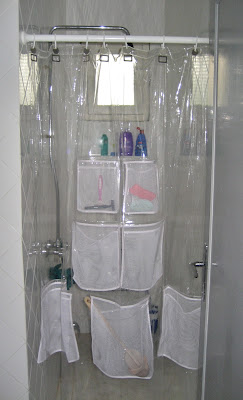 Minimalism at its best, just the strict necessities, but exactly what I wanted. White anything usually gets dusty and dirty so fast, but a quick swipe of the walls with a squeegee after showers keeps it impeccably clean and white. So easy.
And obviously, I prefer showers, so I suppose that my hammam experience will remain limited to one visit.
Labels: home décor, macramé, renovation, Tunisia

Undergoing renovations is stressful, but the end result is so worth it! I love how it all turned out! It's beautiful! I can just imagine the cussin' the mason did! The hammam experience does sound like something you would need to have been brought up with to enjoy. Sort of like the topless sunbathing at the beach in Europe!

Oh I wouldn't want to tile your mini shower/toilet space. No wonder the tiler was cussing! Nice job. Have you invited anyone over for a hammam experience in your newly renovated bathroom? :)

This was so interesting! I had always wondered how that whole Hammam thing worked. I could really use a back scrubbing. Wish I lived close by. As for your new bathroom. Congratulations! It makes sense to have the toilet with the shower. It would keep the potty clean. Only question...what do you do with the TP to keep it dry?

Thanks for the comments, everyone. As for that small detail of TP...the holder is open-ended so I just whip the TP off the holder and put it on the shelf. So often it's the small things in life that count!

I can just imagine the steam coming out of your wee shower/toilet room as the tiles went up!

Oh my that is a small space, but i like the fact that you can take a pee and shower all at one time, i love to multi-task! LOL

Nada, that was so interesting and I thought that photo of the man asleep last week was amusing...I would have worried he had a heart attack. I looked for your email and wanted to tell you that my old blog with the hippie won't let me post any longer so I started a new blog called Mary Lou and Whimsy Too. I hope you come and visit that one. I LOVED the 60's. and my Dad didn't understand us then....

Thank you for the visit Nadia. I would love to see what inspires that quilt on you!.
Love the macrame lamp and the blue and black quilt on the wall!

Bravo for this wonderful renovation ! I liked your writing about the hammam. I stopped in Istanbul last year but for too short a time to enjoy this experience.

Lovely! I like the touch of green, and the macrame light is beautiful. And the mini bath is a marvel of utilizing the space well!
We've stayed in several places where the shower head was over or very near the toilet... not a problem as long as you remembered to move the toilet paper before showering. LOL
When we'd get away to Jinja (Uganda) for a few days, we'd stay at a lovely B&B but could only afford the cheap rooms that occupied the space formerly used as servant's quarters. The three bedrooms shared such a bath. We'd always shower right away, one right after the other, then squeegee the walls and call it good. Real, honest-to-goodness showers were a highlight since that year we lived in the bush with no electricity or hot water (except what we heated on the stove).
So seeing your tiny bath brought back some great memories!