[I’d like to insert a disclaimer here: what follows is strictly my own point of view. Others may have totally different experiences and views. I do my best not to be an “Orientalist” (that is someone describing “others” from the outside looking in, usually in a condescending way), as Tunisians have made me feel at home in their world which has become mine. My intention is not to be critical.]
When I first moved to Tunisia, I found that people were friendly, polite, multi-lingual, multi-cultural, and generally well-educated thanks to aggressive government policies concerning education, developed at the time of independence in 1956. A large middle class dominated society and yet people were careful with what they had because one could not count on stores being well-stocked. Behind the serious business of daily life lingered a beach culture that bloomed as soon as the school year ended.
One of the biggest challenges to overcome were differences in mentality. Although Tunis and its satelite towns contain two million inhabitants, a small town mentality dominates Tunisian society. Families remain important and people do not move around very much. To have a job transfer to a city two hundred miles away would be the equivalent of going to the moon. Everyone knows or knows of everyone else, which means they don’t have to introduce others or be introduced. This created problems for me because at every Tunisian family gathering everyone knew me, but I didn’t know them and no one really thought to introduce me. I guess I was supposed to know everyone by osmosis! At first, I found this behavior rude until I understood the reason for the lack of introductions, and with time, I figured out who was who.
Getting used to how to conduct conversations took time. In my direct American manner, I would ask, “Oh, what do you do?” or “What does your father do?” or “Where do you live?” These types of questions would raise eyebrows, and someone might comment “What are you—the CIA?” One must ease into a conversation, however, this presupposes knowledge of the person with whom you are talking. It was a catch-22 situation for me until I gathered enough information by pestering it out of my husband, who is Tunisian and couldn’t quite fathom my difficulties. Genealogy is a safe subject, in fact, a preferred subject. Tolkian’s description of Hobbits always delights me because it fits Tunisians to a T. If two Tunisians who have never met before sit down together, the conversation inevitably leads to genealogy topics, and they will spend a couple of hours in hot discussion until they find a mutual relative—and it would seem that just about everyone is linked to everyone else in Tunisia. For people who know each other, they’ll gladly spend time on the subject, as well. These conversations can be very long, intricate, and boring to the uninitiated, however, I have developed some defense mechanisms: I just laugh and find someone else to talk with, or I participate, because thanks to my research on Tunisian women’s history I have learned something about Tunisian genealogies…maybe not enough to hold down a two-hour conversation, but enough to be polite.
Every society imposes rules upon its members, and Tunisian society is no exception, however, because it is such a small country with a rather sedentary population, one must be even more careful. In a country without freedom of the press (until 14 January 2011), gossip is a national hobby consequently, it would seem that everyone knows everything. One day, a neighbor (meaning someone living within a two-mile radius) went to Tunis and stopped by a shop to get photocopies of ID documents. The woman working in the shop noticed his address and asked “Do you know the American who has bees and sells honey? They say she lives in your town.” 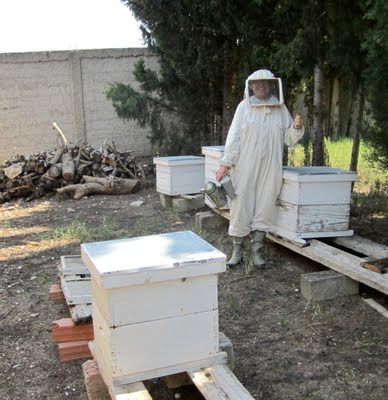 Well, that would be me, and I might add that I rarely visit that part of town and that I had never been to that shop. He replied that I was a neighbor and since he had to come back, she told him that she would like to buy a bottle of my well-reputed honey (Tunisians worry about getting a watered-down honey and willingly pay a higher price for a good, pure honey), if he could bring it. Which he did…it’s such a small world that it may seem constricting.
And yet, I have a huge advantage. As a militant non-conformist, I would have difficulty fitting in anyplace, but in Tunisia, people make allowances for what they may consider eccentric behavior: “Oh, it’s ok—she’s a foreigner.” And so, I live in-between and have the best of both worlds—and no regrets.
Labels: Tunisia

I clearly have scarred you with my constant accusations of 'Orientalism'... I just wrote you A LONG comment and it evaporated. I myself have changed my view on Orientalists and see them as bringing a lot to worldly knowledge. In fact, I'm very interested in their perspective on things. They see anomaly where I see normalcy... What better than to read someone else's perspective on the mundane? I have made peace with the Orientalists because I owe a lot to Montgomery Watts' Life of Muhammed or Lang's amazing Arabic/Engl dictionary, and even to Hans Wehr. It's about a certain gaze that we have toward we are not accustomed to. Orientalism became problematic when it became synonymous with Colonialism. There is a distinction to be made between the two nonetheless! I sure appreciate reading your perspective on things, life etc. in Tunisia. I second what you say on introductions, we are almost ashamed of going through them. I have only met 1 tun. who had no problem with introductions, it was a guy I met at UCLA a few weeks ago and I told him, that I sure appreciated him introducing everyone present. I congratulate you on carving a life of your own, where you have so beautifully designed its parameters... Should I say, where you have defiantly designed its parameters. You can get away with a lot, being the 'foreigner', I can get away with some being 'the daughter of the foreigner'... but still, the laws and rules of any society are always fluid, in fact, I suggest that the laws, rules and regulations are a lot more fluid that you perceive them to be. The world of women in Tunisia is a very intense and complicated world, where we all have secrets and we all so well keep them, a mechanism of protection of one another. I can give you concrete anthropological examples of this if you'd like. Keep up the blogging! I love seeing life through your eyes! I wish one day to be living the life that I would have carved for myself, instead of constantly living in a state of transition. Maybe that is what life is? A series of transitions... Oh, and one more thing, we rarely think of 'Occidentalism' which is def. a phenomenon we all suffer from, when we move from the Orient to the Occident. I suggest two novels which would give you the perspective of a Sudanese and an Egyptian who go West. Tayib Salih's Seasons of my Migration to the North and Taoufik Hakim's Bird of the East... Both very good novels, with a lot of meaning.

Dear Kahna,
I admit that because I study discourses and power, I find it difficult to separate Orientalist discourses from Colonialism, especially as pertains to feminisms. One of the fascinating things about those discourses is how they travel through time up to the present. There are huge debates around these questions, of course. Thanks for the book recommendations.
Your idea about carving out a life is interesting, but "transitions" seems more accurate a description. It seems to me that it's the travel to a destination that counts, not the destination itself.
best, nadia

It seems you are very happy in that outfit :-D.
Would love to taste the honey from you bees, but the road it a bit tooo long ...

hahaha
I could so relate to this post! Our city is not as big -- only 80,000 -- but it does have that provincial feel to it. It's been surprising how many people we know who, in turn, know each other even though we know them through entirely different venues (i.e., some through folk music, others through their profession or business, others through mutual interests such as quilting or aviation).
Makes me wonder... how do people describe me?!