The run-off presidential elections, scheduled for the 21st of December, have had everyone in Tunisia concerned and on edge. The borders to Libya were closed. A voting center was attacked in Hafouz (central Tunisia) when someone started shooting at soldiers, resulting in the death of the assailant. There was an assassination attempt on Beji Caid-Sebsi, one of the candidates, on the eve of the elections. All leaves and holidays were cancelled for soldiers, national guard, and the police who were at every voting center. 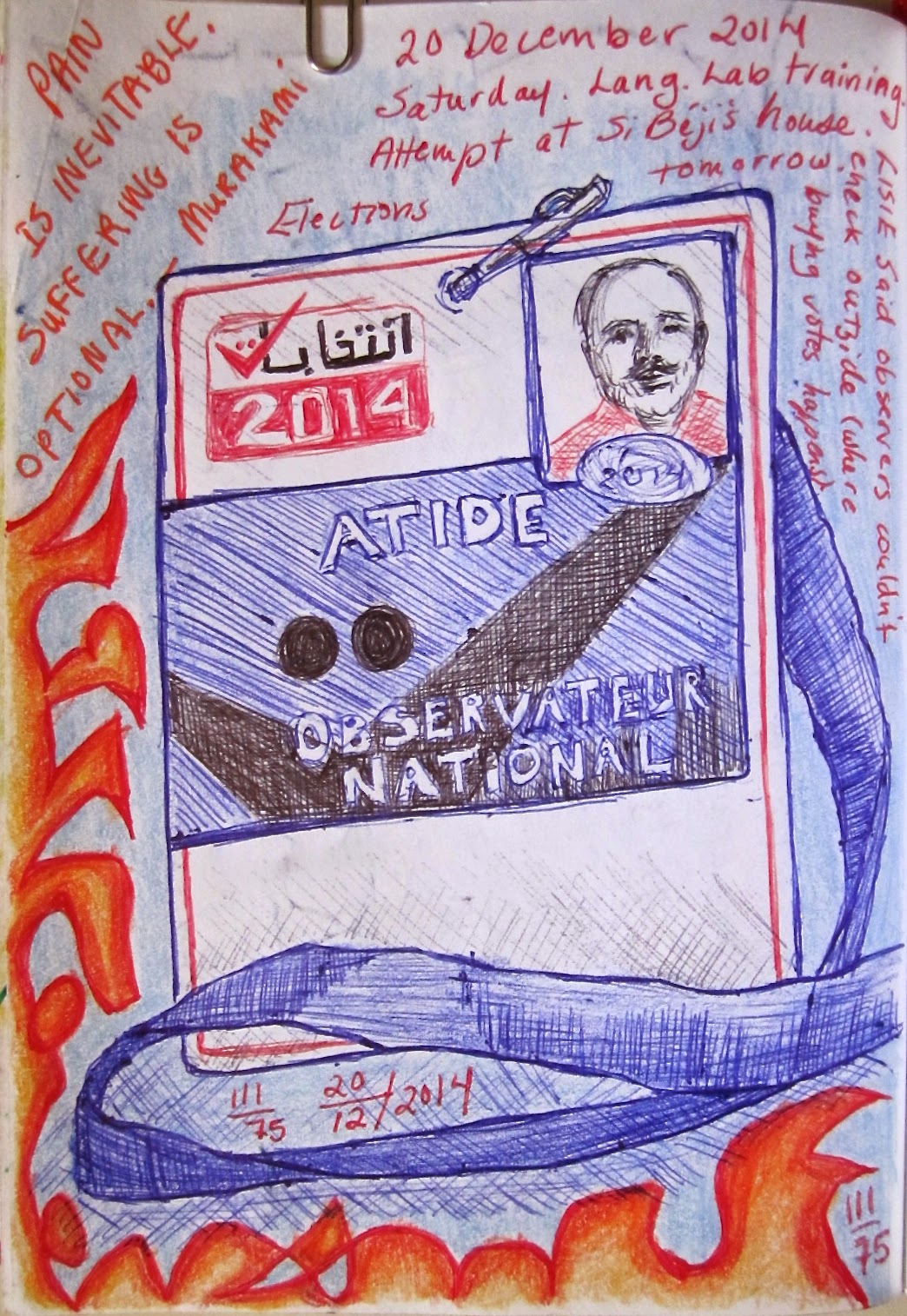 A family member volunteered to be an observer as thousands of observers were required to help the voting process run smoothly. Tunisia's elections under dictatorship have always been falsified, consequently the role of the observers was even more important in order to break a very bad habit. I drew an observer's badge into my small sketchbook to commemorate this historic event.

And historic it is. Tunisia has never had truly democratic and free elections for either Parliament or President. It is now official: with 55.6% of the vote, Beji Caid-Sebsi of the 'Nida Tunis' Party will be the first democratically elected president of Tunisia.

The need for vigilance remains. Certain Western powers and their satellites are unhappy with the development of a true democracy in the Arab world. Certain Gulf countries do not want to see women sharing equality with men in a Muslim country (nearly half the Parliament is women). And certain thugs associated with dictatorship would like to grab back power and bring back the dictator. This budding democracy must be defended, tooth and nail.

Although much work remains to be done, a festive mood is in the air and it is the holidays. The Transition Period has come to an end and Tunisians can celebrate the New Year with hope.

May you have a peaceful and joyous Holiday Season.

We hear very little here about what's going on in your country, so it's interesting to read your updates. I hope for peace for your people, and especially for you. Best wishes for a happy Christmas.

change happens a little bit at a time. sounds like your country is headed in the right direction. wishing you a joyful holiday and peaceful days.

I so appreciate hearing what is going on and how your country is struggling and gaining the fight for democracy. Over here so few understand how important that is. I fear we are headed into a dictatorial era, as I watch our independence and freedoms being taken away. Prayers for peace and solace to you, family and country. Merry Christmas

I heard about the election outcome on the news here in Sydney, Australia and was very please that the election went relatively smoothly. I hope you and your loved ones have a peaceful and happy holiday season.

I hope for you and Tunesia that things will go forward to a true democratie there !!!
Wish you and your loved one(s) some happy bright days and all the best for the new year Nadia !

Mabrouk Nadia! Tunisia is an inspiration for Libyans who would like to see the same thing happen here. May your future be peaceful! Happy holidays.

May that promise in the bud, burst into glad and joyous bloom in the coming days.
Holiday blessings to you.

Nadia, your blog is really fascinating, and your textile art, paintings, and sketches are outstanding ! Many best wishes for a new beginning of peace in Tunisia !
Marina and Daryl at Quilt Inspiration

Haven't heard a thing in the news here about Tunisia or anything happening there at all. Hope that all goes well and that there will be no more deaths and that political stability will be reached. Have a Merry Christmas.

this is such good news Nadia!