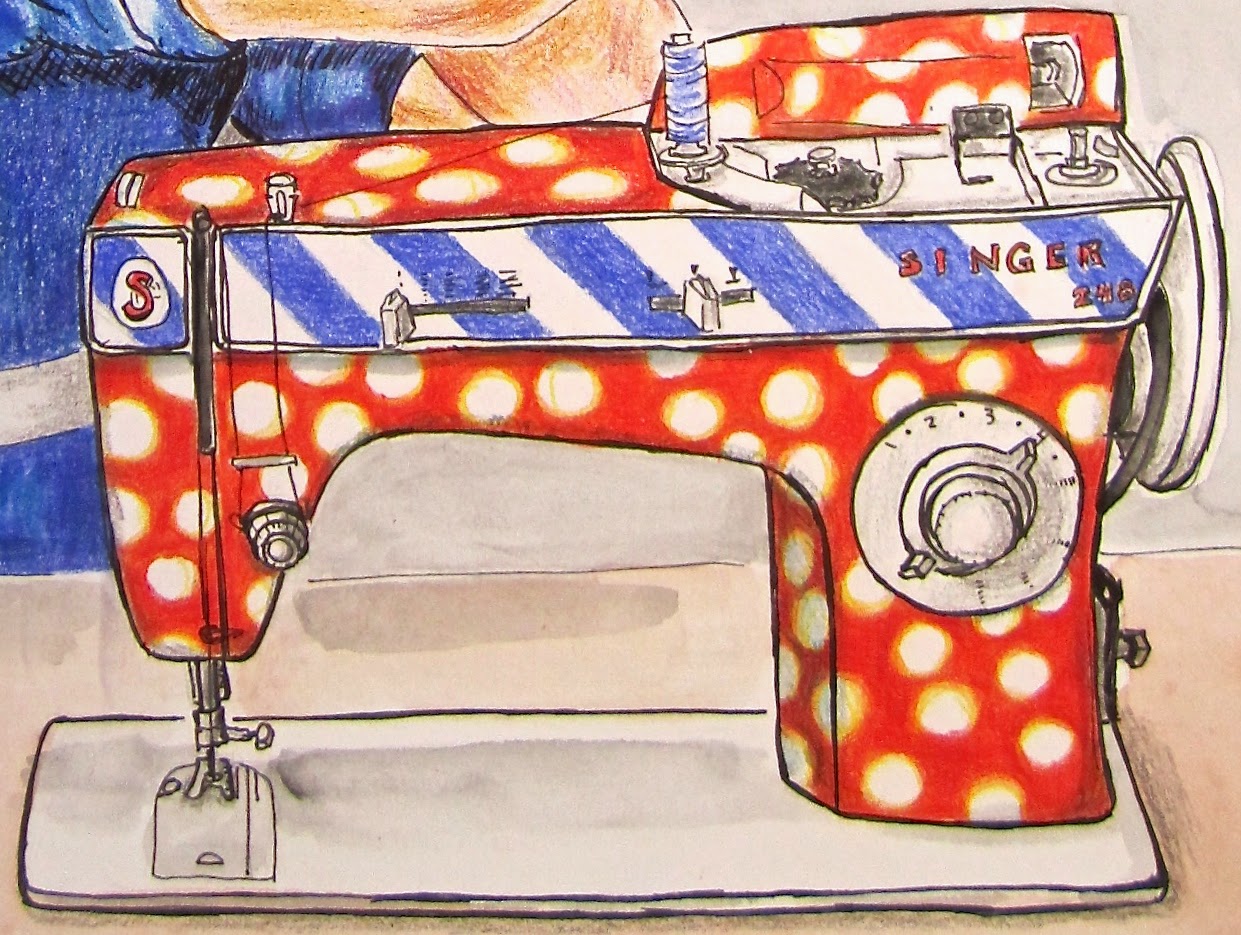 I dressed up my sewing machine a bit in honor of Rosie, who has been on my mind recently. 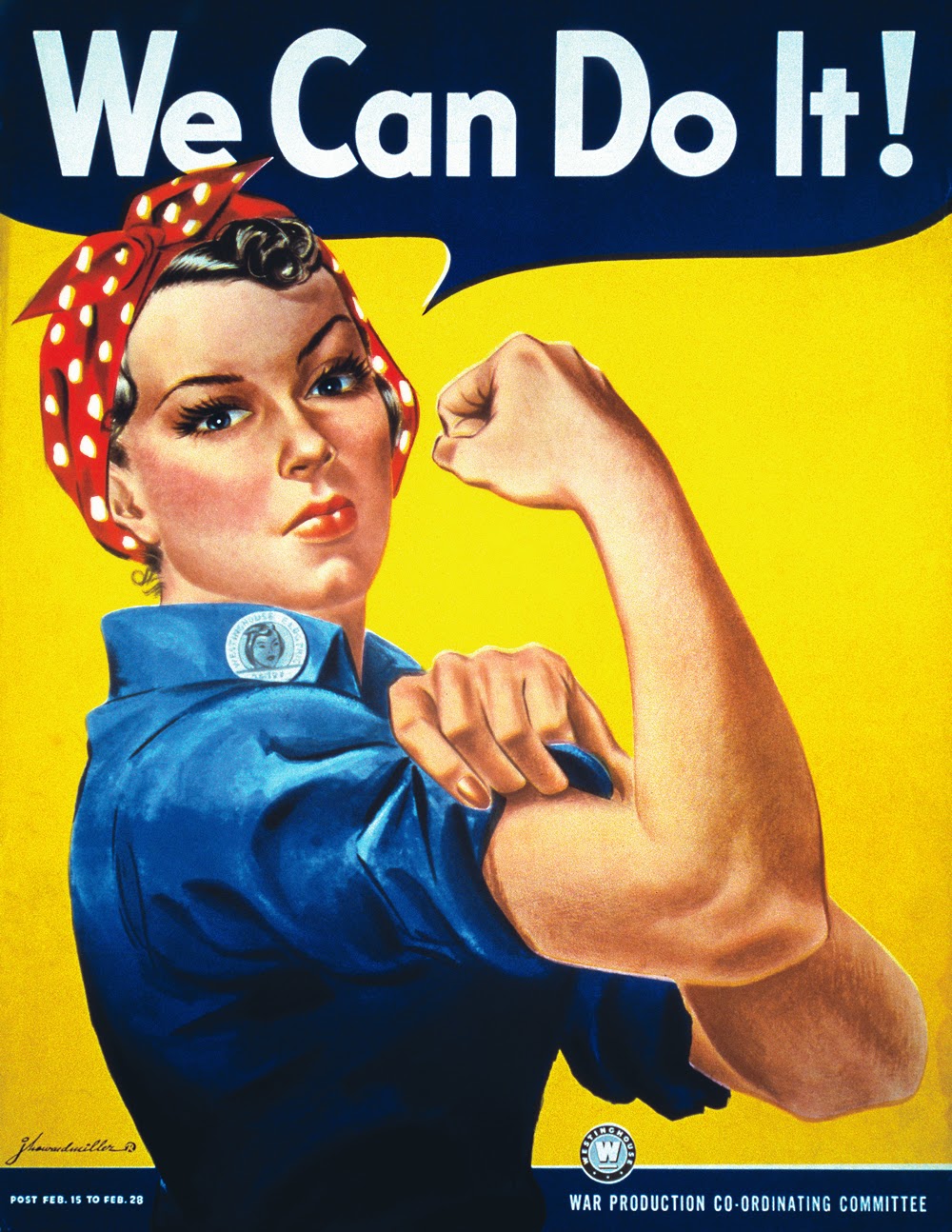 For those unfamiliar with that World War II poster girl icon, Rosie the Riveter, here's the original image by J. Howard Miller. This poster was used to persuade 6 million women to go to work in the armament and aviation industries when men marched off to war. The patriotic red, white, and blue tells the viewer to serve the country in its time of need. It was a very successful propaganda campaign indeed.


Rosie's image seems to appear frequently these days and came to mind when I wanted to express an idea about my sewing machine that had nagged at me for awhile. And so, Tessie the Tailor, Rosie's sister, came into existence. 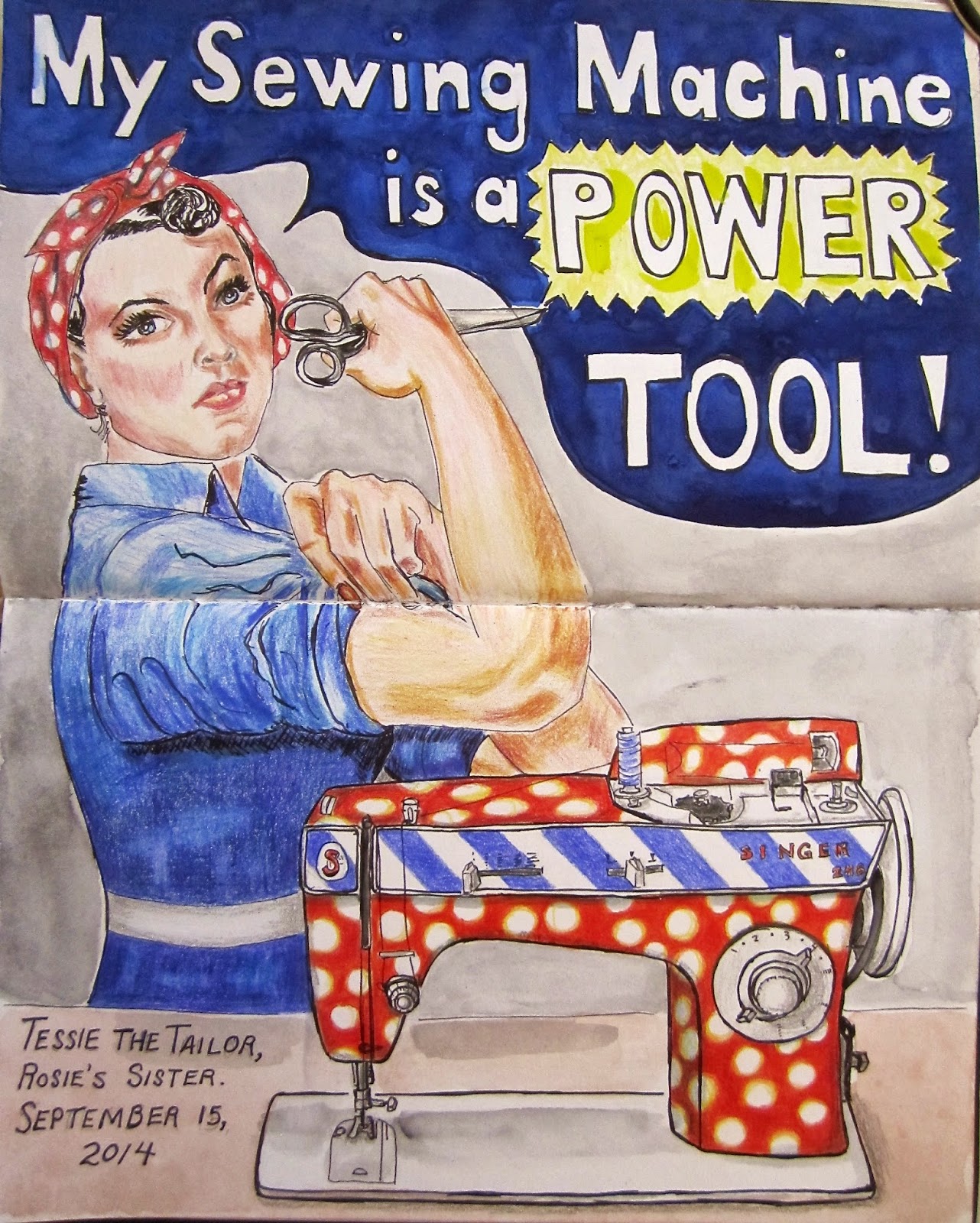 Having a professional interest in the representations of women in the media, I found myself reflecting on the image and analyzing it as I drew. The point of the Rosie image was, of course, to convince women that they were strong enough to do a man's job (as if they didn't have enough to do already). In fact, it is a masculinized image. I found it interesting to examine the feminine features as compared to the masculine features of Rosie.

First of all, what's in a name? The name contains the hard consonants of R, S, and T that suggest masculinity while the "ie" of Rosie brings it back towards the feminine. However, "the Riveter" carries strong connotations of masculinity. Consider other aspects of the image:

At this point, the scales tip toward the masculine and one may wonder whether Rosie was a man or a woman. It's not that women don't have traits listed on the masculine side. There are women with strong chins and square jaws, like me, for example. However, the sum of the male traits gives an overwhelming impression of masculinity.

In addition, the power establishment was only letting women into the work force as lowly workers. There is no suggestion of possible promotions, career, or any sort of professional aspirations. Women were going to give a hand--temporarily.

Obviously, the artist was a male and, consciously or unconsciously, created an image that told women they had to be more than they were; to be a woman was inadequate. Looking around at representations of women in the media today, I'm not sure we've made much progress. We must remain vigilant.


Come to think of it, I'm not sure I want Tessie the Tailor
representing MY sewing machine at all!
Labels: sketchbook

i have that poster, and you've really opened my eyes to it now! wow.

Great insight Nadia. I never would have thought it out like you did.

Douja and I will be using this in the classroom--for sure!

Hi Nadia, Funny you should post about Rosie the Riveter. I am working on a project called "Out of Habit" which deals with nuns, Mary and women's rights. The research has been fascinating and eye opening. "You've come long way baby" is another form of propaganda as is the "strong women" seen in the media (most who are dress provocatively and seem lost to me). Yes, we must remain vigilant.
xo Carole

Nadia, Good eye! Thanks for a very interesting and thought-provoking post. I particularly like a couple of your points:

I have seen the poster all my long life, and it has always rubbed me the wrong way. I think this statement expresses why: The image “told women they had to be more than they were; to be a woman was inadequate.” Yes, that’s exactly what the poster tries to say. The fact that 6 million women went to work in factories was not because the poster was persuasive; it was because 6 million women need to earn money.

And as for your own drawing, I especially like the sewing machine. I am fascinated by art depicting the inherent visual power of household tools and appliances. You are right; a sewing machine stands on its own, doesn't need the help of any masculinized image.

My husband must have seen that poster some time in the past ... he is always bringing me jars to open.

Excellent and VERY informative post nadia! Just what we have come to expect from you!

Very interesting - I've never really broken this picture down before. It's one of my daughter's favorites. I'll have to tell her about your post. I do like the way the sewing machine looks - very snazzy.

Interesting... I would add to the male column - that she is turned away from the camera.

Yours becomes downright frightful with those scissors in her hands!!
But I like the idea of exploring the stereotype, re-expressing a female icon in terms that are more personal...