My daughter and her family went for ten days to Egypt to visit family. [That's not the News Flash.] They came back Saturday the 29th. We were uneasy. It was close. She told a harrowing story.

Extreme gasoline shortages plague Cairo, which meant hours spent in long lines in the hopes of finding gas once at the pump. To make matters worse, some areas in Egypt experience several hours of electrical power outages every day, to say nothing of the high unemployment and a disintegrating economy.

Therefore, because of severe mismanagement of the Egyptian government by the current ruling religious party, massive demonstrations were called for June 30th, the one-year anniversary of the first elected president. Protesters hope to "persuade" the President and his cabinet to step down. Preparations  near Tahrir Square a few days ago: 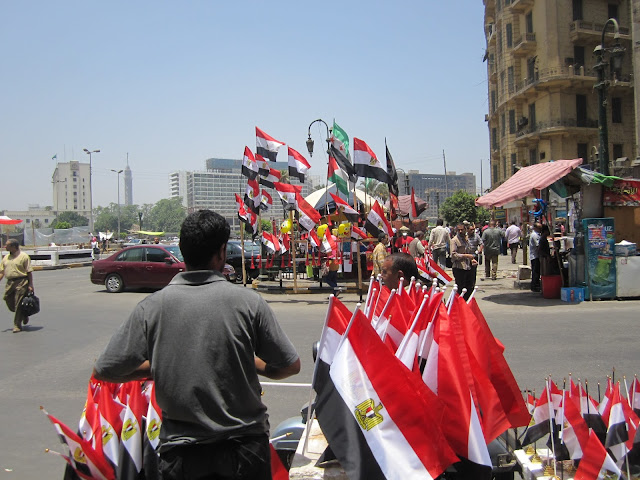 Interesting graffiti covers walls in the region of Tahrir Square (where the Revolution took place two years ago) in central Cairo. 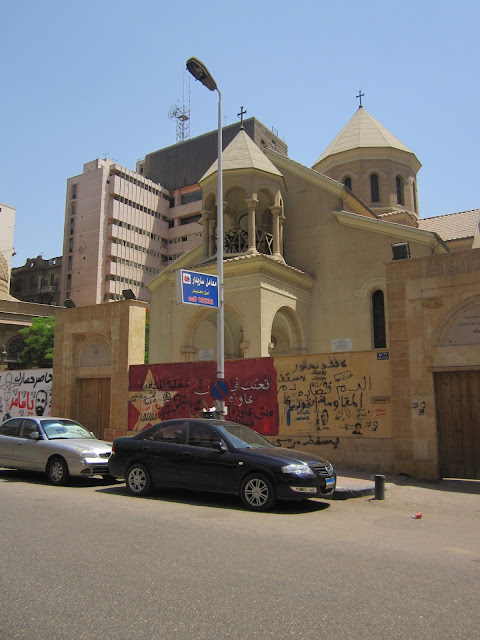 "No to the Constitution," "Bloodshed brings bloodshed,"
"Down with Morsi [the president]."
Grafitti also covers the blockades near the presidential palace. 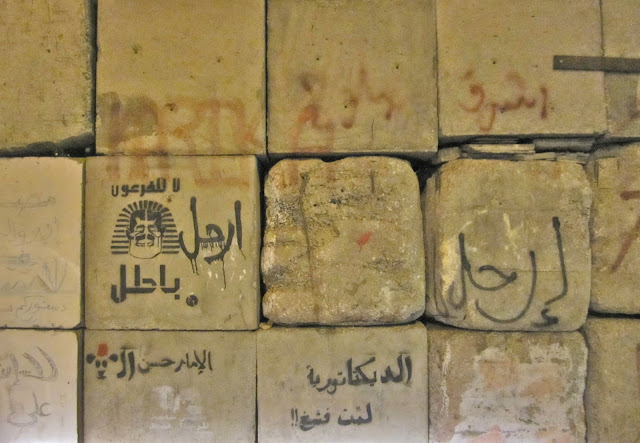 "No to the pharoah [who is]unjust--leave." "Dictatorship leads to disaster." 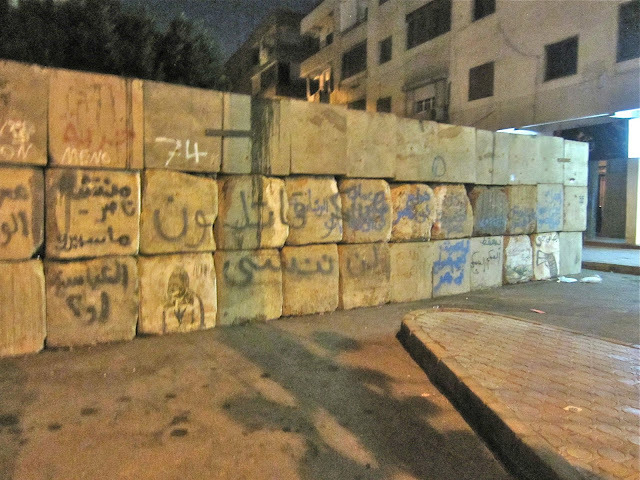 You get the point. People started rallying several days early and by the 29th, hundreds of thousands of people were out in the streets. My daughter got to the airport early and said it was like a war zone. Military personnel were everywhere and panicked people were trying to get away before the chaos set in.

Today's demonstrations remain peaceful, however, there appears to be at least one pro-government rally. The Tunisian news is following events closely to see how far they will go. A question hangs in the air: Will Tunisians answer the call to throw off an incompetent and illegitimate government?
Labels: Egypt, Tunisia

glad your daughter and her family made it out safely. Egypt is such a mess - I don't know how any government can make it work. So much of the economy depends on tourism and I don't see that rebounding anytime soon. I was going to add so much more, but really, it is just a mess... hope it stays calm in Tunisia.

i've been following the demonstrations on the news. glad your daughter is safe.

Good Lord...I think of you often and the crazy world we live in. The slender thread of life. Happy for the safety of your daughter...

What a mess! The whole world has gone crazy.
Thank God for your daughter and her family's safe trip. We must continue to pray for peace in this world.

It is difficult to imagine while living in such a safe place as Japan. Governments everywhere are filled with people on their own agenda but when it has such a negative impact on those just trying to live their everyday lives there is so little we can do but pray for the safety of the citizens. Glad your daughter returned safely'

I am relieved to know your daughter is back unharmed. Stay safe, Nadia. I am grateful for your clear-eyed reportage.
-sus

It is so frightening to think of what could happen and how the violence could explode and escalate.

All this uncertainty is so sad! Glad your daughter made it home safely!!!!

So glad your daughter is safe! It's worrying when you cut it so close. xx

Much to consider in potential relationships between changes in Egypt and Tunisia. . . . I also love collecting pictures of graffiti. I think there is a graffiti-esque element to your political art quilts.

Scary times in the Middle East. Glad your daughter made it back in the nick of time and you all are safe and sound!!

It is interesting to read your updates, thanks for sharing!!