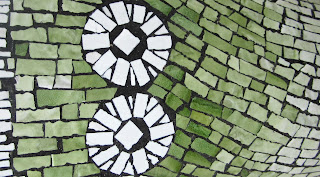 Since summer heat was not conducive to mosaicking (no air conditioner by my work table), it was time to finish a few plant containers. Here are two pots made from 3-liter olive oil cans. 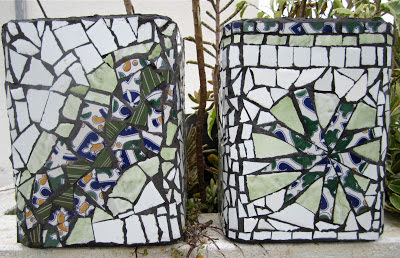 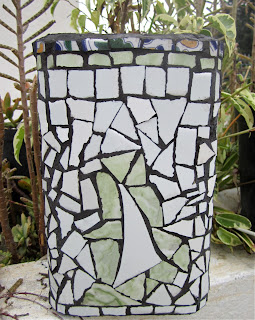 The sides of the container on the right have wing motifs suggested by broken tiles and in line with the wing theme inspiring two stitching projects on which I'm currently working. 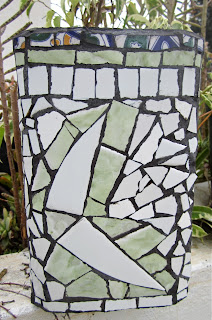 They will sit in the wall spaces around the patios.

An aside. A fair number of rocks and stones can be found out in the fields so I collect the bigger rocks into piles and my husband occasionally remembers to bring them home on the tractor. Recently, he said peevishly, "I see you haven’t used the rocks I brought you."  Ok,  ok. 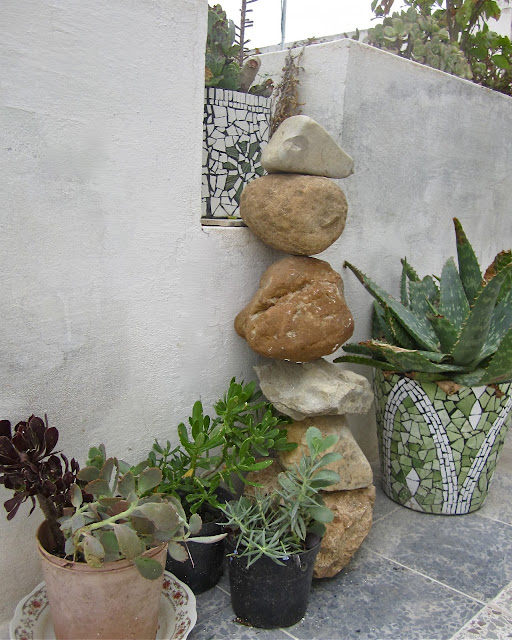 I now have a rock pile sculpture on the kitchen veranda, unscathed by the big hailstorm. And two new containers grace the stairs to the roof. The lineup: 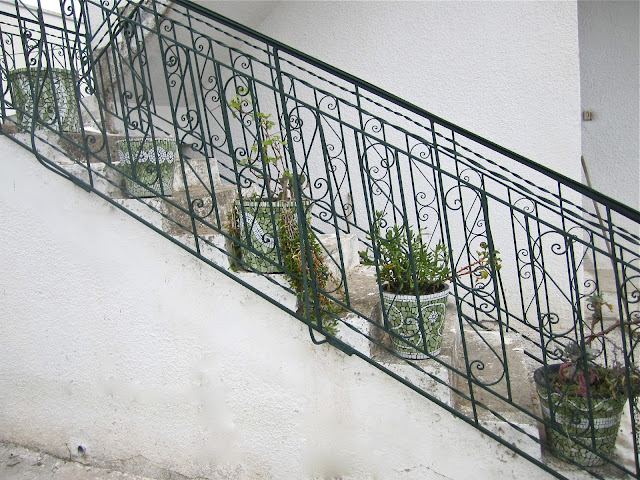 The first one sports a band of circles and a top border of tiny pieces. 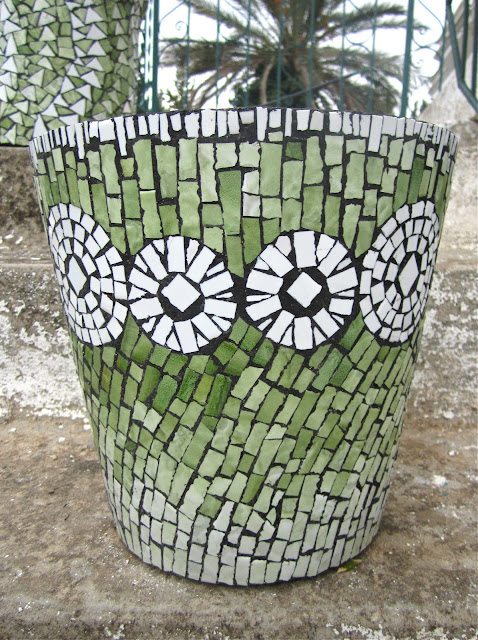 The design for the next container started as (wild) flying geese, however, the wing theme inspired me to add extra triangles to create a flurry of wings. 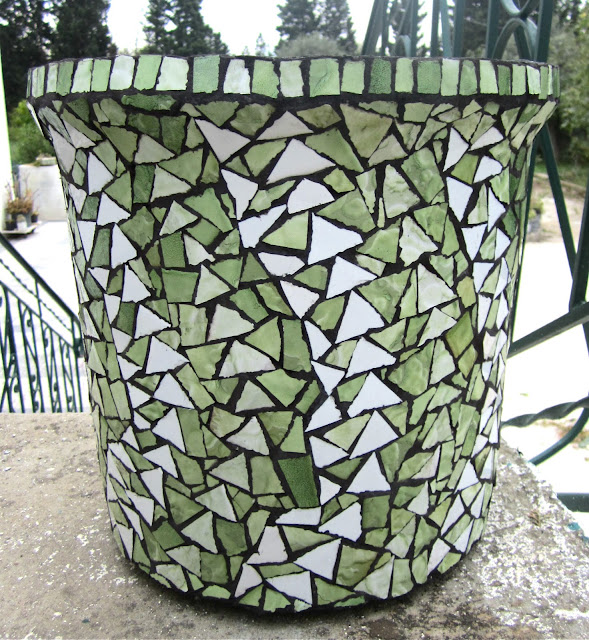 A flying geese design in light green echoes the white wings. At least the mosaic containers stood up to the hailstorm and I suppose my poor ragged plants will manage to revive with the pleasant autumn weather. Now I better get to planting the new additions.

And Best Wishes to all celebrating Aïd.

News Update: The Tunisian government is now officially in limbo although it continues to function. The Constitutional Assembly's mandate ended on October 22. They had one year to write a constitution (which they could have accomplished in four to six months), but, they have as yet to produce a final document. It appears they appreciate their hefty salaries. The ruling religious party claims legitimacy because they were elected. Voters say they voted for a group of people to write a constitution within a year. Elections have been proposed for June 2013, however, who will organize (and control) that process remains unclear. So far protests and demonstrations have been peaceful, with the exception of the lynching of the leader of the Tataouine Nida Tounes Party (an opposition party) on October 18th by ruling party demonstrators. An unheard of horror that provoked anger among Tunisians, especially since nobody has been arrested despite a large number of witnesses. In any case, nobody wants a vacuum in power, which could lead to a civil war. And so the lid remains on and things are contained...for the moment.
Labels: garden, mosaic plant containers, Tunisia

Good Lord on the government...unbelievable...thx for update. As for the mosaic..I really really love your mosaic. I have put doing mosaic on my Bucket List!! I guess I had better hurry as age is upon me:) And ha ha on the peevishly..Take care..

beautiful mosaic work and amazing rock sculpture. wishing for a peaceful resolution in your part of the world.

I just love your new mosaic pots, you are inspiring me to get back to doing this again. Love the green and white.

Sorry things are going rough over there, hope you stay safe.

Love the new planters. Hope the political scene doesn't affect you much in your daily life. Despite all my recent ranting about our upcoming election, the fact remains that I will let myself have a good life whatever the political circumstances.

Love, love, love your mosaic work! Be safe and well.

Your pots are so pretty individually and seeing them in place and all together makes them even more beautiful. Lovely work, just lovely. Thanks for the update on the government.

your pots amaze me~!~they are so beautiful and apparently quite sturdy. they look wonderful lining your stairs.

to hear about what is happening in Tunisia is very interesting . . .
i worry for your safety.
in the U.S. we are getting ready for elections and very few of us realize just how lucky we are to live in a country that does not have the same level of corruption and violence that remains in many other countrys . . . i'm quite certain that our government does have way too much corruption but so far, it hasn't risen to these levels. and i am grateful.

thank you for sharing your news and your beautiful mosaiced pots. i enjoyed reading this post.

These new green & white pieces are wonderful! Colors of growth and purity...supporting living plants :) May the country show as much peaceful growth as your patio. Check out #21 (and others!)
http://www.springzaad.nl/inspirationalsuitcase.php
Please take care.

These circle bands are gorgeous. Like sun symbols or wheels, they add something dynamic to your mosaics. And most of all, I love the multicolor streams across the oil can planters!

The mosaics are so beautiful -- the fact that you can create such magnificent art in the midst of such horrific turmoil is a testament to your incredible spirit. I think of you often, and I say a prayer for you whenever I can. May peace and stability find their way into your corner of the world.

Nadia, the mosaic posts are all beautiful. I love how you used the green and white tiles for them. I love staircase and this one is so inviting. Wishing you the best outcomes for Tunisia - Hugs Nat

Your mosaic work is awesome! Sorry to see that there is unrest where you live. It seems to be everywhere these days. But keeping creative brings a sense of peace and helps us not to focus on things we can't control. My prayers are with you and yours. Stay safe.

Your planters are lovely and look fabulous adorning the staircase. I hope things settle down soon in Tunisia without any more bloodshed - turmoil everywhere - when will the human race learn?

see you get tons of comments but i'm commenting anyhow :) i like those green/white/black tile pieces...wonderful work!

lovely containers, Nadia, and the stack of rocks... wow! Take good care of yourself and your family. xxoo, sus

The pots look fabulous. Tunisia seems a heck of a lot more stable than it is here. Let's hope for the best. (or bury ourselves in projects and pretend none of the mess is there).

hey nadia , beautiful mosaics,but what terrible hailstones,- definately- make a pink book-I can email you instructions if you like love tina

I love the mosaics you make, the pots look fantastic! The stones look great, but unstable (bit like your country?). xx

Your mosaics are amazing, a real bright spot in an otherwise depressing situation. Keep positive!

Hello Nadia,
Your mosaics are great and you'd created a stones sculpture -you are very creative-. The final look is wonderful.
May God keep you safe in the midst of the uncertainty of the political situation.

I get myself lost in the amazing design of your mosaics. I love the pots, they would look great also in an interior.

Finally catching up on my blog reading, I'm so way behind on everything these days. I've enjoyed your past several posts, your reverse and needleturn applique pieces are quite remarkable, you do some beautiful work with such tiny pieces of fabric. Loved seeing your garden, sorry to hear about the hailstorm damage, hope things are startiing to come right again. The mosiac pieces are delightful as ever, love the look of the pots on the staircase up to the roof. So good to catch up with you, always enjoy reading your blog posts, not so good news on the political front, there is always uncertainty whether a gvt is stable or otherwise!

They are so beautiful! are you selling them?

For the time being, I haven't found a way to sell them and get enough money for the time it takes to do the mosaics. In any case, my garden can use a lot more of them.

and keep safe...we hope the best for Tunisia

I am in love with your garden. These mosaics are amazing, such a departure from working in fabric. Both stunning. And thanks again for sharing what's going on in the politics of your world. Always eye opening to come here.

Your pots are really wonderful!

Dear Nadia,
Your latest mosaic creations are amazing and so beautiful! I am in love with the different shades of green with white and the unusual patterns you have created!.
I am so sorry to read of all the unrest in Tunisia, my heart goes out to its people!
Be safe and thank you for sharing all the positive inspirations!

Your mosaics are so wonderful. So full of movement and elegant in just greens and white. I love your rock sculpture too.

I love the mosaics! What a wonderful way to recycle olive oil tins!

I pray Tunisia sorts itself out. Libya not doing much better!