"Extreme" seems to be the word of the day. Yet, sometimes things work out the way they should. Fortunately, my garden took center stage last week, even though it was gasping, because Friday night a hail storm that lasted at least 20 minutes with hurricane-force winds beat it up. Every tree is moping, especially the fig trees that usually sport gloriously huge leaves, which are now shredded. The citrus crop, which begins to ripen at the end of October, is mostly on the ground. It was in the high 80°s, low 90°s during the day and here’s what we found outside the kitchen door after the storm in the evening: 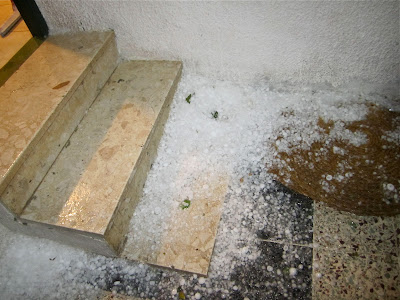 The hail measured about an inch across (2-3 cm). Several inches piled up like drifts of snow. 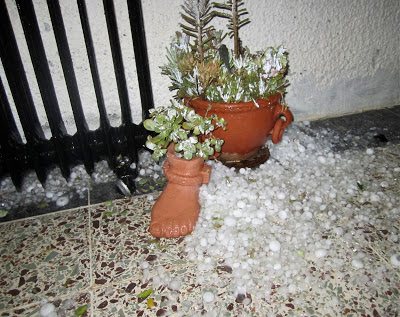 Just another example of the extreme forms of weather facing humanity. Guess we better get used to it.

On a more cheerful note and with cheerful colors, I turn to my favorite subject of needleturn appliqué. Many years ago, I tested out some easy ins-and-outs in "Etudes" (Studies), seen here, and then played with more complex improvisations. Improvisation I  (Jan. 1992, 31” x 30”/77cmx79cm), which you might recognize as the side frame of my blog, suggested the possibilities of complicated structures that resemble mazes, although it is machine appliqué and not needleturn.
It was made from the small scraps of a bigger project.
The following piece, Improvisation II: Où sont les tigres? Où sont les Hommes? (Where are the Tigers? Where are the Men? March 1993, 41.5"x36.5"/1m06x93cm) contains a few bits of tiger/zebra stripe fabric in the pieced background.
Tigers are an endangered species, and Men? Living in a country with a dictatorial regime led me to wonder how much people could take and what had happened to the Men who would stand up to its violence. The viewer can find the tiger fabric, but the Men?
And yet, this piece makes me very happy. My needleturn technique converged with subject matter and color taking me along a path to my own visual language. I'm glad to have had a reason to revisit it.
I end with a piece in the "early extreme" style--a study in forms. 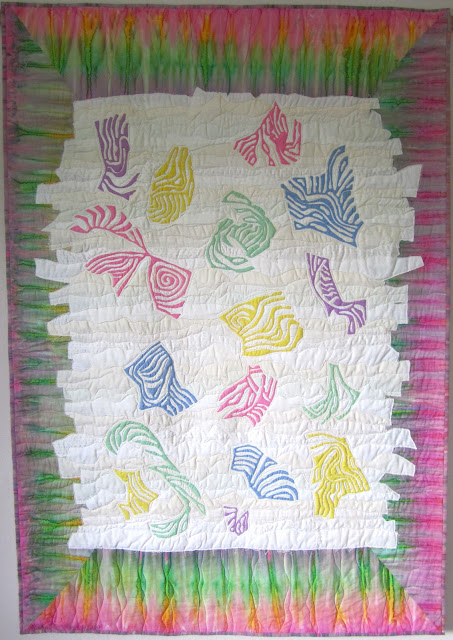 Improvisation VI: Bonheur et bonne humeur (Happiness and Good Humor, June 2000, 44"x63") is a cheerful exploration of the possibilities of needleturn without a maze, just one color at a time. The background provides contrast thanks to its white layered, raw-edged cottons and uneven side edges. 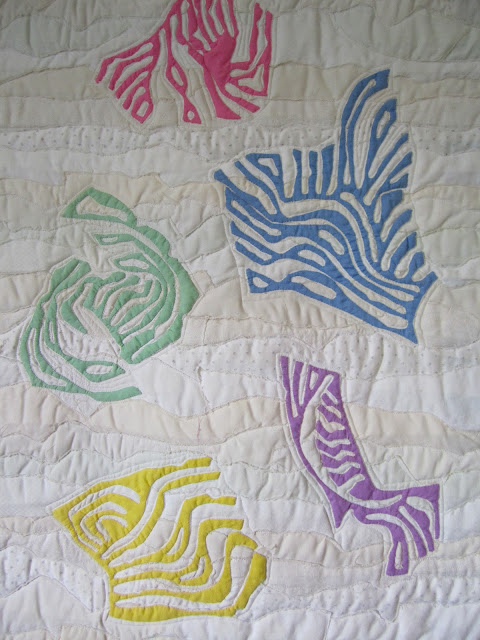 However, the background now seems a bit empty. I'm tempted to come back to this piece to add stitching. The border, a commercial fabric, could use some, too. I think I'll add it to my l-o-n-g list of works-in-progress.
Labels: Art quilts, garden

amazing what the weather can do to a beautiful garden. your needle turned applique is amazing. i've done it in the past but wouldn't have the patience to do the beautiful, intricate patterns you've done here.

The work is so amazing, what a commitment to stitch! So sorry about your garden, I know I'd feel devastated were it mine. Be well.

Very Matisse-ian...do you think it also has echoes of NW native work at all? Gad the hail...are yoou guys safe in the political storms as well as the hailstorms?? xo

I find your work in this section of the blog fascinating and intricate. Really nice work. Thanks for sharing.

Sorry about the hail too. My garden isn't looking very well this year either :(

From someone who has tried needle-turn applique without much success, I find your work to be phenomenal! I especially love "Where Are the Tigers?"
Do you ever enter shows?

I definitely agree and know what you mean about the word Extreme! thanks so much for sharing your work! Its great!

So sorry about the hail and your garden. Extreme weather seems to be the new norm. Your applique is exquisite. I don't think it will ever become part of my repertoire. As another poster wrote, hope you are weathering the political storms as well.

What a wonderful work! I love the shapes and colors, they remind me of modern art at its best, Frank Stella and related. Really amazing.

You have such a unique style to your work. I enjoy it viewing it.

Oh my gosh on both parts the guilt and the hail, OH MY!!

Wow! These are EXTREMELY unique and exciting. To think of a dainty little craft like needleturn appliqué to turn into this!

that must have been some storm~!
it's sad that your garden suffered so much damage.

your Improvisations series is really interesting. it's abstractness makes it hard to stop looking at it as each time one sees something new.

i LOVE your Happiness and Good Humor" piece~!
i have a very long list of wip's too. i continue to try to shorten it and i'm making only minimal progress. i find that events and occasions tend to slow me down as there is always something that must be made for someone by a certain time. oh well, i have lots of fun trying.

I have a feeling we are in for a cold winter this year. I've noticed an increase in the number of spiders, ants, and geckos and we're fighting mice in our garage (so far they haven't ventured into the house!).

I found this book and thought of you: http://englishtips.org/1150865150-the-complete-fabric-artists-workshop-exploring.html

I think your quilts are exciting. I like how you incorporated the design into your blog too.

Your work is extraordinary and I have long loved your blog. I am so delighted you visited mine and left a comment since I lost my blog list gadget last year and lost track of your address. Now, I can once more add you in and dream of all of these amazing creative opportunities you inspire, once again!

wow! it's interesting to me how you are exploring a style and shape and that it translates well to machine and hand work. The tiger quilt is truly gorgeous!!! I don't find the background 'a bit empty' on the last-offered piece - at all... I like the way the appliqued colors 'write' on the 'page' of the plain white background (which, of course, isn't plain at all, but full of subtle variations).