For sundry administrative reasons, my U.S. driver's license expired and I couldn't renew it without being in the States in person and I have been unable to travel. So I decided to go for a Tunisian driver's license. Easier said than done.
After passing the written test second time 'round, I discovered that lessons at a driving school are necessary (at about $20/hr) because you need to be in a special car equipped with the pedals on the right side as well as the left to take the test (only stick shift, mind you), and you need to practice in the area where the driving test is given--with an instructor (the system of a learner's permit does not exist). 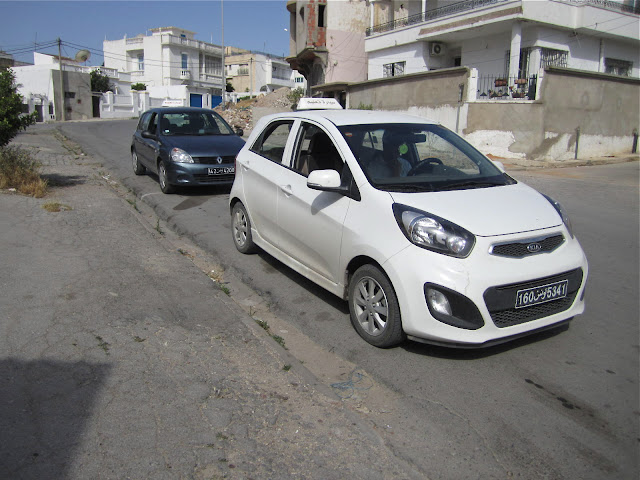 Ultimately, this creates employment. There are 3000 auto-écoles (driving schools) in Tunisia. The cute white KIA that I drove was brand new. Another student took the test first and told me afterwards that he was so nervous his legs trembled the whole time. He flunked right away, missed a priority on the right. Easily done as the area is mostly residential with narrow streets, lots of blind corners, few road signs, low hills, and a couple of busy and tricky intersections. There was a long line-up of waiting auto-école cars, which are always recognizable by the white sign with red writing on top. 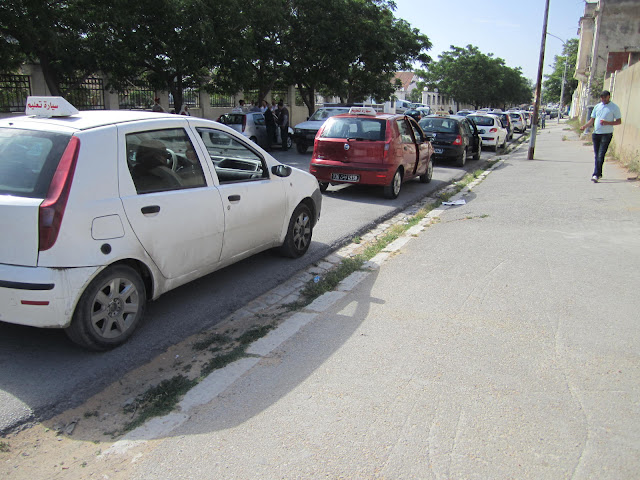 In the future, I will be more patient with these cars when driving, knowing that the students will suffer greatly. I felt like I was 16 again (not a pleasant feeling) and had nightmares about cars and inspectors the night before. 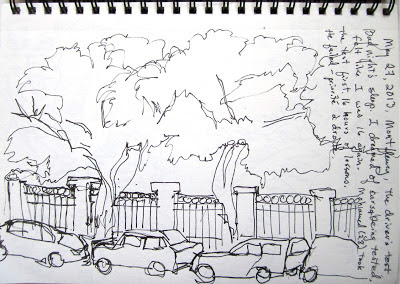 While waiting in line, I pulled out my sketchbook (hardly the place to haul out your stitching).

Rather full of anxiety. 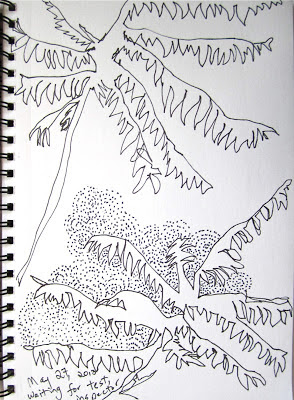 During the test, the driving instructor sat in back--I suppose this is a policy to stop corruption. I showed the inspector my ID before we got underway and joked about my American driver's license, which was visible in my wallet. I also played up the fact that I had a loved one who had been in the hospital and I might need to be able to get to the hospital again under dire circumstances--I milked it for what it was worth. One must be tactical in situations like this.

We got underway and as the inspector gave directions to drive we chatted, about dogs of all things, and I could tell he was giving me all the easy turns. After about 10 minutes he said to stop and he signed my papers and congratulated me. Afterwards, my driving instructor said that the inspector was always very nasty and that I was very lucky. I could see how the inspector could increase the difficulty of the test. Personally, I think I charmed him with my white hair and US nationality. I bet the woe-is-me story helped as well. In any case, I was thankful.

My husband says I'm the only person he knows who has taken the driving test just once--and he knows a lot of people. Before the test, he told me he would get me a present if I passed, something that I desired. 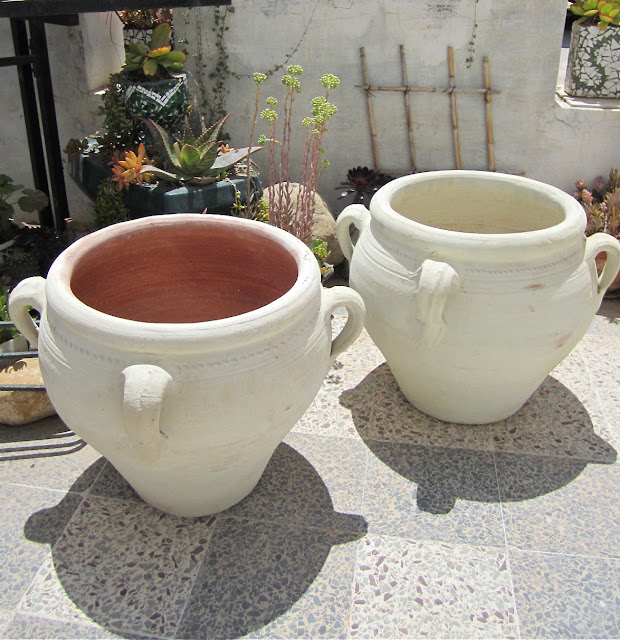 Yup, a couple of big pots to mosaic.

And driving, dear readers, is one of the reasons that I have had trouble keeping up with blogging. I was jumping through hoops.

Congratulations on getting your licence! It's interesting to hear about the different customs in other countries.

Congrats, especially on getting your license in one go. I had to take mine twice when I was 16 and living in Hollywood, CA. My mother made me so nervous on the way there that I flunked. I think my grandmother took me the second time. Anyhow, Nadia, drive on (and safely)!

So glad to see you here today. I was a little anxious since there has been so much tension there.
Hip- Hip- hooray fo getting through the hoops. Love the pots.

So glad you got through it. It's hard being without wheels to get around.

What a trip (pun intended)! When I took my driver's exam in Oregon 3 years ago, there was a non-English speaker in the office, and she was having great difficulty just understanding the English language. I've been too poor in the past to afford a car, registration, insurance, gas, etc too. Being able to drive is certainly something I don't take for granted. I'm glad you are able to drive there, as it is a huge deal!

Congratulations, Nadia, I am hapy with you! What, you have white hair? Is that colour or age. Mine is age! And I imagine you as a young person, tell me that you are!

Good job! These days I have to take the test designed for AGED drivers.Also it has to be taken in a strange car, and at five-year intervals. Yes, and we,too, have to pay the school fee.

That you have white hair is oh, so much more interesting than your driving test...lol...anyway, I am glad that you are legal driving..that is a good thing. And, I am glad that your man followed thru on your gift...happy mosaic..ing.

Congratulations, one less worry for you!

This proves it: you're never too old to feel 16! Congratulations!

Great story and I'm glad you passed on your first try. I love your sketches and your new pots. Can't walt to see how you transform them with mosaics.

I loved this story!! Good to have your lovely posts coming again. So nice to be all with that driving test stuff! Well done!

After I read the first paragraph I knew that this was going to be interestingLOL!!!! Sounds as if you were very lucky indeed getting our licence first go!!! I was sure that there'd be hoops galore to be encountered!!!!! Like some mad comedic movie, all designed to be as frustrating and bureaucratic as possible!!!!! I think you got away lightly!!!!! Good for you! Love the large pots, look forward to seeing how you decorate them!!!!

Nadia, I love your writing style. The story of your triumph makes me smile! congratulations, sus

A very charming post. I have an American friend who went for the Italian driving license thinking that the test would be very easy because seeing how Italians drive she thought there weren't many rules to learn!

Congrats on getting your license. I did get one in Italy before. It was different from getting one in the States, however, not near as different as your experience. I think that was wise/clever to give him good reasons to pass you.

Congratulations, indeed! You reminded me of the problems getting a li science in France... Very expensive and difficult. Good to see what you have been up to, my dear. I am getting a hip replacement which will improve my life and make everything easier! Also am teaching students from the art school how to dye. Interesting summer.

Well done! I'm sure your charm and your driving skills made his day. Can you imagine taking people out for tests all day long and how stressful that must be!!!
Great present from your husband. Take care. xo Carole

Good for you, Nadia! Favor, for whatever reason, is always a good thing.

Life is always an adventure. I love you sob story to gain favor with the testing authority. My husband does that all the time to get what he wants, which is usually a discount when he is buying something.
Congrats on passing on your first try!