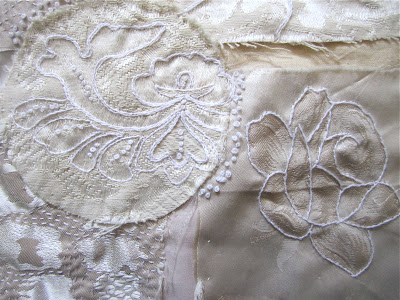 After the January 2011 Revolution, a transitional government of technocrats was created under Beji Caïd-Essebsi (BCE). This government managed to stabilize the country and organize elections for a constitutional assembly efficiently and rapidly in October 2011. Order prevailed. As in my current work-in-progress, one could see established structures (in my case, squares and circles, a nine-patch) still in place, 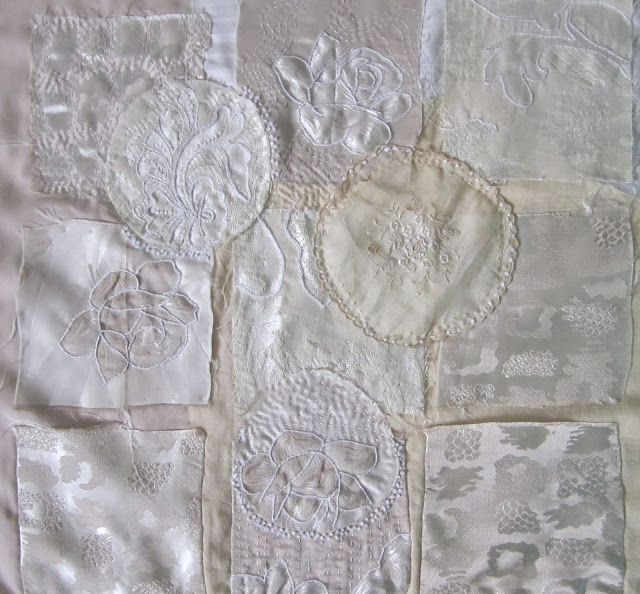 if a bit frayed around the edges.
The Constitutional Assembly had a one-year mandate that ended in October 2012. It has finally produced the rough draft for a constitution…a very rough draft. Called "The Best Constitution in the World" by the president of the Constitutional Assembly, others have openly called it "The Constitution of Shame." The problem : the separation of State and religion is threatened. It confirms Islam as the religion of Tunisian society, which was in the old constitution. However, it names Islam as the religion of the State, which would allow for the ruling religious party to bring back the subject of the Shariâa (religious law). 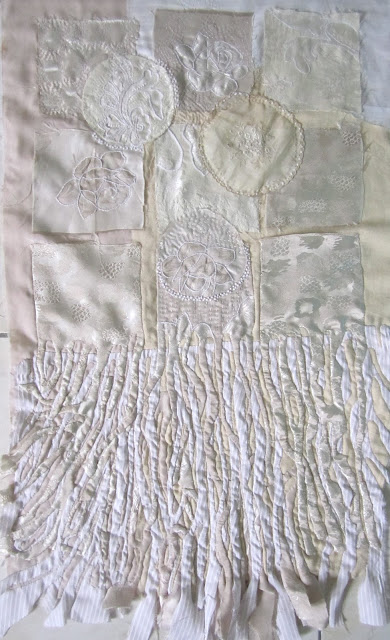 In addition, no mention of international agreements such as the Universal Declaration of Human Rights is made, and there exists no mention of freedom of thought and freedom of conscience, which are necessary in a democracy. And it proposes a regime heavily weighted toward a Parliamentary structure that would allow theocratic dictatorship and therefore a return to a repressive regime. During the revolution, we saw slogans for political and social change that had nothing to do with religion. The Constitutional Assembly has not listened to the Tunisian people and does not provide any sort of improved document. Experts maintain this is a step backwards. It would appear, then, that things are becoming more and more entangled, disintegrated, eroded.

The subject of elections remains unarticulated. Yet, a glimmer of hope appeared last night when BCE declared that he would be a candidate for the presidency. At 86, this prestigious lawyer and nationalist hardly needs to seek glory and may be the only person who can garner a majority of votes and save the country. The glimmer is only that, however. The TV program was jammed at the scheduled time and had to be aired later--shades of dictatorship and censorship. The rough draft of the constitution would put a maximum age of 75 for the position of President of the Republic, a thinly-veiled manoeuver to exclude BCE by the ruling religious party. 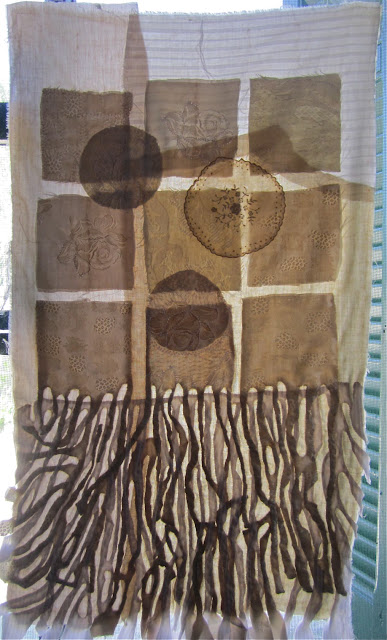 And as expected, scandals continue to rock the government. The most recent: Sixty-seven delegates to the Constitutional Assembly have received double paychecks because they have other positions as government employees, as well as four ministers. Additionally, yesterday was the final date for ministers to provide a complete financial statement that includes all assets. How many will comply?

Indeed, when held up to the light for scrutiny, Tunisian politics look more and more entangled.

I am so sorry Nadia. It seems to be much the same all over the world. We are in times of great disintegration of liberties fought for and won with blood and tears. Apparently this current generation, never having known repression, will have to taste of it for themselves. May God have mercy upon us all!

Oh Nadia, that doesn't look good at all ! And here of course I mean the political situation ....
How well you compare politics with the (beautiful) entangled part of your white "What-if" piece !!!!!!!!
(Hope things will turn out much better than is to be forseen right now ....!)

I choose to bury my head below ground when it comes to politics, but you have made me peek up. I imagined you reading your words as we saw slow dissolves of your work.

You have presented a very artistic piece to show what your country faces. Sadly it is creeping, no make that leaping, to land over here. Signs of the undermining of our core beliefs are being covered by the veils of deceit. If we could open their eyes.
This piece is quite special.

All I can do is to send a hug from Charlotte to Tunisia. Hopefully there will be no..ban the books and ban the art on the farm where you live. U r using your art well, of course.

The whole world is upside down in one aspect or another. We must trust God, because He is still in control. I know to us it does not seem so, but "the earth is the Lords,the fullness thereof and they that dwell therein. Prayed for you and your family.

Tunisia is ruled by Pat Robertson's Tunisian twin and the party in charge is the Tunisian sister of the 700 Club. Good luck with that one! History reminds us that whenever the conversation revolves around God, a lot of blood is shed. This is evidenced by what happened yesterday to 2 national guards in the Tunisian border mountains. I persist: The ultimate culprit is ignorance. An introspective look into Arabo-Islamic history and knowledge(s) would help.

Oh, nadia, how dreadful for you and for Tunisia! What a backward step. Your new work is so pretty on the surface, yet so packed full of sadness and frustration! When the light shines through it, the truth is shown. Let us all pray for the light to continue to shine. God Bless, nadia! God bless you, your family and the world around us. Take care.

Your work as always is beautiful and has deep meaning, representative of how corrupt power can be when in the hands of the narrow minded, single minded, and essentially fearful individuals that seek to rule others......

Beautiful piece. I hope your country finds some compromise and clarity.

your work is beautiful. ugh re the political machinations. separation of religion and state is a good thing.

You are very brave to tackle and explain the intricacies of your politics. I feel dishearted if only I think about ours, let alone try to describe what the hell is happening here.

I admire you so, Nadia. You are indeed making something good happen. Keep telling your story.