It’s difficult to know where to begin, so many small incidents have happened, however, last Wednesday a red line was crossed and this requires a commentary.
First, I’ll back track and begin with some good news. Recent polls show that the Nida Tunis ("The Call of Tunisia") Party has pulled ahead of the ruling religious party and would win if elections should be held. In addition, the Republican Party and the Massar' Party have signed an agreement with Nida Tunis to work together, making this group the major opposition to the ruling religious party. This is reassuring as the group around Nida Tunis is made up of the top intellectuals and minds of the country.

However, as could be seen in last week’s post about the beach town of Hammamet, Tunisia’s economy is on the skids. Unemployment keeps rising and to make matters worse, the vocal extreme right has been vandalizing and burning marabout mausoleums, of which they do not approve. A marabout is a sort of holy person, a bit like a saint, and certain traditions have developed around their mausoleums that could be considered more cultural than religious. Additionally, the extreme right and the ruling religious party have made it clear that culture and the arts are not on their agenda. Artists have been threatened and attacked verbally, even physically.

Freedom of expression and freedom of the press remain fragile. Journalists face law suits (and consequently prison) for reporting on government secrets and scandals, which are numerous and poorly hidden. The owner of the TV station Tounsiya remains in prison after the court acquitted him of charges (filed by the government) and ordered his release. The head of Businessnews.com.tn was condemned to four months of prison without his knowledge of it (!). And of course, no serious investigations have been undertaken by the government concerning journalists’ allegations, or concerning criminal activities by the extreme right or by the ruling party’s militia, called "Committees for the Protection of the Revolution."

The possibility of political assassinations of opposition leaders and journalists has become a reality. In October, Lotfi Nageth, the head of the Nida Tunis Party in Tataouine (a town in southern Tunisia), was beaten to death by a crowd of extreme right thugs. The government maintains it was a street brawl, however, Nida Tunis members convincingly argue that the ruling religious party was behind this death, making it the first political assassination. Last Wednesday (Feb. 6), Chokri Belaïd, an activist lawyer under the dictatorship and head of the Democratic Socialist Party, was shot in front of his home. Four bullets: to the head, throat, heart, and right shoulder. The precision would indicate a professional. 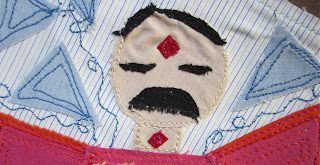 The use of a gun is unprecedented. Nobody in Tunisia may own a firearm, except hunters with special permits. The government's inability to control the sale of illegal arms from Libya appears suspicious. Rumors suggest that the ruling religious party is stockpiling them as well as extreme right groups.

A red line has been crossed. Under the dictatorial regime Tunisians suffered arrest, beatings, and torture, however, cold-blooded assassination has never been a part of this culture. On Wednesday, two million angry people took to the streets to protest across Tunisia. Wednesday evening, the Prime Minister, Hamadi Jeballi, declared that he would form a temporary government of technocrats until elections could be held, which opposition political parties have demanded since last October when the government's mandate ran out. On Thursday, the ruling religious party declared that they did not approve of the Prime Minister's proposal and they are maneuvering to oust him. Obviously, all those incompetent ministers don't want to lose their well-paid jobs.

Today, Friday Feb. 8th, was Chokri Belaïd's funeral, which was declared a national day of mourning by all the political parties except the ruling religious party. A general strike was called for all of Tunisia as well.

And so, my sketchbook page turns to political assassination because one must not remain silent. I chose a child-like style and bright, clear colors because Chokri Belaïd had no bodyguards and walked out of his home innocently. 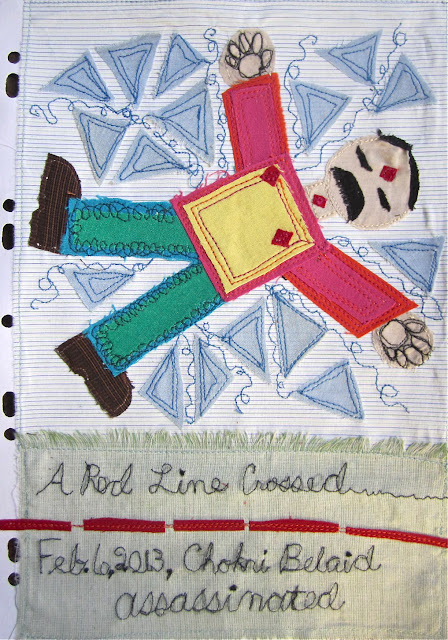 The triangles represent a shattering--the shattering of a life, of a family, of civil society.
Maybe there will be a larger piece...my mind is boiling, Tunisia is boiling
Labels: sketchbook, Tunisia

I am speechless at these atrocities. Thinking of you and all people in Tunisia.

I know you love where you are, but i'd be getting the hell "out of Dodge"! Be safe!

thinking of you always and wishing for more peaceful times.

Such unrest--we hear very little of it here. Please keep yourself and family safe.

I have been following the events in Tunisia and thinking of you (the only person I know there) so, although the news is not good, it is good to hear from you. The picture is as it should be-direct. My heart says be safe, be well. I hope you can. Paradise was never so precious, but you must think about leaving/ Watch closely and know that your life is precious to those of us who watch from a far.

Geez, Nadia, what horror you have to live with. It puts all the political shenanigans that happen here into perspective. I certainly hope you're situated out of the fray, as it were, also that your husband is safe, being Tunisian. Like Arlee says, though, maybe it's time to consider a move, as life-shattering a prospect as that might be. Be well my friend. Blessings to you both.

I am worried for your safety too. You are well informed about what is going on but it all sounds pretty scary.

This is so very sad. It is good to read your thoughts as a person who is actually there, and I do hope that you will continue to safe and able to continue to express yourself. I wish for a quick turnaround in this terrible political climate. Tunisia is a country I have long dreamed of visiting, but will continue to postphone a trip until the atmosphere goes far below a simmer. I admire your strength and wish for your safety. Peace

Nadia, I usually lurk on your blog, and always enjoy what you have to show and say. Like your other friends here, I'm getting concerned for your safety, and just wanted to add my hopes for a calming of the political situation and for your safety. You probably have no idea how many people you reach (and touch) through your blog.

I can only imagine. But even in the United States, we seem to be moving toward a totalitarian government. Bypassing of Congress and ignoring our Constitution are all too common.

I'm so sorry to hear about these sad events in your country! The odd thing is that I've heard nothing on our local news at all, which is unusual, we get good worldwide coverage! Stay safe!!

How frightening and disturbing! I pray that you and your loved ones will stay safe and that your adopted country will recover from all the turmoil without terrible bloodshed. I hope also that your loved one does not suffer another health scare. What an opportunity for expression through art! Many people are thinking of you and your fellow countrymen and women. Keep safe, my friend.

Almost forgot! I will be in Tanzania next week - a safari trip. Many, many miles from you, I know, but I will be thinking of you.
Deb

speechless. but holding you.

As they say 'hope for the best but prepare for the worst'. May you and yours be blessed with safety and wisdom in these turbulent times.

I don't know you, nor have I read all of your blog, yet ... but I am literally shaking as I type that you could be so close to such terrible danger ... I'm with arlee, too, ... if at all possible, 'time to get out of Dodge' !

We were talking about you at bee this week and wondering how safe you really are over there. So concerned for you! Are you coming over soon!? Please be careful.

Nadia, my concerns for your safety are the same as expressed by the above comments. I cannot even imagine living in that political turmoil and unrest. Be safe!

I don't know if it is scarier to live without knowing what is going on, or to know. I pray for your safety.

it was big news here nadia, i was thingking about you a lot.
take care!

The turmoil in Tunisia is very saddening, it must leave you wondering where the justice is. Your quilt is apt.

Your journal page is very much "to-the-point". The news are shattering - and I just hope things will turn to the better. Please, stay safe !!!

A terrible thing has been recorded by you in a beautiful way.

am sitting here with all my hackles up, you are very brave Nadia, sending stand strong & shine vibes through the ether!

Nadia, I heard about this assination on our local news. Its very troublesome to hear of continuing hostilities in your country, do take care Nadia, you are so brave to put this posting up.

Hi Nadia
As I expect you will embroider and draw something about the situation in Tunisia. I am following all the Arab news development and see how it becomes worse.
Take care
Najlaa

you are a brave woman, reading your story here brings all that happens in your part of the world so much closer to home.....I'm glad all we have to deal with is snow&cold.

I left a comment over at snippets first, because that is where I entered your world.

Nadia, I do so appreciate your perspective on events from a region that is often misunderstood or misrepresented by our media. Like everyone else, I am concerned for your safety and well-being. Please, do whatever you must for you and your family to be safe!

My husband and I have been following the issues in Tunisia. I just read him your blog of Feb 8. You and your are in our thoughts and prayers. Keep safe! I worry for you.

This is so sad. I hate to think of anyone killed. I do hope the unrest will be calmed before more violence happens. Wonderful piece of work that you have created - and very important for people to remember.

The passion and the love that you feel for Tunisia show through your words.