Despite continued blistering temperatures, the end of summer approaches. The Little People, my 5-year-old granddaughter (Gd5) and my 10-year-old granddaughter (Gd10), have come and gone. We had a good time and I miss them, but school beckons. Here’s a review of the summer program at Grandma’s Boot Camp (so named because Grandma tries to stick to a schedule as opposed to everybody else letting things totally fall apart as befits summer vacations). 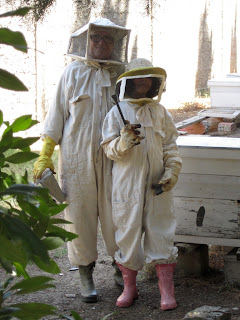 Science study:
We visited the beehives and opened them up. 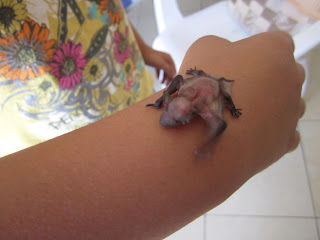 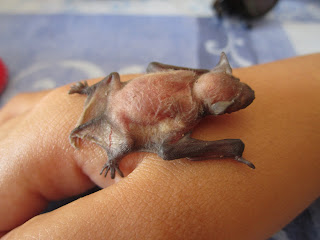 We found a baby bat that fell out of its nest under the roof tiles. I love my bats. Six or seven reside under the roof tiles in very tiny spaces and come out at sunset. They eat bugs, especially mosquitoes, so I have no objections to their presence. They have amazing agility, using a sort of finger-hook at the bend of the wing to get around. Unfortunately we couldn’t find the nest to put him back.

Art projects: I set up a table with paper and paints and notebooks and other supplies.
We did art journaling and used Dawn Davies Sokol’s book Doodle Diary: Art Journaling for Girls, which I would recommend for others who might want to organize a summer boot camp. 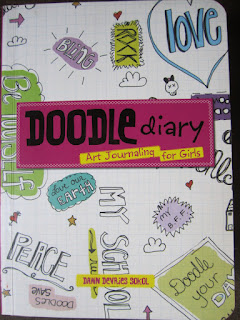 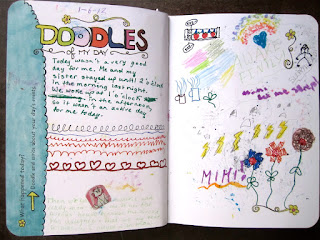 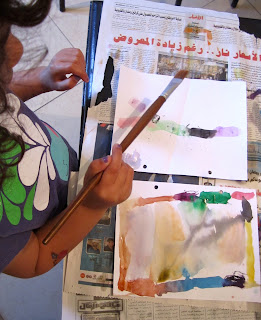 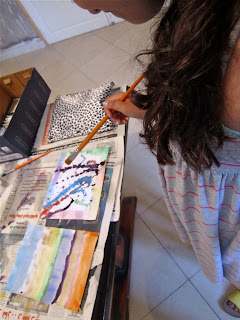 However, the campers seemed to prefer drawing and painting on blank paper.
Each camper had her own loose leaf notebook and pens, which she received at the summer birthday party where we celebrated three birthdays. And so, we painted and drew.

We drew the fig tree in the yard one morning.

Music, Reading and Language Arts: Campers practiced piano almost every day. They also had French and Arabic, immersion-style. Of course, reading time was part of the schedule. Gd5 is learning to read with Grandma (she got through Dr. Seuss's Green Eggs and Ham) and she chose to incorporate words into her fig tree drawing as well.


So words are very important at five. While reading Green Eggs and Ham, we came across the expression "here and there" many times. I explained the sound that "th"makes and Gd5 practiced it. Then she said urgently: "But Grandma, it should be "d". It's "here and dare"." !!!


Watercolor painting was a popular activity among campers. Somehow Gd5, before even attending kindergarten, has developed a rigid critical inner voice. Drawing within the lines is a must.


Painting with watercolors helped her express herself more freely.


Gd10 started with backgrounds and then built them up from there.

Then one day she picked out her favorite colors. 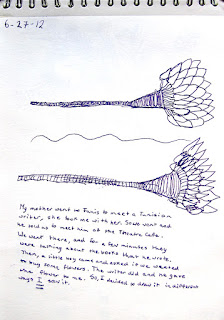 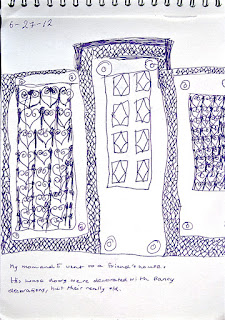 Gd10 also had a field trip into Tunis with her mom and took her sketchbook.

More science study:
We watered the garden and watched the zinnias bloom.

Yes, the Little People have come and gone.
It was a busy summer that flew by, but now, the silence is deafening.
Labels: drawing, grandmothers

What a lovely post!! Indeed Little People know how to fill up the space in a home LOL! I'm sure they enjoyed their Bootcamp and got more out of their holiday than perhaps they would otherwise!

Your grand daughters are very fortunate to have such an energetic and inspiring bootcamp leader! I really enjoyed reading this post Nadia. We home schooled our 4 girls and it brought back such memories for me.
I hope it cools down for you soon. Take care. xo Carole

U R a wonderful grandma. Next year I want to come too!

How much fun your grandkids had-lucky them with you for a grandmother. Thanks for commenting on my blog.

I bet they loved organized activities. Kids are so creative when they are given the right environment.

Can I be HGd (Honorary Granddaughter) next summer??!! It looks like a fun time was had by all! Lovely :)

Looks like a good time was had by all, despite the hot weather you did a lot.
It is winter here - looking forward to warmer weather although we really have a mild winter compared to other places. Thanks for your comment.

They are such a special times spent with the Little People! You are creating beautiful memories for them:-) Although I see our Little People several times a week, I love those times. I treasure my memories spent with my grandmother and I hope my grandchildren will treasure theirs one day :-)

Boot camp sounds wonderful!! So much wonderful creativity. I loved seeing all the beautiful art that was produced. School holiday with my grandmother were so special, I know your grandchildren will treasure the memories of these happy days you share.

wonderful post....makes me wish I had gone to boot camp too. Sounds like the girls really enjoyed and appreciated your involvement too. They will always remember them.

Such a wonderful post! I remember spending hours in the summer afternoons with my colors and papers.
They will have long lasting memories from this boot camp. They are so artistic. This actually reminds me of the story you told about your teacher back in the days... I wonder they will write something similar when they grow up.

Such talent! I love the vivid colors..they are so talented! How lucky they are to have you! It's always hard when they leave...but you have given them fabulous memories!

Aren't your grandkids lucky to have a grandmother like you! I'm sure this will be a summer to remember. I loved the journals.

What a fantastic camp. Great ideas to not only keep kids busy and interested but...also you shared your love of art and science!

* I have enjoyed each and every post for the last few weeks but...haven't had a chance to comment. Your trip to Egypt reminded me so much of vacations I have taken in Mexico. Don't you love cultures with rich textile traditions? Cheers! I bet you are pooped! Mary

You look like a very good Grandma to me. Your grandchildren will remember this their whole lives. It is special and precious.

Oh, boy, Nadia! I had great grannies but from a different era so they never did this sort of thing with me , i would like to be YOUR granddaughter too but I would not like MY number after GD!! Scary thought. Lovely post. Congratulations?

Love your grandkids's art work! I taught art camp for my nephews when they were young and loved seeing the creativity that came out!

Wow, this is grandma time, I'd better start taking notes! I completely missed the time with my real Gramma's as they had both passed on before I was born. But my surrogate Gramma's were kind and gentle teachers, just like you!

Can I come to the next boot camp? Looks like it was great fun. :)

Wonderful post and great time and memories to keep.
Undoubtedly you all had a marvelous time together.

I was very moved reading this post, I have fond memories of my Grandmother teaching me how to knit and to sew. She was a very uncommunicative woman, but she left this gift to me.
Your GDs will never forget you. I hope that I will be able to transmit some ctrativity to my GC one day.

I want to be your granddaughter! What a fun time.

Here from SpiritDiaries - and your visit to my blog.