Go Relax at the Beach

Possibly, just possibly, I expressed too much negative sentiment concerning the beach and I consequently jinxed myself and all of Tunisia. Allow me to rectify. There exist several good things about the beach and one of them is that everyone spends days on end relaxing in the sun and swimming. In the past, things like increases in food or gas prices often occurred in the summer while everybody was basking. Sneaky, but effective.
Recent events suggest that this pattern has been interrupted, and not for the better--the government ordered a curfew June 12th after mobs rampaged in several areas. The spark: an art exhibition in which several paintings were judged morally inappropriate by the vocal extreme right minority. What "morally inappropriate" means remains unclear. The last day of the exhibition several men requested that the gallery take down certain paintings done by a woman, or there would be consequences. The gallery refused and the police came, which did not deter aggressors, who also attacked several police stations and a courthouse later in the evening.  Rioting occurred in the Medina (Old CIty) of Tunis as well. And as if things weren't bad enough, we can now say good-by to the tourist trade for this summer, further aggravating unemployment. The head of the religious party in power maintains that all goes well in Tunisia. Maybe he's living in a parallel universe...
On a lighter note, beaches provide possibilities for finding treasures,
notably seashells.
Seashells III (Dec. 1998, 40"x56"/1mx1m41) is machine appliquéd, pieced and quilted.
Seashells V (Dec. 1998, 38"x72"/96cmx1m79) is machine appliquéd, pieced, and quilted as well. 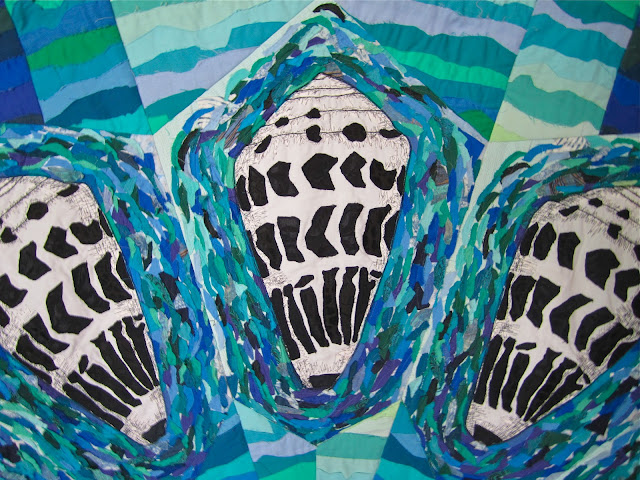 The water effect is created by bits of fabric sewn down to a foundation fabric.
This piece brightens my living room. 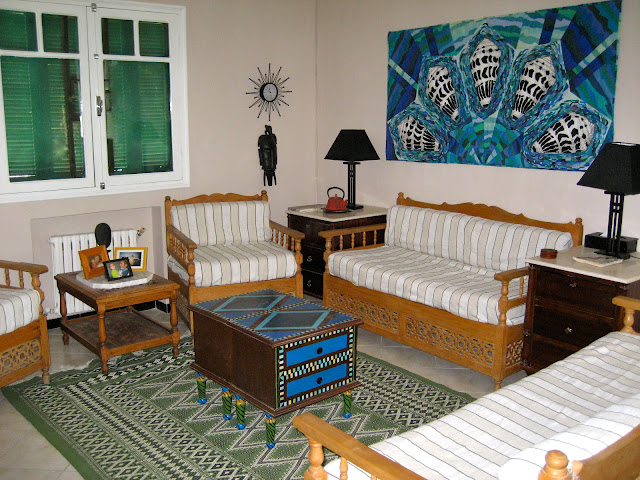 And may I suggest that everybody head for the beach and cool off ???
Labels: Art quilts, Tunisia

Oooooh, it's beautiful!! I love the colours and the movement and I also like how it ties in with the table in the middle!

I instantly thought of you seeing these sad happenings in the streets of Tunis. I nearly could not believe it. A pity that art should be restricted in this manner. "Spring" movements are not over yet, it seems.
Anneliese

post much better...sigh, love seeing your lovely shells and love seeing inside of your living room. Now a pix please of your Olive trees..how innocuous is that:)

I really love how it looks in your living room!

Craziness is everywhere! Google about the random violence in Chicago near the hospitals....young kids beating up people and running away laughing??? WTF???Geesh.....

interesting post. I went back to look at your previous musings about the beach. wonderful quilt on the wall in your wonderful living room. I always am excited to see a post pop up from you in my google reader. please keep them coming!

I love your shell pieces. Sorry about the curfew, that really sucks. Just when I think things are pretty retrogressive in the U.S., I'll hear about conservative religious fanaticism somewhere else. Cooling off at the beach sounds ideal. Unfortunately, where I live it's never warm enough to cool off at the beach!

Its stunning! I'd give my left arm to be able to make a piece like this!

What a wonderful piece and so nice for those of us who don't have a beach to enjoy.

Nadia, you are a talented woman. I wish I lived close enough to check out your sewing, quilting, making art or otherwise room. I just can't get enough of that living room piece. Seashells V is exquisite!
Loved to hear your rant about local events too! Keep it coming, I like to hear what's really going on!!
All the best,

Oh dear! I see patriarchy raising it's ugly head again!!!! What a pity that the short sighted and narrow minded can exert such negative force around art, I pity them really, because can you image what life must be like between their ears? empty and bitter!!!....
Your work as always such a delight!!!!!!

Interesting post, as usual. How sad that there are such narrow-minded people in the word. But how great that there are people like you. I LOVE the shell piece on the wall. How did you make the shells? Are they painted or appliqued?

What a beautiful and unusual wall hanging! The pieces of fabrics sewn on the foundation look so neat!

There seems to be unease and distress all over the world. We live in an interesting (?) time.

Hi, Nadia - I am sorry to hear that things there are tense. Sure puts a highlight on my gratitude for some of the things I take so for granted here in Rainsylvania. Be safe, my friend.
I do love the water effect you got in you shells work.
xxoo, sus

All our wishes for moderation and understanding and patience and cooperation just aren't enough to calm down so many parts of the world. My wishes for less tense times are sent your way.
Your seashell projects are alive and wonderful! You're a very patient lady, creating those detailed seashells. Thanks for sharing your very special creations.

I'm sorry to hear about the unrest in your city! Your quilt looks great, beautiful. Love the living room. Thanks for sharing - Hugs Nat

Never a dull moment in your part of the world. I really hope it settles down!! Your wall hanging is beautiful!!! It makes me think of - She sells sea shells on the seashore.

Oh wow! your work is just amazing!! and it looks just perfect in your living room!
xoxo

Living in an area where tourism prvides mot of the work here, & the views are so important I feel for the people who've lost their living. It's unimaginable. You can loose yourself in art tho & your interpretation of the beach is stunning, as is your breakfast below (I'm catching up here!) I do hope you won't be judged 'inappropriate' speaking out here!....

We live in a mad world. The riots we had in London this time last year were shocking and seeing homes and business' burnt and looted makes you dispair so I hope things settle soon in your part of the world. Your stunning and beautiful seashell wall hanging lifts the heart!

Such an interesting post. You always help me see the issues in your part of the world so much more clearly.

And the last sentence was priceless.

Happy Summer and keep gong with the art and writing. It is all good and important stuff!

With those problems at the beach, it's good that you can enjoy the lovely quilt on your wall to remind you of better times. The world has gotten crazy.
Thanks for commenting on my blog.

You never cease to amaze me! Wow!

On the subject of unemployment and loss of tourism due to the bungling idiots... we've got them in Libya too. grrrrr....

That's too bad. There seems to be unrest and rioting everywhere these days.

Your quilt is exquisite! The blues and the shells make me think of our days on the beaches in Florida.

And your living room looks so inviting! Come sit for awhile..

I am so sorry to hear of the Turmoil in Tunisia. And the "morally" inappropriate art. Very discouraging.
However, your seashells are brilliantly done. The colors are so vibrant and such great design. I could stare at the wallhanging over your sofa all day!

Thank you for your blog, I wish I was one of your neighbours. It makes me sad the oppressive way that women are treated by some groups. I find their beliefs to be frightening. It makes my heart sing though that you create such beauty in this environment. Light always finds its way through darkness. x

wow!!! that is gorgeous what an impressive quilt, fantastic!!!!

what incredible quilt/art pieces these are~!!~
your work is exquisite and i love that it gets 'center stage' within your living room. i thought that the radiating lines within your quilt echoed the clock nicely as well as the colors within the table . . . wonderful~!
i find myself thinking how i might like to visit with you in your beautiful home and share ideas and then realize that i am too much of a coward. i'm not sure how you deal with the unrest/violence in your part of the world on a daily basis and i admire your 'head up' and 'onward' attitude. i am sometimes so sad in regards to the lack of humanity and freedom within certain (more and more) parts of the world but there you are smack in the middle of it and a shining beacon of love, patience and tolerance. bless you and may you and yours be kept safe.

Sometimes I am frightened by the intollerance and consequent violence that there is in the world, including (and especially) families.
Sometimes it is difficult to believe that humanity has evolved at all.

Oh I LoVe the seashells, beautifully executed!
Thank you for sharing the happy beach memories.