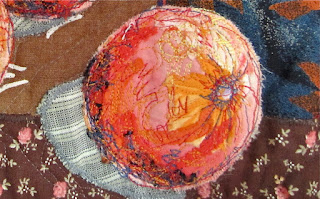 Susannah Fiberchick put in a request for some close-ups
and I now have “ Oranges from My Garden” in front of me, so I can oblige. 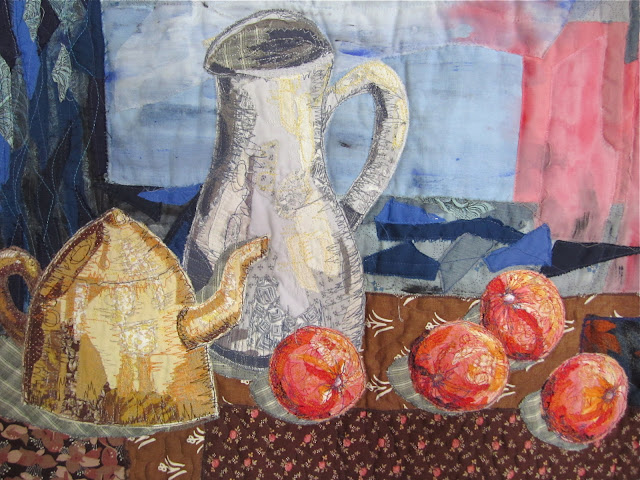 Often, the interesting things appear in the details, if one pays attention.
I used acrylics lightly on the background. 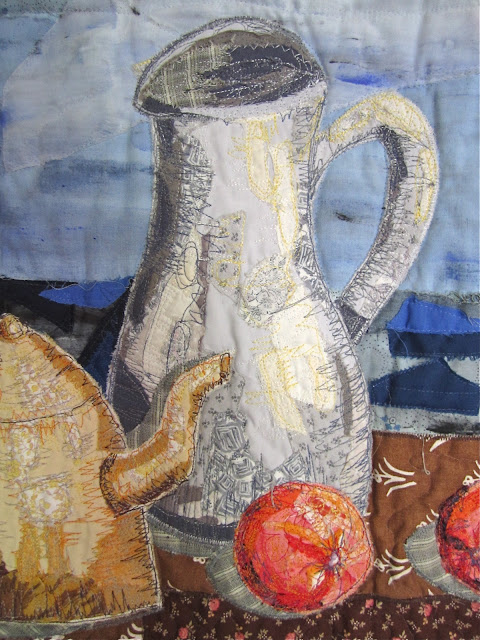 All fabric is recycled clothing. 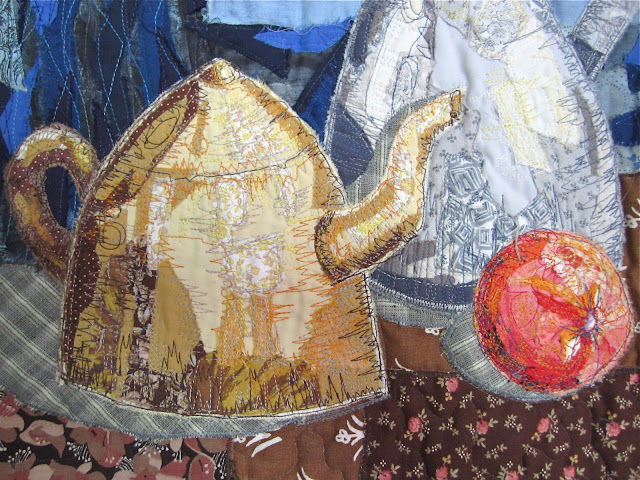 Bits of fabric sewn down and thread painting create the illusion of depth. 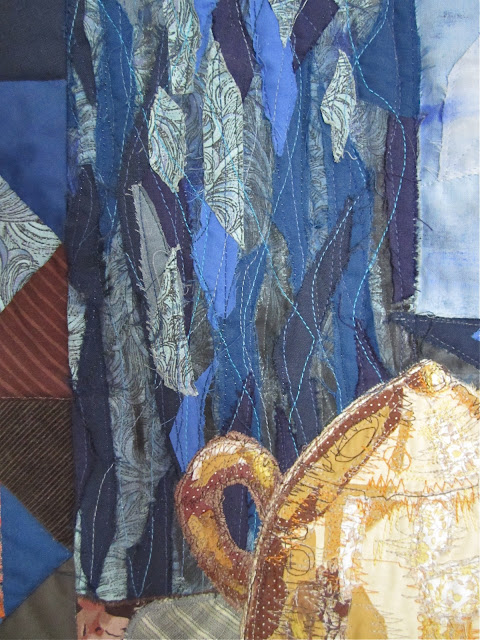 Of course, here I nearly smack you in the nose with the details. 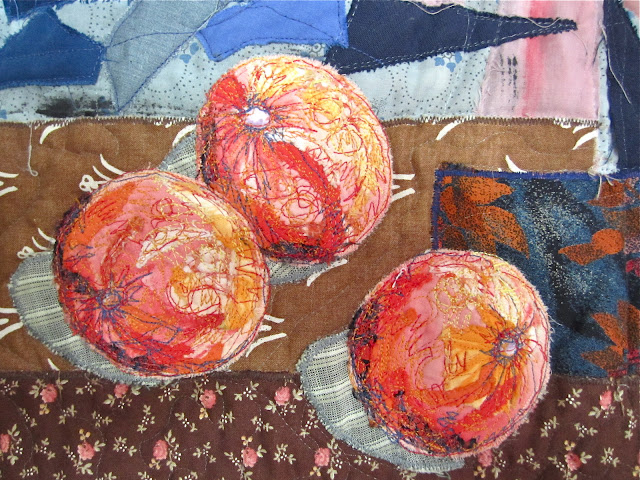 In addition, I would like to announce my presentation, which is open to the public, at the University of Tennessee in Knoxville.


Title:        "You're Not Modern If Your Women Aren't Modern:
From Colonial Feminism to Nationalist Feminism in Tunisia"


I talk about the changing representations of women as seen through women's magazines and how debates about modernity affect women. Here's the publicity picture:
This Tunisian women's magazine cover from 1937 shows an extravagantly dressed servant carrying a woman on a platter, which suggests an Orientalist perspective on the European artist's part. The monkey and the lush foliage contribute to this idea. The rather odd position of the woman on a platter (ready to eat?) also suggests ambivalence toward emancipated women. And I would argue that women still battle that ambivalence today.
Labels: Art quilts

Great request from Susannah: so we can áll enjoy the details of your work Nadine !
Wish you lots of succes with the presentation (there sure is a lot to be said about the subject ....!)

It's great seeing your details. So painterly. Do you know of Edrica Huws? We'll be in Knoxville just briefly on April 15, flying in and then leaving. So close, but no cigar. Heck. Your talk sounds very interesting.

First, beautiful what you make from old clothes.
Second, i WISH I could attend your talk- it sounds really interesting. Always a topic I enjoy learning more about.

Wonderful artist you are!! I just love it all.

I'm not an artist, I cant draw, sketch or shade to save myself... I wish I could be a fly on the wall when you're just starting a project like this as its mind boggling how some old clothes could become something like this!

delightful detailing! And, when have women not battled the ambivalence of the Patriarchal and Colonialist world?
Something is always expected of the female and often enough that expectation is the error of our plainly human myopia. Expectation is foisted on the male beings as well. And so it goes....and look where it's got us.....some progress, much retrogressing. Hope might lie in the view that the Human Race is still in the two year old stage, and since everything is hurtling faster onward with a highly developed technological speed....perhaps maturity will leap forward as well before extinction wins the day.

Love your piece "orange from mygarden"! It's great and the stitchings are great,
Edith

Wow, when I first opened your post, I thought I was looking at a painting of "Oranges from my Garden"!Which of course it is, but "painted" with fabrics and stitching. It is so beautiful.
Good luck with your presentation :)

Wonderful work with recycled clothing. Really love seeing closeups. Congrats on your upcoming presentation. I had no idea you were a scholar -- although I might have guessed it by your detailed descriptions last year about changes in your region.

An impressive piece of work. Thank you for sharing the closeups with us.

Great to see your work up close, Nadia. I am so impressed with your use of recycled clothing. -sus

Thank you Nadia!!! I love these shots. You are so talented! Your lecture sounds fascinating too...

A stunning piece, Nadia -- I love looking at the ways you express your creativity. Kudos to you for the very timely lecture, as well -- I hope everyone out there is listening.

Thank you for the close ups, Nadia. They only serve to make me appreciate your art even more. Just beautiful!

This is the ultimate recycling! Actually I should say Up-cycling as the result is a stunning work of art. Thanks for the detail shots.

I am sure your lecture will be a great success: women everywhere have to face so many difficulties.
Annick

The close-ups of your work is truly amazing! You have a wonderful talent, I just wouldn't know where to start with work like that! And the fact that you used recycled cloth too, all adds to such a wonderful visual feast!!!

Your lecture sounds truly wonderful - I would love to attend something like that! The publicity picture IS very interesting, I also notice that her mouth is covered......
That this subject should come up when last evening I watched on ABC (Australia) television, they broadcast a documentary on 'Forced Marriages' here in Australia and New Zealand among the Pakistani and Afghani communities - quite shocking really, especially as these cases also involve dreadful domestic violence and threats of death to young girls as young as 12. Good luck with your lecture, would a transcript become available sometime later?

Really cool, Nadia! I shall alert my daughter to the exhibit. She is a PhD candidate at the U of T at Knoxville! She will love to see your work too.

WOW !! The details are breathtaking. I enjoyed every single picture. Would love read/hear you talk if you have a link somewhere?

Your work is so mind bogglingly amazing!! Thanks for sharing close ups. Your talk would be so interesting.

Incredible picture, and this of 1937 is inspiring: thanks!! (I don't know today: i am unable to find ideas in english words!)

Nadia what an inspiring piece of artwork ......x