Underwater Garden and the Big Mama

All right. It’s not an underwater garden, it’s a garden that is under water. 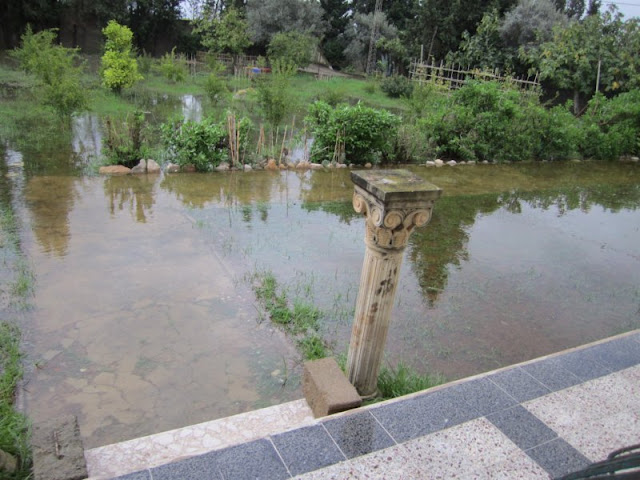 Yes, I was in the middle of a flood this week. Tunisia gets little or no rain from June to September. This year we had one storm in September (which hardly counts, just barely settled the dust), and then we finally got a good storm in mid-October. By my calculations we went for about five months without any substantial precipitation. The driveway this week: 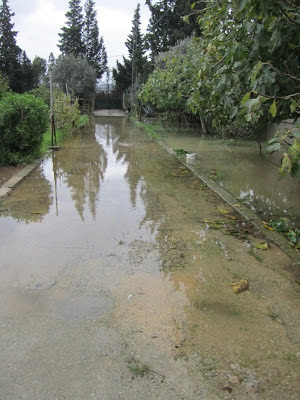 So if it rains for a straight twelve hours or more, there is nothing but trouble. And it rained pretty steadily for three days. Here is my new bamboo fence with rock border (submerged) that I just finished. This makes a good "before" picture. 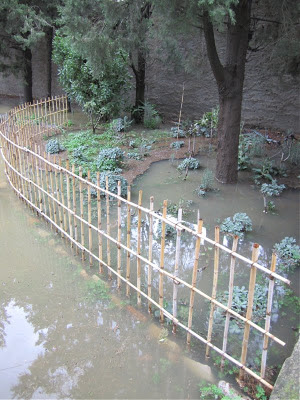 The road in front of our house. 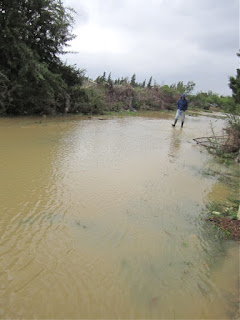 It’s also bad in towns and cities because, although there are drainage systems, they are not well kept up and easily overflow, resulting in flooded streets and stalled cars. Of course, Tunis beats Cairo, which apparently doesn’t have any drainage or run-off system at all because it would just fill up with sand. So when it rains (once in a blue moon) all the underpasses and low spots fill up with water resulting in nightmarish, snarled traffic.
In my area, a oued (pronounced ‘wed’, a dry riverbed) overflowed after heavy rains in 1982, making it the worst flood I’ve seen. We were in the middle of a river. Of the five steps leading to our front door, three were covered with water. That was close! Our liquid petroleum gas bottles (weighing around 50 kilos or over 100 lbs) were swept off to the neighbors' house, some 500 meters away.When the water receded, we shoveled silt into wheelbarrows for days—horrible stuff that turns into a cement-like crust if not removed.
The good news: unlike the recent New York snow storm, our telephone, electricity, and internet services have continued to function—thankfully. Although we did get out the candles just in case. No complaints, then, especially as I found myself with lots of time to work in my studio. I was finally able to finish the Big Mama, which I have been working on a couple hours a day for four months. She’s big. 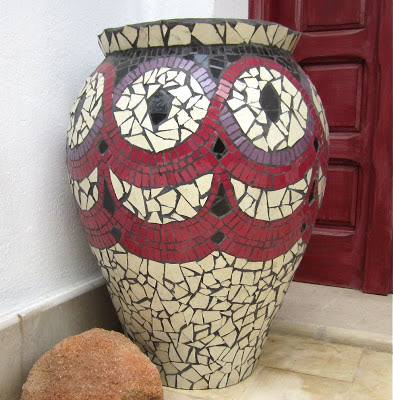 This pot stands 22”/55cm high. The toothy grin was quite unintentional. I’ll have to wait until things dry out to plant it. 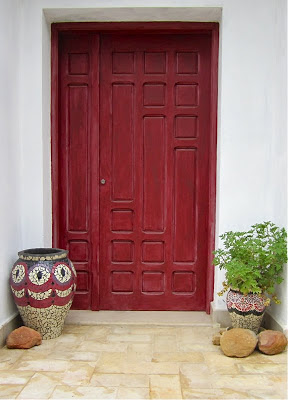 The smaller pot is planted with scented geranium. 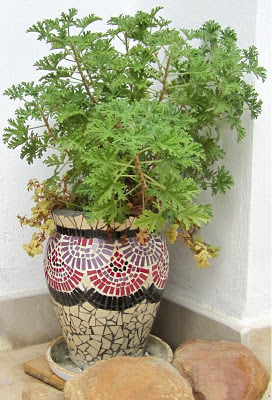 Joke of the week: A section of the garden had stagnating puddles of water, so six weeks ago we informed the water company that the water pipe in front of our house probably had developed an underground leak--and then we called them five more times. When did the water company send out its repairmen??? Yup, last Monday in the middle of the flood.  They'll come back when the area dries out.
And as temperatures have not dropped significantly, I can look forward to knee-high grass and weeds, and swarms of flies. I swing a wicked fly-swatter… 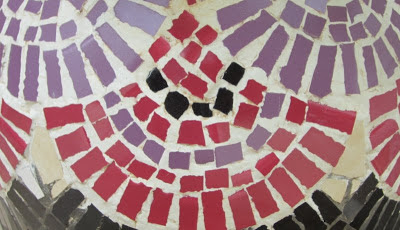 News Update: Tunisia has successfully held elections for a constituent assembly with only a few snags. The moderate religious party, An-Nadha, garnered 40% of the vote and is seeking partners to form a coalition to run the government. The American government appears to accept this state of affairs. French politicians seem worried. They weren't particularly worried when there was a dictator who had "98%" of the "vote." Do you see a disconnect here? We hope that a government can be formed peacefully.
Labels: garden, mosaic plant containers, Tunisia

Your garden is so formal that under water it looks like a beautiful Victorian swimming pool at least in the first few shots. Big Mama is lovely as usual and like quilteuseforever i too love your insider's view of Tunisia. Your reports are fascinating...

I also love your insider reports! It sounds like things may be looking up for your government? I hope so. Big Mama is wonderful, and looks great there by your door!

Hi, Thanks for your comments on my blog, my girls are really beatiful ;)

By the way, I love your work, the quilt with the doilies and caps is going to be perfect.
And the green quilt history is going to last for your children.

Ooooh Nadia, I hope you overcome the flood well (sorry, I knów it must be terrible but I had to giggle a bit seeing all that water in your "dry river" ....)
Wow: big mama looks wonderful and smaller mama is gorgeous too!
(love that dark red on the pot and the door !!)

Looks like interesting times in art,politics,and weather. Big mama is a beauty. And I don't envy you and all the clean up after flooding. good luck. :0) Take care, Nadia.

What a beautiful place you live in despite the recent flooding. Those new pots are gorgeous. Glad to hear things are looking up in Tunisia...wish things would start to improve here!

Nadia, Big Momma and the smaller pot are amazing! They look beautiful by your door. Glad to hear the election was peaceful. Loved your joke! Take care. Carole

You seemed to take everything in strike. I like how you called under water garden. Save you watering it this way. I love love your big mama pot and the red front door is very smart. I can imagine your house as a gallery! I saw your elections on our television news. I hope you are happy with the result?
Hugs
Nat

Thank you one and all for stopping by and commenting. I might add that we've been lucky this time. We're only dealing with rain water so there shouldn't be too much clean up. And surprise, surprise, the water company did get the leak repaired yesterday, 4 days after their first visit.
best, nadia

Oh my goodness... we've had our share of flooding in these parts this year, so I can really empathize with you. I hope all settles soon. I just love the photos you share, they are so beautiful (regardless of the circumstances)...

Oh God! I know the flood problems, You know in Pakistan almost every year we face floods! our government is too much corrupt, no work just corruption!
well I like your Mosaic as usual, its really CREATIVE!
Have a blessed Eid Day my dear

We might not be as bad as Cairo or Tunis, but we rea pretty bad in Italy too, see all that has happened in Genova and the poor women who died with their children.
Big Mama is a beauty, so is her daugther with scented geranium and the door is outstanding.
I do not envy all the work that you have to put in digging your garden, good luck!

So sorry about the flooding. The election sounds promising.
We had some bad flooding here following Hurricane Irene. Still recovering, tho I am lucky, no flooding near my home.
I love both of your mosaic pots.
Kathy

Dear Nadia...
Big Momma is beautiful! I hope your garden is back to normal very soon. Peace to you and yours...

Wow crazy pictures of the flooding- glad you and your family are ok! Hope everything is back to normal soon.

Hi Nadia, I'm your newest follower! Thanks for stopping by my blog...I so enjoy "meeting" people in blogland, sometimes from the other side of the world from little South Carolina! I really enjoyed reading some of your older posts -- I'll be back!

Nadia, Big Mama is really quite grand! So interesting hearing about your flooding and the current news from the inside of you country. I laugh about the timing of your plumbing repairs! love, sus

I totally love your Big Mama (and her name.) I didn't see the teeth at first - just the design. Thanks for the news flashes. I love to hear about other countries.

That is a lot of water! I hope you manage to get rid of it soon.
Big mama looks beautiful!

Sorry about the flooding, it's a lovely garden!

The pots are magnificent...great scale and design!

I was thinking of you on election day!

With all the tumult going on around you it is amazing you seem to be able to create such beautiful expressions and ideas.

So many different kind of work - and so beautiful too - you have made.
How are you doing after the flood?

both pots are gorgeous. all that water though? gah! fingers crossed for the political situation.