What is it about black and white that makes it so appealing? The absence of all colors and the sum of all colors, two extremes. Is it the clarity? You can’t argue with something that is black and white; you can’t squabble about it or dispute it if gray areas do not exist. With a click on the computer or the choice of a pen, we can write in any color of the rainbow, still, black on white strikes me as the best choice for getting ideas across and for communicating clearly. Visually it is a dramatic combination that is stark in its beauty and simplicity and yet does not shun other colors to join in. It’s difficult to resist the temptation of using it…I admit to succumbing frequently.  Even in the garden.

And so, I introduce my garden chairs--they looked bad. The Before: 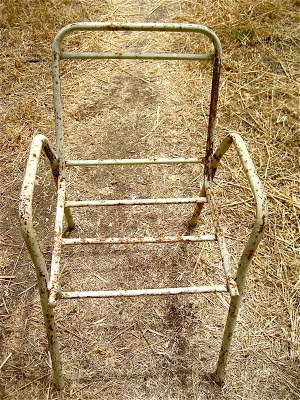 All right, “bad” was an understatement; this is heavy duty recycling. The After: 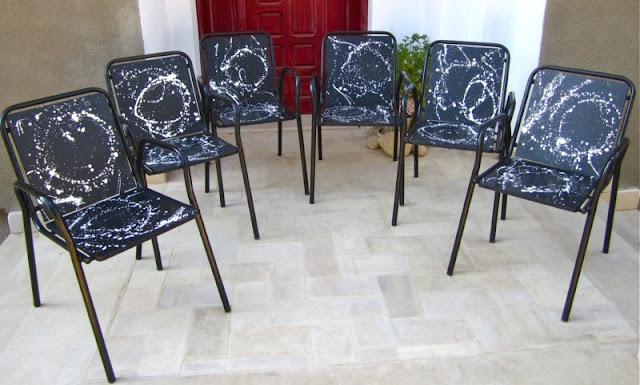 Phew! Just love that black and white paint. The local carpenter cut mdf boards to replace the disintegrated plastic backs and seats. As no kids were around at the time, I got to do all the spatter painting myself…the kids are so envious.

Because our roof is flat and made of cement, it requires treatment every two or three years and so over the years a number of plastic buckets accumulated from said treatment, which I planted about ten years ago. When I began doing mosaic plant containers, I hoped to get rid of the buckets (plastic: how un-green, how un-ecological), but, upon closer inspection they proved to be holding up well, much better than the buckets in which the roof products are now sold. Black and white paint to the rescue…The Before: 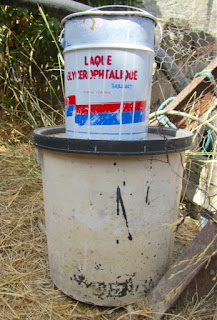 Of course, the smaller paint bucket asked to be included as well. The After: 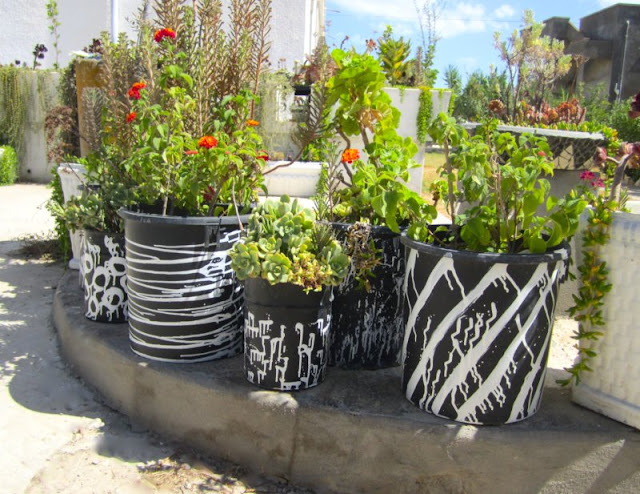 Here they are lined up on a curb that will someday be mosaicked… someday. 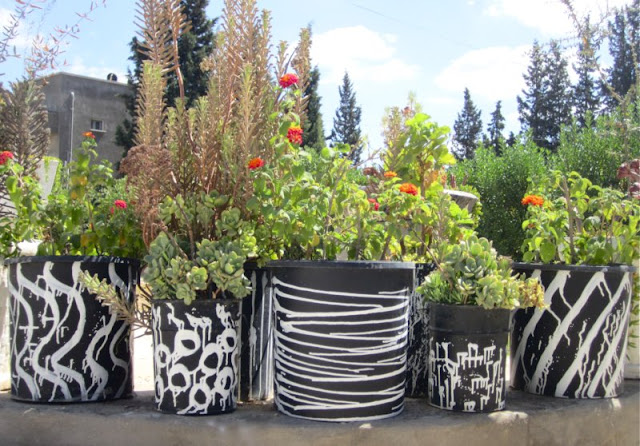 That's the ol’ throw-the-paint-at-the-bucket treatment in which young visitors participated (hard to calm them down after that activity). Notice the tall spindly-looking succulent behind the bucket with circles?  It's a cousin to the "Mother of millions" succulent and drops its offspring from the tips of its leaves everywhere. More importantly, however, it puts on a winter show of flowers from the end of December to the end of February that is spectacular. Consequently, I overlook its scraggly appearance. 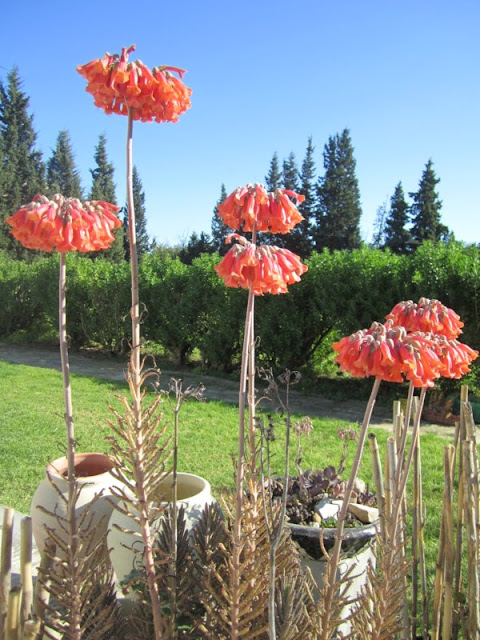 Nadia, Your entry below is so powerful, and your quilt so beautiful that I am struck with very few words. I cannot imagine living so near such turmoil. Still, you have fun, hope and optimism. That is true strength. I am in awe.

Wow Nadia that last one ! You're saving the best bit to the last !!!! When I looked a bit closer after you mentioned the name I though: o yeah, but with the last pic it really was : WOW !

Wow, Nadia, your bad chairs look amazing, your quilt is stunning, and I love your pots! Very clever girl!

Hi Nadia,
Black and white always adds harmony to bright colours and patterns.
I always loved how Matisse used it to balance his paintings.
They will look great in your garden.
M x

Nadia...Thank you for the nice comment on my blog. I can see that we are like minded women. I have always wanted to mosaic the planters. It is too bad that you cannot just walk over here to Charlotte, North Carolina and we could do it together!, But, I am grateful and awed that we can communicate in what seems to be a million miles away. Diane

How fun! You've given me a new appreciation of black and white.

Nadia, you are so creative with your decoration said buckets and chairs. I do appreciate your effort to recycled things around you. You are a woman of my heart. Thanks for looking after our environment! "Mother of millions" I didn't know that what there were called. The flowers are stunning! What I love about living expatriates lives is, you can get any made. I do miss my Indian tailor in the souq - Thanks for sharing such interesting post - Hugs Nat

Wonderful..i love the idea..you are also having a cute creative blog,i will love to follow my muslimah sister's blog :)
i hope you will like to follow back :)

Hi Nadia. Just found your blog this morning. LOVE the shells in black in white.

The shells are wonderful...and the buckets, well, they are a very elegant surprise. Nice job.

One of my most influential profs at university allowed no color in our student work which had the most powerful effect on my awareness of formal issues in painting. Your buckets have lots of humor in them! -sus

Hi! Greetings from Finland! I am so happy to find your blog! I LOVE it! It's so interesting. I love your works!!! It's so nice to see other quilters etc. from far a way. I love to see photos from crafts, flowers, places etc. Thank you very much for your blog!!!! Have a nice day!
Yours, Ulla

I love the look of the black and white! And what you did with those chairs is amazing. Great job!

Thank you Nadia for your visit to my blog and your nice compliment.
I am, after six years of blogging, still in awe of the fact that I can communicate with like minded people from around the globe.
Your chairs are recycling at it's best.

Wonderful transformations!! Just amazing :-) I can definitely see how it would be hard to calm them after all that fun.

Thank you for stopping by my blog and leaving a comment so I could click back to your blog and "visit" Tunisia. I absolutely love your quilt ideas.

love it, love it, love it!!! If I could remember to water my pots I would SOOOO do this. Or maybe I could just have a cool collection of empty buckets.