The Pen, Part I

Living under a dictatorial regime has its drawbacks, one of the worst of which is the lack of freedom of expression. Tunisia and North Korea competed for the number one spot in the “Repression” rankings. Why buy a newspaper when the same nonsense spewed forth day in and day out? Information went through secondary channels, especially the téléphone arabe (gossip), which could be surprisingly accurate thanks to a persistent oral culture coexisting with a more easily controlled written culture. In oral traditions, the sources are important. Here's how it works (fill in the blanks):

Tunisian 1: I heard that Ben Ali Baba & his 400 thieves went to__ and did__.
Tunisian 2: Well, here's what I heard that Ben Ali Baba did, he ___.
Tunisian 1: What's your source?
Tunisian 2: My source is___.
Tunisian 1: Well, my source is better, it's___.
So whoever produces the best source, the source closest to the story, wins. It's a self-correcting mechanism that works amazingly well. By the way, the last dictator's name is Ben Ali.  I couldn't resist the "Ali Baba and his 40 thieves" reference.
Newspapers, magazines, radio and TV were all affected. Graduating lycée (high school) students--who are assigned their major and campus--listed journalism toward the end of their preferences, if not their last choice. They were to be pitied if assigned to journalism.  In the universities, the regime’s heavy-handed policies tainted intellectual circles as well. Knowledge was adulterated while history was erased and re-written. Everyone knew what had to be said to keep a job—or what could not be said. The arts of innuendo and self-censorship became second nature. And if you were not a member of the one ruling party, then your chances for promotion in your career became nil, unless you were self-employed.
And so, I began to wonder about the proverb referring to the pen and the sword. Would “Might is Right” win the day? However, being a rather straightforward and uncomplicated person (right is right and wrong is wrong), I continued to believe in Truth and channeled my indignation into an art quilt. 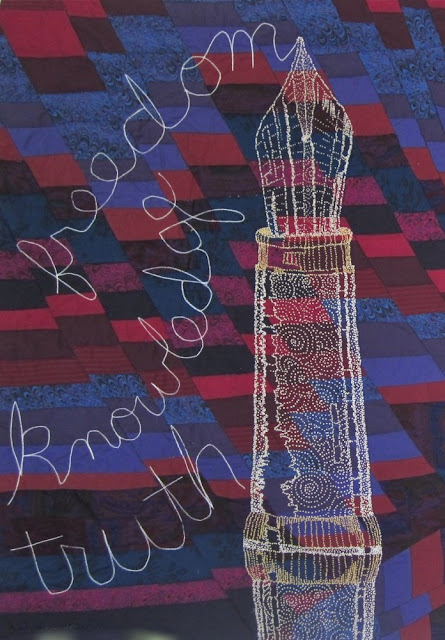 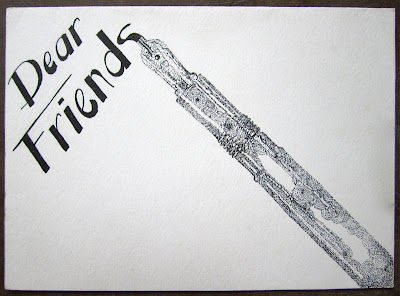 I had been playing with dots and spirals as a design element. 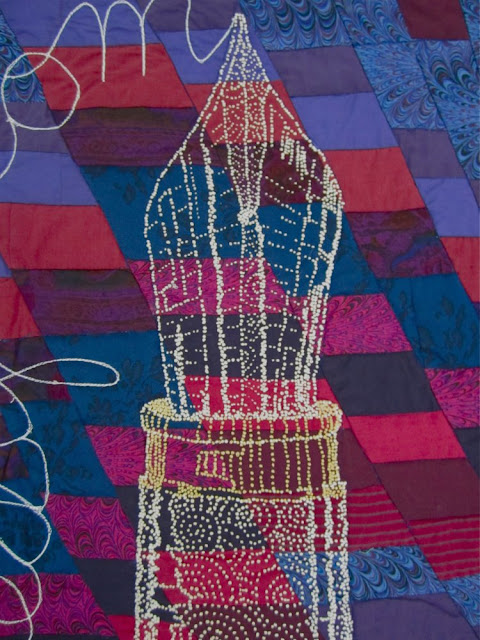 For those who know something about embroidery, the pen is made of hundreds of French knots, just French knots. I carried this project around with me for three years...and haven't done a French knot since.       (To be continued)
Labels: Art quilts, Tunisia

French knots for 3 yrs sounds like torture to me. Thank you for the lesson on oral tradition. You are so interesting as is your life!

I can relate to your reaction to working French knots. I did an embroidery of a West Australian Wattle tree, and lost count of the French knots at 2,000. There were french knots on top of french knots to create texture and in the end like you, I did not want to see another french knot. However thankfully that has passed. The photo of the tree is on my blog under the heading creative embroidery.

I love French knots! could do them forever...thanks so much for the comment...I hope you have cooled down now!!

Hello Nadia. I'm very happy to meet you. I'm your newest follower. You are not only a talented quilter you have very interesting political thoughts as well. Thank you for visiting my blog!

Thank you for your comments on my quilt Nadia.
I love the colors and the embrodery of this quilt.
The pen design looks as magic.
Art make possible to "talk" to others on truth, freedom and knowledge when the verbal talk isn't possible.

Hello Nadia, thanks for visiting my blog and your kind comments. Your blog is really interesting en we indeed share our love for quilting en re - using old material. I will follow you and hope to read more of your nice, educating posts!

Thanks Nidia for visiting I've gone quilting blog. Love the pen with all of those french knot's! I really love seeing the pictures of the buildings, fountain and vase awesome. It felt like 104 in Tennessee. I'll be glad when it cools down some for fall but not winter, it ends up just being icy roads. I will be a follower and come back for some more neat thing to look at.

I haven't done French knots for a long time and can't imagine making that many. Thanks for visiting my blog and leaving a comment. If you would like replies though you need to enable your email address (dashboard page, edit my profile, check "show my email address", scroll down and SAVE). Also in settings, change your comments to "pop up window'.

Thank you all for your kind comments. Cheryl asked about how I learned quilting--I learned on my own during the 1980s (with the help of some good books). Thanks to need and desire, I've done my fair share of bed quilts, pillows, etc. But I had taken art lessons as a kid and into college. So for me, drawing, painting, quilting, sewing--those are all techniques. It's what you do with it that counts and it's ok to break rules, although good technique and fine craftsmanship count for me. For awhile I designed and made crib quilts and sold them in a store in Tunis (exhausting production work). It's around 1991 and the Gulf War that it all came together--I had something to say and enough ideas and technique to do it. I also had built a good collection of fabric gleaned from the flea market. I sincerely believe that it is liberating to work with "recycled" fabric. If I had gone out to buy fabric, the expense of it would have crippled my creative flow!

well thennadia, you should check out this blog. it incorporates all the criteria you mention..being green by recycling fabric, breaking the rules, lots of hand work,... slow cloth methods...also some hand dyeing...definitely story telling. you will like it! guaranteed!
http://spiritcloth.typepad.com/

I see you have a blog buddy in Tenn. You'll have to meet her when you come visit me! The weather in TN is something else... I just killed a cockroach that was sprawling through my bed. It must feel like heaven for insects. Your french knots are beautiful, but I'm proud to say that I am the owner of this quilt now (as my mom gave it to me for my BD) and it is supposed to go on the wall in my office at UT! Thank you mom! I passed my HS exams using this pen, it was a fountain pen, and deep down, I believe it brought me good luck. Mostly, it allowed me to have beautiful writing in English, French and Arabic. You are something else!

that pen is magnificent. haven't read much on your blog yet but i will. just had to comment on the pen with all those french knots.

How wonderful - amazing quilt - you are very talented and don't know whether I would do all those knots. Annie Schuiling

I loved this before- now I love it even more after reading the meaning behind it. Really nice. see you soon. And thank you for your comments on my erosion bundle.